The 10 Skills Modern Teachers Must Have 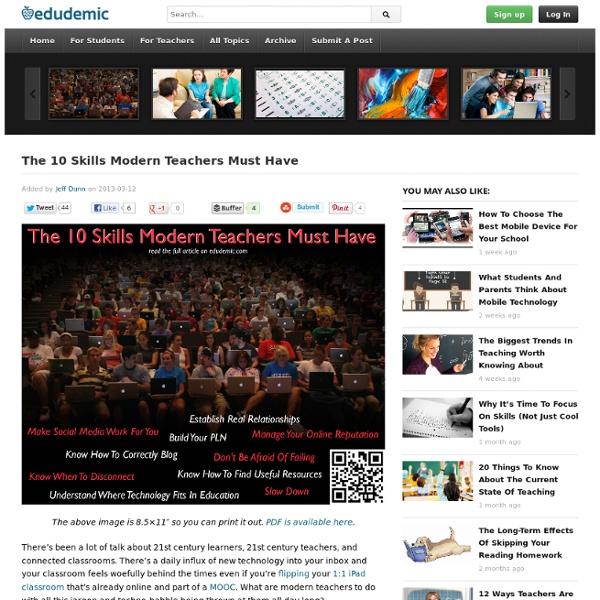 The above image is 8.5×11″ so you can print it out. PDF is available here . There’s been a lot of talk about 21st century learners, 21st century teachers, and connected classrooms. There’s a daily influx of new technology into your inbox and your classroom feels woefully behind the times even if you’re flipping your 1:1 iPad classroom that’s already online and part of a MOOC . What are modern teachers to do with all this jargon and techno-babble being thrown at them all day long? Simple. In my experience, I’ve seen teachers attempt to integrate 30 iPads into their classroom by handing them out and then trying to figure out which apps are worth using. In order to do this, you’ll need skills modern teachers must have. 1) Build Your PLN Whether you call it a ‘personal learning network’ or a ‘professional learning network’ is not important. 2) Establish Real Relationships Whether it’s online or offline, the ability to establish real relationships is critical to any modern teacher. 7) Slow Down

The Best Online Learning Platforms Bill Gates Founder of Microsoft Sheryl Sandberg Facebook COO Malcolm Gladwell Best Seller Writter How Does #Edchat Connect Educators August 7, 2012 by tomwhitby For educators who have been connected since the early days of social media, it is difficult to understand the reason people would ask, “What is #Edchat?” We must remember that many educators using social media for professional reasons have joined only recently. The idea of using social media for professional reasons is a relatively new concept. Explainer: What is a 'Gonski' anyway? This week you might have heard the word “Gonski” even more than usual. That’s because the Gillard government finally announced how it would pay for its school funding reform in the lead up to its meeting with the states – who it needs to help fund the changes. Yesterday the states failed to sign up to the reforms but what does that really mean? In order to understand the significance of the reforms, based on the landmark Gonski review on school funding, you need to understand how the current system works, what’s wrong with it and what proposals there are to fix it. The current system Australia’s school funding arrangements are unnecessarily complex, opaque, ineffective and inequitable.

The 7 Most Powerful Ideas In Learning Available Right Now Tomorrow’s Learning Today: 7 Shifts To Create A Classroom Of The Future by Terry Heick For professional development around this idea or others you read about on TeachThought, contact us. Let’s take a look at the nebulous idea of the “classroom of the future.” Math Education is Backwards According to the National Science Foundation, less than one-third of college students who begin an academic track in science or engineering (S&E) complete a technical degree. If the students who already have a strong interest in science are dropping out, what about the students who are less enthusiastic about S&E? Are they learning the basic knowledge they need to pursue careers in business, social science, or law? And even more fundamentally, are all students receiving the necessary education to discern what is opinion and what is fact in the news and in public policy debates concerning science and technology? The answers to these questions, by any objective measure, are troubling. Americans must come to grips with an educational shortcoming whose implications begin personally but extend to our economy and society.

10 ways to change the minds of tech-reluctant staff We often hear about tech-savvy educators and administrators who have an array of best practices and whose love for technology is evident. But as anyone who’s ever been part of a school or district knows, not all teachers and administrators are as comfortable or familiar with technology. In a recent “Question of the Week,” we asked our tech-savvy readers: “How do you get tech-reluctant teachers and administrators to use technology effectively?” Here are our readers’ top answers (edited for brevity). 1. The 8 Characteristics Of A 21st Century Teacher Some call them ‘connected educators’ while other use the phrase ‘digital teacher’ and many prefer the term ’21st century teacher.’ Whatever terms you use to describe modern teachers, it’s important to know what the terms actually mean. There’s a fabulous wiki devoted to just this topic here which houses some incredible bits of information. It’s by Andrew Churches who has curated quite a treasure trove of useful information for any teacher looking to outline what he or she actually does as a modern educator.

Youtube 4 Teachers VIDEO IS THE NEW PEN! (…and it’s mightier too!) The thought makes many people think the world has ended but for 21st Century kids, videoing their thoughts and creations and experiences and then publishing it to the world is as easy as picking up a pen. In fact, most are more likely to have a device ready to film, edit, add subtitles and music than a pen or pencil. I like to think we only ever used pens because we didn’t have a video camera in our pocket, sorry if that upsets anyone. For example, my kids do write poems but performing them as videos makes them really think about the effect their words have on an audience.

Thoughts on Leadership, Teaching & Learning - Moving Teaching from ‘Good’ to ‘Excellent’: Part 1 Colleagues Supporting Colleagues Ross McGill, 29th January 2013 on the state of CPD: “CPD can be a gloomy picture in most schools. Inset days, at worst, are one-size-fits-all chalk and talk in the school hall or even self-directed time which we will inevitably be used for marking or planning. At a Spectator ‘Schools Revolution’ conference, Dylan Wiliam summed up the problem: “The standard model of teacher professional development is based on the idea that teachers lack important knowledge.