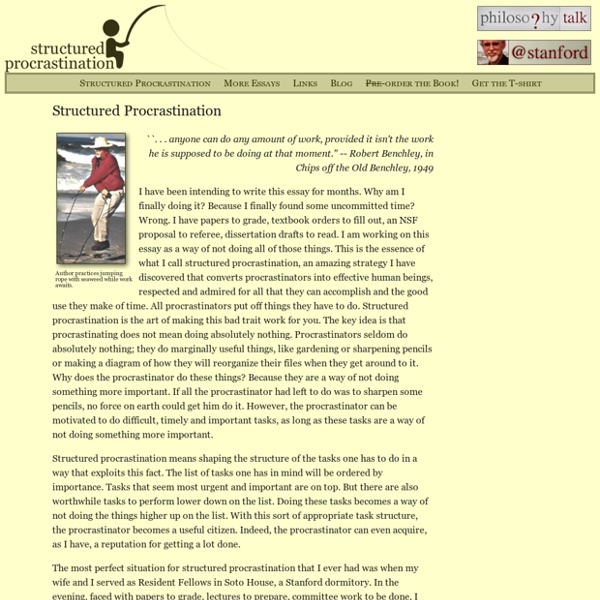 Author practices jumping rope with seaweed while work awaits. ``. . . anyone can do any amount of work, provided it isn't the work he is supposed to be doing at that moment." -- Robert Benchley, in Chips off the Old Benchley, 1949 I have been intending to write this essay for months. Why am I finally doing it? Because I finally found some uncommitted time? Wrong.

The Common Pattern To Procrastination ​​“Think of all the years passed by in which you said to yourself “I’ll do it tomorrow,” and how the gods have again and again granted you periods of grace of which you have not availed yourself. It is time to realize that you are a member of the Universe, that you are born of Nature itself, and to know that a limit has been set to your time.” — Marcus Aurelius If you procrastinate, you’re in good company. The Procrastinating Caveman: What Human Evolution Teaches Us About Why We Put Off Work and How to Stop July 10th, 2011 · 60 comments Survivor: Paleolithic Edition Rewind time 100,000 years ago: several different species of humans co-exist on earth.There was, of course, our own species, Homo sapien, but we were joined by our more athletic siblings from the Tree of Life, Homo erectus, who had left Africa and colonized Asia long before we ventured beyond the mother continent, all the while another sibling, the stocky Neanderthal, was hunkered down in a European ice age.

List of unsolved problems in philosophy This is a list of some of the major unsolved problems in philosophy. Clearly, unsolved philosophical problems exist in the lay sense (e.g. "What is the meaning of life?" Self-Imposed Deadlines Don't Stop Procrastination. Here's What Might. Mark Twain advised people never to put off until tomorrow what they can put off until the day after, and a lot of us listen. Estimates suggest that 15% to 20% of all people are chronic procrastinators, and that share goes up for situational delay: As one example, four in five people put off retirement savings despite knowing better. Then there are the innumerable office procrastinators, many identifiable by the mere fact that they're reading this article.

Procrastination The art of writing is the art of applying the seat of the pants to the seat of the chair. —Mary Heaton Vorse What this handout is about This handout will help you understand why you procrastinate and offer strategies and to combat this common writer’s ailment. Introduction Harry Frankfurt's "On Bullshit" One of the most salient features of our culture is that there is so much bullshit. Everyone knows this. Each of us contributes his share. But we tend to take the situation for granted. Most people are rather confident of their ability to recognize bullshit and to avoid being taken in by it. So the phenomenon has not aroused much deliberate concern, or attracted much sustained inquiry.

4 Habits Of Punctual People Plan any event and chances are one in five of the people you invite will be late. A study done at San Francisco State University found that about 20% of the U.S. population is chronically late—but it’s not because they don't value others' time. It’s more complicated than that, says lead researcher Diana DeLonzor. "Repetitive lateness is more often related to personality characteristics such as anxiety or a penchant for thrill-seeking," she says.

Inc.com The unfortunate reality about the workplace today is that many people under-perform their capabilities. If you took a survey, you'd hear a lot of reasons and explanations for this. We don't have enough staff. I'm too tired. The work is too difficult. Why You Can Never Finish Anything And How to Finally Change It The law of inertia tells us a body in motion stays in motion. And the same goes for projects, creative ideas, daily tasks, half-written emails, and that thing you stopped working on to read this article. When you interrupt a task, it can be difficult to pick it up again. And we are interrupted nearly every three minutes, according to Gloria Mark, professor of informatics at University of California, Irvine. How To Stop Procrastinating: 4 New Steps Backed By Research I don’t wanna. I don’t wanna. I don’t wanna. It’s awful and horrible. I hear it causes cancer. I’ll do it when I feel better.

Why We Procrastinate - Issue 16: Nothingness The British philosopher Derek Parfit espoused a severely reductionist view of personal identity in his seminal book, Reasons and Persons: It does not exist, at least not in the way we usually consider it. We humans, Parfit argued, are not a consistent identity moving through time, but a chain of successive selves, each tangentially linked to, and yet distinct from, the previous and subsequent ones. The boy who begins to smoke despite knowing that he may suffer from the habit decades later should not be judged harshly: “This boy does not identify with his future self,” Parfit wrote. “His attitude towards this future self is in some ways like his attitude to other people.” Parfit’s view was controversial even among philosophers. But psychologists are beginning to understand that it may accurately describe our attitudes towards our own decision-making: It turns out that we see our future selves as strangers.

How I Learned to Stop Procrastinating, & Love Letting Go ‘People have a hard time letting go of their suffering. Out of a fear of the unknown, they prefer suffering that is familiar.’ ~Thich Nhat Hanh By Leo Babauta The Mechanics of Preventing Procrastination Procrastination is, in essence, stealing from yourself. The reason goals are so hard to reach, many psychologists think, is because each person believes they are really two people: Present Me and Future Me. And to most people, Future Me is much less important than Present Me. Present Me is the CEO of Me Corp, while Future Me is a lowly clerk. “Instead of delaying gratification,” people “act as if they prefer their current self’s needs and desires to those of their future self,” write psychologists Neil Lewis of the University of Michigan and Daphna Oyserman of the University of Southern California in a new study in Psychological Science.

Related:
Related:  New tech. and studies done   -  Procrastination   -  Done Delia   -  procrastination productivity   -  Motivation and Procrastination   -  Albino Blacksheep   -  Liveplasma Discovery Engine   -  PointlessSites.com - Fun Things To Do When You're Bored   -  Will It Blend? | Presented by Blendtec   -  Procrastination hack: '(10+2)*5'   -  SKOUT   -  random website dot com   -  29 Semi-Productive Things I Do Online When I’m Trying to Avoid Real Work   -  Funny Videos, Funny Video Clips & Funny Pictures   -  750 Words - Write every day.   -  Whatdoestheinternetthink.net   -  How to Overcome Procrastination Using Self Talk: 9 Steps   -  The Surprising Realities Behind What Motivates Us in Illustrated Form   -  How to Recover from 10 Types of Demotivation   -  The Little Book of Procrastination Remedies : zenhabits   -  60 Ways To Make Life Simple Again   -  Get Off Your Butt: 16 Ways to Get Motivated When You’re in a Slump   -  I Feel Unmotivated   -  Top 20 Motivation Tips   -  11 Ways to Cure Someday Syndrome : zenhabits   -  The Top 51 Time Wasters (Updated for 2015)   -  I Waste So Much Time   -  Idea Framing, Metaphors, and Your Brain - George Lakoff - YouTube   -  How To Motivate Yourself – Self Motivation | PickTheBrain | Motivation and Self Improvement   -  Eat That Frog!: 21 Great Ways to Stop Procrastinating and Get More Done in Less Time: Brian Tracy: 9781576754221: Amazon.com: Books   -  Mystery Cube   -  The Power of Habit: Why We Do What We Do in Life and Business: Charles Duhigg: 3520700000553: Amazon.com: Books   -  How Seinfeld's Productivity Secret Fixed My Procrastination Problem   -  Start Every Day as a Producer, Not a Consumer   -  Study Smarter, Not Harder | Psychology Today   -  How Can I Recharge My Depleted Motivation?   -  Understanding Why Pornography Addiction is a Brain Disease