7 Little Hacks For Getting Ahead In Life (Without Having To Try That Hard) On our 18th birthdays, many of expected to finally feel grown-up. 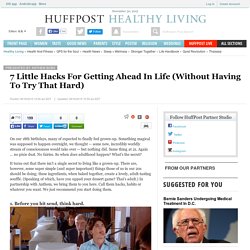 Something magical was supposed to happen overnight, we thought -- some new, incredibly worldly stream of consciousness would take over -- but nothing did. Same thing at 21. Again … no pixie dust. 5 Ways to Finish Your Passion Project (When Watching Netflix in Bed Seems Way More Appealing)  Ah, passion projects. 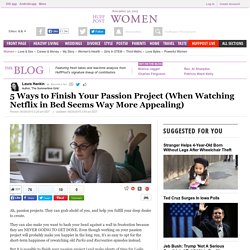 They can grab ahold of you, and help you fulfill your deep desire to create. They can also make you want to bash your head against a wall in frustration because they are NEVER GOING TO GET DONE. Even though working on your passion project will probably make you happier in the long run, it's so easy to opt for the short-term happiness of rewatching old Parks and Recreation episodes instead. But it is possible to finish your passion project (and make plenty of time for Leslie Knope as well)! I started writing a book, The Summertime Girls, two and a half years ago, and it just came out on August 4th. 1. 2. 3. 4.

But sometimes the words just won't come. So, occasionally, I'd just get up and do something else. 5. How To Actually Be More Productive, By The Guy Who Designed Facebook's Productivity Tool. 8 Tips for Finally Conquering Procrastination. How to Overcome Workload Paralysis and Get Back into Action. 8 Steps to a More Productive You in 2015. When we make resolutions, “be more productive” usually ranks a few levels below lose weight, get a raise and travel more. 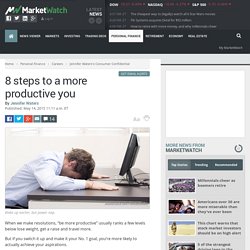 Banish Procrastination by Thinking Differently about Deadlines. What makes some tasks harder than others to tackle? 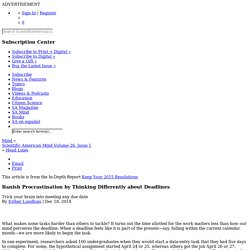 It turns out the time allotted for the work matters less than how our mind perceives the deadline. When a deadline feels like it is part of the present—say, falling within the current calendar month—we are more likely to begin the task. In one experiment, researchers asked 100 undergraduates when they would start a data-entry task that they had five days to complete. For some, the hypothetical assignment started April 24 or 25, whereas others got the job April 26 or 27. Although the groups had the same amount of time, the students with a deadline in early May were less willing to begin the task right away, according to the study, which appeared in the Journal of Consumer Research. An experiment involving 295 farmers in India had a similar outcome. 9 Ways to Harness Your Willpower. 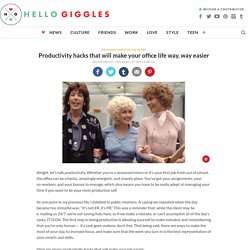 Whether you’re a seasoned intern or it’s your first job fresh out of school, the office can be a hectic, amazingly energetic, and chaotic place. You’ve got your assignments, your co-workers, and your bosses to manage, which also means you have to be really adept at managing your time if you want to be your most productive self. At one point in my previous life, I dabbled in public relations. A saying we repeated when the day became too stressful was: “It’s not ER, it’s PR.” This was a reminder that, while the client may be e-mailing us 24/7, we’re not saving lives here, so if we make a mistake, or can’t accomplish all of the day’s tasks, IT IS OK.

Listening To Your Body Clock Can Make You More Productive And Improve Your Well-Being. From an early age, we're taught that getting up early is good for us. 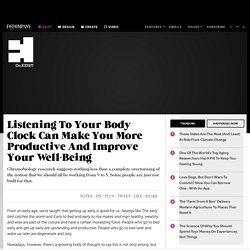 Sayings like The early bird catches the worm and Early to bed and early to rise makes and man healthy, wealthy and wise are part of the culture and have a certain moralizing force. People who go to bed early and get up early are upstanding and productive. People who go to bed later and wake up later are degenerate and lazy. Nowadays, however, there's a growing body of thought to say this is not only wrong, but also counterproductive. Research into our internal body clocks—what's called chronobiology—shows that people have naturally different sleep patterns and therefore work best at different times of the day.

The implications of internal clock research are profound. The start-early norm may be most damaging to kids because the incidence of B-types is highest in younger years (see chart). Schools in Denmark, which have experimented with different start times, have also seen positive results. 7 Ways to Just Get It Done. A Strategy to Manage Your Time That You've Never Thought Of. How to be the most productive person in your office — and still get home by 5:30 p.m. Some days the to-do list seems bottomless. 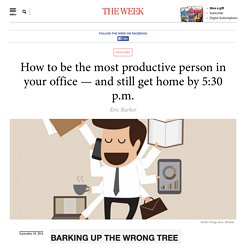 Just looking at it is exhausting. We all want to know how to stop being lazy and get more done. I certainly want the answer. So I decided to call a friend who manages to do this — and more. Cal Newport impresses the heck out of me. He has a full-time job as a professor at Georgetown University, teaching classes and meeting with students.He writes six (or more) peer-reviewed academic journal papers per year.He's the author of four books including the wonderful So Good They Can't Ignore You. And yet he finishes work at 5:30 p.m. every day and rarely works weekends. Why You Can't Do What You Know You Need To. 6 Ways to Get Anyone to Do Anything. 4 Steps to Stop Procrastinating. 5 Ways to Make Your Day Work for You. 7 easy ways to increase your willpower. In general, people have an overly positive vision of themselves and their abilities. 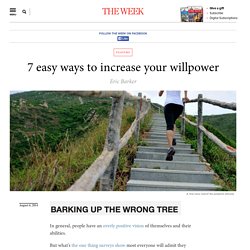 But what's the one thing surveys show most everyone will admit they have a problem with? Self-control. 6 ways to motivate yourself (backed by science) We all go through fallow periods when it comes to our work — it's normal that we're not all going at 100 percent every day (that's a recipe for burnout). 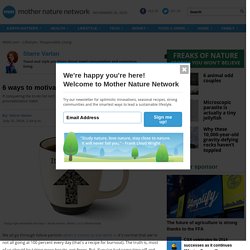 The truth is, most of us should be taking more breaks, not fewer. One Surefire Trick For Increasing Your Willpower. 6 Things Super Productive People Do Every Day. Related: Celebrate The Harvest Season At The Ultimate Fall Food Festival 2. 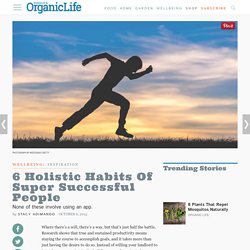 They Exercise RegularlyWhether it’s hiking, trail running, or practicing hatha yoga, doing even a small amount of exercise on the regular can have a ripple effect on other areas of productivity and success. In The Power of Habit, Charles Duhigg says that working out habitually, even as infrequently as once a week, can make you more productive at accomplishing other goals in your life, be they work-related, spiritual, or personal. Consider this yet another reason to plan a weekend hike or start biking to work with a co-worker. 3.

Related: The Best Kind Of Yoga For Your Personality. 10 Productivity Hacks That Will Change Your Life  Life is hard. It's full of chores that have to be done and errands that need to be run, much of which stands in the way of the stuff you actually want to do. If you're feeling spread thin, here are some productivity hacks that will make you better at actually getting stuff done: 4 Subtle Differences Between Workaholics and High Performers. Workaholism, he says, looks similar to high performance on the outside—but they’re actually nothing alike. Gordon has spent a great deal of time doing research and conducting experiments on himself to understand the difference between workaholism and high performance. He found that while they both look like hard work, “the big difference is how the individual feels on the inside about who they are in relationships to their work,” he explains.

A high performer works hard in “healthy sustainable ways and feels happy and inspired,” he says. Talks for when you feel totally burned out.