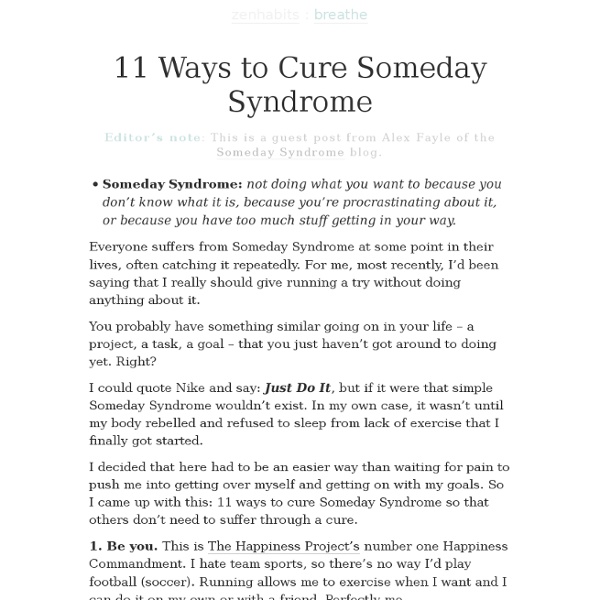 Editor’s note: This is a guest post from Alex Fayle of the Someday Syndrome blog. Someday Syndrome: not doing what you want to because you don’t know what it is, because you’re procrastinating about it, or because you have too much stuff getting in your way. Everyone suffers from Someday Syndrome at some point in their lives, often catching it repeatedly. For me, most recently, I’d been saying that I really should give running a try without doing anything about it. You probably have something similar going on in your life – a project, a task, a goal – that you just haven’t got around to doing yet. Right? I could quote Nike and say: Just Do It, but if it were that simple Someday Syndrome wouldn’t exist. I decided that here had to be an easier way than waiting for pain to push me into getting over myself and getting on with my goals. 1. Maybe you’re not doing something because in reality, it doesn’t fit with who you are. 2. 3. 4. I have a goal of running 20K next November. 5. 6. 7. 8. 9.

A Primer On Oblique Strategizing The Oblique Strategies are a deck of cards. Up until 1996, they were quite easy to describe. They measured about 2-3/4" x 3-3/4". They came in a small black box which said "OBLIQUE STRATEGIES" on one of the top's long sides and "BRIAN ENO/PETER SCHMIDT" on the other side. The Little Book of Procrastination Remedies Post written by Leo Babauta. Procrastination is one of those topics that, it seems, I can’t write enough about. There isn’t a person among us who doesn’t procrastinate, and that’s a fact of life. It’s deep within us. We think we’re going to do something later, or read that classic novel later, or learn French later. But we always overestimate how much we can do later, and we overestimate the ability of our later selves to beat procrastination.

John F. Kennedy John Fitzgerald Kennedy (May 29, 1917 – November 22, 1963), commonly known as "Jack" or by his initials JFK, was an American politician who served as the 35th President of the United States from January 1961 until he was assassinated in November 1963. Kennedy was assassinated in Dallas, Texas on November 22, 1963. Lee Harvey Oswald was accused of the crime and arrested that evening. Jack Ruby shot and killed Oswald two days later, before a trial could take place. The FBI and the Warren Commission officially concluded that Oswald was the lone assassin.

60 Ways to Become The Person You Love photo credit: Niffty.. Only the time and attention we give ourselves demonstrates how much we love and admire ourselves. Self love requires that we place ourselves at the top of our priority list. Self-nurturing is everything that makes us feel positive, happy and joyful. When we decide to honor ourselves with the love we need and deserve like the sun we radiate a glow, touching everything and everyone in our lives. Below are 60 ideas for glowing: How to Get Anything Done Let’s say you had a baby. Congratulations! Your baby is the best human ever! Greening The Ghetto - News Markets Executive Forum 7 traits that separate resilient entrepreneurs from those who just walk away in defeat by Entrepreneurs' Organization

Johnny Cash John R. "Johnny" Cash (February 26, 1932 – September 12, 2003) was a singer-songwriter, actor, and author,[2] widely considered one of the most influential American musicians of the 20th century.[3] Although primarily remembered as a country icon, his genre-spanning songs and sound embraced rock and roll, rockabilly, blues, folk, and gospel. This crossover appeal won Cash the rare honor of multiple induction in the Country Music, Rock and Roll, and Gospel Music Halls of Fame. Cash was known for his deep bass-baritone voice,[a] distinctive sound of his Tennessee Three backing band, a rebelliousness[6][7] coupled with an increasingly somber and humble demeanor, free prison concerts,[8][page needed] and trademark look, which earned him the nickname "The Man in Black".[b] He traditionally began his concerts with the simple "Hello, I'm Johnny Cash."[c], followed by his signature "Folsom Prison Blues".

Beware of Potential I’ve known a lot of artists, writers, and musicians. Without fail, they all had some degree of talent and skill. There is no shortage of talent in the world. 33 Rules to Boost Your Productivity Heuristics are rules intended to help you solve problems. When a problem is large or complex, and the optimal solution is unclear, applying a heuristic allows you to begin making progress towards a solution even though you can’t visualize the entire path from your starting point. Suppose your goal is to climb to the peak of a mountain, but there’s no trail to follow. An example of a heuristic would be: Head directly towards the peak until you reach an obstacle you can’t cross.

Top 10 Most Inspiring Quotes of Lao Tzu Lao Tzu was the most important spiritual Chinese sage. His name, which is also often called Laozi, literally means “Old Master” and is generally considered an honorific. He lived in the 6th century BC, at the same time as Confucius, who was born a generation after Lao Tzu. He once sought out Lao Tzu who told him “Strip yourself of your proud airs and numerous desires, your complacent demeanor and excessive ambitions. They won’t do you any good. Increase your productivity at work by letting go of negative mental clutter My alma mater is currently ranked number one in all of the college men’s basketball rankings. They’ve been in the top spot for 11 of the 14 weeks of the polls, and were number one in the preseason. There are five games left in the regular season, and all of the teams Kansas has left to play would love to see the Jayhawks lose. Colorado, Oklahoma, Oklahoma State, Kansas State, and Missouri fans aren’t the only ones who want to see Kansas mess up their record in the last five games. Fans of the other ranked teams would be happy to see Kansas take a tumble, and, after watching some of the games this year, I’m pretty certain there are a few referees that would be glad to see Kansas lose, too. In competitive sports like basketball, a game has to end with a winner and a loser.

Unknown title Book of Thoth is a name given to many ancient Egyptian texts supposed to have been written by Thoth, the Egyptian god of writing and knowledge. They include a text that is known and has been translated, many texts that were claimed to exist by ancient authors, and a magical book that appears in an Egyptian work of fiction. Texts that are known or claimed to exist[edit] The Egyptians stored many texts, on a wide range of subjects, in "Houses of Life", the libraries contained within temple complexes. As Thoth was the god of knowledge, many of these texts were claimed to be his work.[1] The Egyptian historian Manetho claimed that Thoth wrote 36,525 books.[2]

Related:
Related:  running motivation   -  motivation   -  Motivation   -  lettre de motivation   -  Procrastination   -  Do It Now - Hack away procrastination   -  procrastination productivity   -  Motivation and Procrastination   -  Student Motivation Strategies   -  Albino Blacksheep   -  Liveplasma Discovery Engine   -  Structured Procrastination: Do Less & Deceive Yourself   -  PointlessSites.com - Fun Things To Do When You're Bored   -  Will It Blend? | Presented by Blendtec   -  Procrastination hack: '(10+2)*5'   -  random website dot com   -  29 Semi-Productive Things I Do Online When I’m Trying to Avoid Real Work   -  Funny Videos, Funny Video Clips & Funny Pictures   -  750 Words - Write every day.   -  Whatdoestheinternetthink.net   -  Free Word Search Maker - make personalized word search puzzles with images, clues, or text hints   -  How to Overcome Procrastination Using Self Talk: 9 Steps   -  The Surprising Realities Behind What Motivates Us in Illustrated Form   -  How to Recover from 10 Types of Demotivation   -  Building Self-Confidence - Stress Management Skills from Mind Tools   -  The Little Book of Procrastination Remedies : zenhabits   -  60 Ways To Make Life Simple Again   -  Get Off Your Butt: 16 Ways to Get Motivated When You’re in a Slump   -  I Feel Unmotivated   -  Top 20 Motivation Tips   -  The Top 51 Time Wasters (Updated for 2015)   -  I Waste So Much Time   -  Obvious to you. Amazing to others. - by Derek Sivers - YouTube   -  Guy travels the world and shoots 1 second of footage in each location (Video)   -  How To Motivate Yourself – Self Motivation | PickTheBrain | Motivation and Self Improvement   -  Eat That Frog!: 21 Great Ways to Stop Procrastinating and Get More Done in Less Time: Brian Tracy: 9781576754221: Amazon.com: Books   -  The Holstee Manifesto: Lifecycle Video - YouTube   -  MOTIVATION - PAIN IS TEMPORARY - YouTube   -  Want People to Return Your Emails? Avoid These Words [INFOGRAPHIC]