Tips and downloads for getting things done 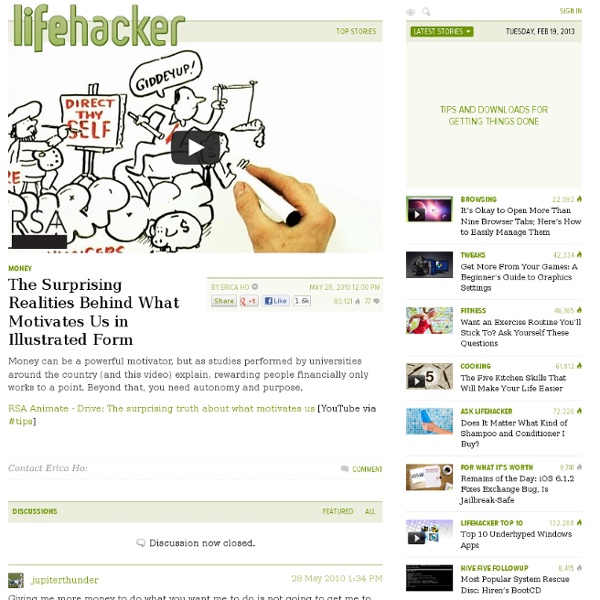 @Blueluck: Very true - I've seen other countries where people leave their family in another country to go find work, and then to manual labor for extremely cheap just to be able to send it all home to their family. I guess that could be interpreted as their purpose, but the work is not purposeful in and of itself. I guess "pay enough to take money off the table" covers that, so we're only talking about how to motivate people after they're at the comfortable level most Americans that read this blog are at. Interesting results in India, though. I believe there is a threshold that once you're paid a certain amount, you feel on top of things like you deserve it, so you don't work hard to move up further. If you take money completely off the table, or put the carrot completely away, there's not much to work for anymore. I think that's one reason government employees aren't known for super service. @Blueluck: Its completely subjective, is the answer.

29 Semi-Productive Things I Do Online When I?m Trying to Avoid Real Work You don’t always have to work hard to be productive. Productivity can simply be the side effect of doing the right things. So here’s a list of 29 semi-productive things I do online when my mind is set on avoiding ‘real work.’ ChangeCycle.com The Change Cycle™ Model Change has always been a necessary aspect of life and work, and our world is changing more rapidly than ever. It is likely that you will have to cope with a variety of changes in the near future. Your success and fulfillment - your emotional, mental, spiritual and physical well-being - depend on how well you adapt to change. People react, respond and adjust to change in a sequence of six predictable stages. The Change Cycle model identifies the thoughts, feelings and behaviors associated with each stage of change.

Family tree of the Greek gods Key: The essential Olympians' names are given in bold font. See also List of Greek mythological figures Notes External links The Little Book of Procrastination Remedies Post written by Leo Babauta. Procrastination is one of those topics that, it seems, I can’t write enough about. There isn’t a person among us who doesn’t procrastinate, and that’s a fact of life. It’s deep within us. Spanish Present Subjunctive Home / Verb Drills The subjunctive is not a tense; rather, it is a mood. Tense refers when an action takes place (past, present, future), while mood merely reflects how the speaker feels about the action. The subjunctive mood is rarely used in English, but it is widely used in Spanish.

The Now Habit In this post, I present a mind map with the full summary of the book The Now Habit: A Strategic Program for Overcoming Procrastination and Enjoying Guilt-Free Play. Despite a cover that reminds me of the “remarkable” Windows 3.1 ‘Hot Dog Stand’ color scheme, I don’t have much to say about The Now Habit other than it’s one of the most useful books I’ve ever read. Since its publication back in 1988, it has become well-known among chronic procrastinators looking for ways to overcome this crippling condition, and for very good reasons. The Procrastination Habit As the title of the book suggests, procrastination is a habit — it’s not caused by lack of organization or lack of time management skills. If you’re looking for time management tools as a way to overcome procrastination, I suspect you may be getting yourself just another set of toys to play while you procrastinate.

18 Imaginative Thinkers Break Your Creative Block — Luke Copping Photography - Blog It happens to all of us at some point – you are driving along the creative highway unaware of some oncoming cerebral roadwork slowing the road down to one lane. You lose your focus for one second and BAM!!! You slam headlong into a creative wall. I asked seventeen of the most creative photographers, designers, bloggers, and creative industry professionals I know (and threw myself into the mix for good measure) to weigh in on how creative difficulties affect them and what they do to beat back the tide of artistic fatigue. Ikea Science Fiction by Susana Polo | 11:53 am, May 9th, 2011 I could make some joke here about how Ikea directions always make me feel like I’m expected to build something that’s bigger on the inside, but I actually have never had that much trouble following Ikea directions THERE I SAID IT. Seriously, if you’ve ever put together some Lego sets, you already have all the experience you need. No, the problem I always seem to have is with the furniture where you have to pick up extra parts that aren’t expressly mentioned all over the boxes of the parts you already have, and I find that I’ve left a vital element of a bed, like the bits that hold up the mattress, at the warehouse. And then I sleep on the couch. (via College Humor.)

100 Websites You Should Know and Use Entertainment Meet David Peterson, who developed Dothraki for Game of Thrones There are seven different words in Dothraki for striking another person with a sword. Among them: “hliziﬁkh,” a wild but powerful strike; “hrakkarikh,”a quick and accurate strike; and “gezrikh,” a fake-out or decoy strike. Celebrating Squee Last week's foray down Sarcasm Boulevard was extremely cathartic for Doctor Merlin, and she was gratified to see that many of her gentle readers also took part in both the catharsis and the (far more important) discussions being addressed. Alas! Some of the responses, even those from Doctor Merlin's very dearest friends, also read last week's diatribe against Internet Idiocy as including a grudge against those who choose to revel in their squee. To clarify, Doctor Merlin is specifically annoyed with those fans who, after exhausting their own supplies of the other derailment techniques, boycott communities and fans still discussing the uncomfortable topics and create spaces with "No Srs Bzns" on the doors, which effectively shuts up those pesky dissenters.

11 Ways to Cure Someday Syndrome Editor’s note: This is a guest post from Alex Fayle of the Someday Syndrome blog. Someday Syndrome: not doing what you want to because you don’t know what it is, because you’re procrastinating about it, or because you have too much stuff getting in your way. Everyone suffers from Someday Syndrome at some point in their lives, often catching it repeatedly. For me, most recently, I’d been saying that I really should give running a try without doing anything about it. You probably have something similar going on in your life – a project, a task, a goal – that you just haven’t got around to doing yet. 101 Ways To Live Your Life To The Fullest “Your time is limited, don’t waste it living someone else’s life. Don’t be trapped by dogma, which is living the result of other people’s thinking. Don’t let the noise of other’s opinion drown your own inner voice. And most important, have the courage to follow your heart and intuition, they somehow already know what you truly want to become.

2_Darwin%20tree-11130.html from suntimes.com When I began as a film critic, Jean-Luc Godard was widely thought to have reinvented the cinema with "Breathless" (1960). Now he is almost 80 and has made what is said to be his last film, and he's still at the job, reinventing. If only he had stopped while he was ahead. That would have been sometime in the 1970s.

Related:  Video • Interesting Videos • how to • Videos
Related:  Procrastination/Motivation   -  self improvement   -  Procrastination   -  procrastination productivity   -  Motivation and Procrastination   -  Albino Blacksheep   -  Liveplasma Discovery Engine   -  Structured Procrastination: Do Less & Deceive Yourself   -  PointlessSites.com - Fun Things To Do When You're Bored   -  Will It Blend? | Presented by Blendtec   -  Procrastination hack: '(10+2)*5'   -  random website dot com   -  29 Semi-Productive Things I Do Online When I’m Trying to Avoid Real Work   -  Funny Videos, Funny Video Clips & Funny Pictures   -  Whatdoestheinternetthink.net   -  How to Overcome Procrastination Using Self Talk: 9 Steps   -  Handbook for Life: 52 Tips for Happiness and Productivity   -  How to Recover from 10 Types of Demotivation   -  The Little Book of Procrastination Remedies : zenhabits   -  60 Ways To Make Life Simple Again   -  Get Off Your Butt: 16 Ways to Get Motivated When You’re in a Slump   -  I Feel Unmotivated   -  Top 20 Motivation Tips   -  11 Ways to Cure Someday Syndrome : zenhabits   -  The Top 51 Time Wasters (Updated for 2015)   -  How To Motivate Yourself – Self Motivation | PickTheBrain | Motivation and Self Improvement   -  Eat That Frog!: 21 Great Ways to Stop Procrastinating and Get More Done in Less Time: Brian Tracy: 9781576754221: Amazon.com: Books   -  5 Ways to Give Yourself an Education That Kicks the Crap Out of the One You Got in School   -  How Seinfeld's Productivity Secret Fixed My Procrastination Problem   -  Start Every Day as a Producer, Not a Consumer   -  3 Words That Guarantee Failure | Inc.com   -  Make It Count - YouTube   -  40 Questions Everyone is Afraid to Ask   -  How Can I Recharge My Depleted Motivation?   -  Never, ever give up: Arthur's inspirational transformation. [VIDEO]   -  Why we procrastinate by Vik Nithy @ TEDxYouth@TheScotsCollege - YouTube   -  Problem loading page   -  15 Ways to Be Irresistibly Attractive   -  Teachers Quick Guide to BYOD ~ Educational Technology and Mobile Learning   -  The Science of Procrastination - And How To Manage It - YouTube