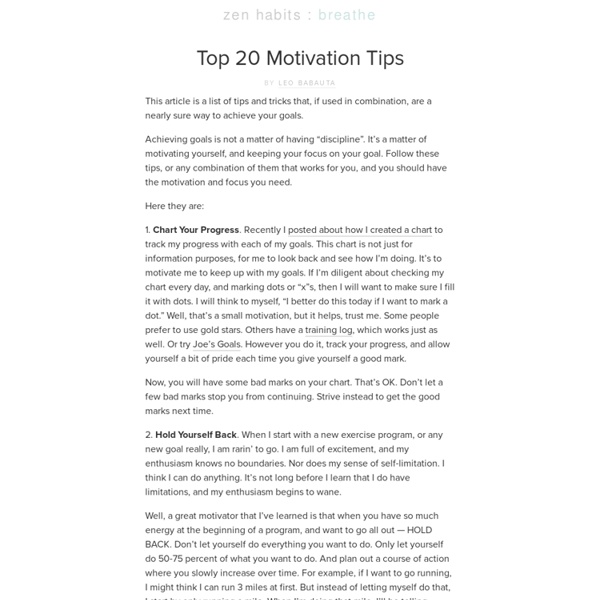 By Leo Babauta This article is a list of tips and tricks that, if used in combination, are a nearly sure way to achieve your goals. Achieving goals is not a matter of having “discipline”. It’s a matter of motivating yourself, and keeping your focus on your goal. Follow these tips, or any combination of them that works for you, and you should have the motivation and focus you need. Here they are: 1. Now, you will have some bad marks on your chart. 2. Well, a great motivator that I’ve learned is that when you have so much energy at the beginning of a program, and want to go all out — HOLD BACK. 3. Each time I joined a forum, it helped keep me on track. 4. Find a magazine photo or a picture online and post it somewhere where you can see it not only daily, but hourly if possible. 5. 6. I have a rule (not an original one) that I just have to put on my running shoes and close the door behind me. 7. 8. 9. 10. 11. 12. 13. 14. 15. 16. 17. 18. 19. 20. Related:  Procrastination/Motivation

How To Get Guaranteed Results and Why You Dont ShipBen's Blog Getting guaranteed results in just about anything can be very easy… Never hit “publish” on the blog post you’re unsure of. Never launch your start-up. Never finish writing a book. Never read another book after school. Never create anything. Never put 100% into anything. Never do anything without permission. Never take initiative. Never do anything that makes you uncomfortable. Never take full responsibility so you have an alibi. Never stop dreaming that your big break is around the corner when you haven’t taken a single step toward that goal today. Never have a goal. Never ship. The results are guaranteed – nothing. Most people prefer doing nothing. I had a open-ended temp job where I did data entry for 9 months! Why Don’t You Ship? This: I spent around one or two years writing a book. and Granted, there are only 2 negative reviews and 39 positive reviews on Amazon right now, but this is what stops people from shipping. It’s very likely that some people won’t enjoy your work. The alternative?

Jumpstart your day (the night before) – an evening routine | zen habits By Leo Babauta Not long ago, I talked about the importance of a morning routine … it’s a great way to incorporate your goals into each day, at the beginning of the day. This is a beautiful time of day, when all is quiet and the world sleeps. But there’s another part of the day that I love, and that can have great benefits for you at a cost of only 10-30 minutes each day: the time right before you go to sleep. If you’re following my advice on how to become an early riser (and if not, try it out!) Each person’s evening routine will be different, but here’s a sample routine that’s based on something I’ve been trying, with some good ideas that most people can use: pack lunch (for yourself and the kids)get your clothes (and other gear) readycheck your calendarplan your MITsreview your daywash any dishes, clean the counterspick up so that you’re greeted with a clean house in the morningset your alarmread yourself to sleep Create your evening routine today and get a jump start on tomorrow!

Eat the Love, Sweets for the Mouth and Mind Solve Tough Problems with a Brain Reboot This is a guest post from Scott H. Young. I’ve spent a lot of time looking into different methods for solving problems and boosting my creativity. I’ve come to the conclusion that meditation isn’t just for the monks. You can use meditation for finding solutions to difficult problems, taking control of your emotions or rebooting your brain. Im not big into the fancy mantras and religious overtones often associated with meditation. How to Meditate Meditation isn’t hard to do, but it does require practice. Get into a position where you don’t feel discomfort but aren’t completely relaxed. This entire process of getting into a meditative state only takes me about five to ten minutes. There are a number of ways you can use practical meditation: Solving Tough Problems One of my favorite ways to use meditation is to tackle tough problems. Once you get into a meditative state, try to form a visual scene inside your head. About Scott Young:

Procrastination News, Videos, Reviews and Gossip - Lifehacker In a monthly mentor call this afternoon, my coach said, "Press pause...longer." Last winter, Daniel Kraft ( ) was teaching at Singularity University. His comment to "dive deeper in to the problem" has stuck with me over the past few months. It seems that the three "issues" listed here - Boredom, Distraction, and Procrastination - might actually get in the way of this deep thinking: BOREDOM: a tendency to actually stew in how boring things are. DISTRACTION: sure, there's a pause, as I click the home button on my iPhone to launch another social media app. PROCRASTINATION: as any longevity thinker will tell you - Aubrey DeGrey is my go-to guy for this kind of mindset - we have a tendency to think "too much" will happen in the short term, and "not enough" will happen in the long term. Thorin, I sure appreciate you spending some time in collecting these studies and putting the comments around them.

3 Steps to a Permanently Clear Desk | zen habits By Leo Babauta Once upon a time, my desk was cluttered with all the things I was currently working on — not to mention dozens of things I wasn’t working on: notes, post-its, phone numbers, papers to be filed, stacks of stuff to work on later. I was too busy to organize it, and if I ever did get it cleared, it would pile up soon after. It’s a different story today. How did I make the transformation? Much of my current system (as opposed to stuff I’ve been trying along the way) is taken almost completely from “Getting Things Done,” by David Allen (via Lifehacker & 43 Folders). Here’s the system: 1. 2. 3. It’s that simple. Leaving stuff on top of your desk is procrastination (and as a procrastinator, I should know). What I’ve described is a good habit to learn, but it takes time to learn it.

Problems Teens With Asperger Syndrome Often Face Diane Kennedy, in her 2002 book The ADHD Autism Connection, writes that the years from twelve to seventeen are "the saddest and most difficult time" for people with Asperger Syndrome. This is not true of every teen with Asperger Syndrome. Some do extremely well. Yet, as Kennedy observes, Aspie teens typically become more isolated socially during a period when they crave friendships and inclusion more than ever. Meanwhile, school becomes more demanding in a period when they have to compete for college placements. Social Isolation.In the teenage world where everyone feels insecure, teens that appear different are voted off the island. Many Aspie teens are stiff and rule-oriented and act like little adults, which is a deadly trait in any teenage popularity contest. Inability to "Be a Teen." Some Aspies remain stuck in a grammar school clothes and hobbies such as unicorns and Legos, instead of moving into adolescent concerns like MySpace and dating. Sexual Issues. Criminal Activity.

101 Cookbooks - Healthy Recipe Journal Calm as a Monk: How Equanimity Can Save Your Sanity Post written by Leo Babauta . Follow me on Twitter . Reader Trina wrote in one of the comments: Leo, I admire the equanimity with which you deal with the more critical comments in your blog posts here and in other websites, especially the ones that begin with “You (or what you’re saying) is bogus/nonsense/idiotic” but whose arguments do not even prosper beyond the setting up of solid premises. For those who don’t know, “upeksa” or “equanimity” are basically one of the four “Sublime Attitudes” in Buddhism — also called “the Four Immeasurables,” or “the four sublime attitudes” (the others being loving-kindness, compassion, and sympathetic joy). Trina brings up a great point about my attitude towards comments on Zen Habits and elsewhere, and about my attitude towards everyday life. I can respond with similar negativity , and thereby increase the animosity between myself and the commenter, and the general community. How can you develop equanimity? Learn to meditate, even just a little .

20 Procrastination Hacks This post was written by Leo Babauta of ZenHabits.net I’m going to take a wild leap and suggest that procrastination is a problem that plagues even the best of us. Yes, even Scott Young must procrastinate once in awhile. I surely do. But even though I procrastinate, I find ways to get a lot done. This post, for example, was written as a means of putting off a more urgent article that I need to write by the end of today. Please note that I do not suggest that you do all of these — that’s an overwhelming task that would certainly be pushed back endlessly. Form a Do It Now habit. Bonus hack: Procrascipline. Read more posts by Leo Babauta at Zen Habits, including popular ones on Double Your Productivity, keeping your inbox empty, clearing your desk, becoming an early riser, and the Top 20 Motivation Hacks. This website is supported, in part, by affiliate arrangements (usually Amazon). Debate is fine, flaming is not.

Email Zen: Clear Out Your Inbox | zen habits Post written by Leo Babauta. I use Gmail exclusively for email, and it constitutes a major part of my two day jobs. I get a fair amount of email each hour, and I am pretty quick at responding. However, one thing you’ll notice about my Gmail inbox is that it is just about always empty. It gives me a Zen feeling to have a clean inbox, a feeling of peace and calm and satisfaction. But GTD changed that (as well as 43 Folders and others), and for nearly a year now, I’ve been fairly consistent about having a clean inbox. Here are my simple steps to achieving Email Zen: 1) Don’t check email first thing in the morning, or have it constantly on. 2) When you check your email, dispose of each one, one at a time, right away. 2a) Is it junk or some forwarded email? 2b) Is it a long email that you just need to read for information? 2c) If the email requires action, make a note of the action on your to-do or GTD lists to do later. 2d) If you can respond to it in a minute or two, do so immediately. Ahhh.