Start Every Day as a Producer, Not a Consumer 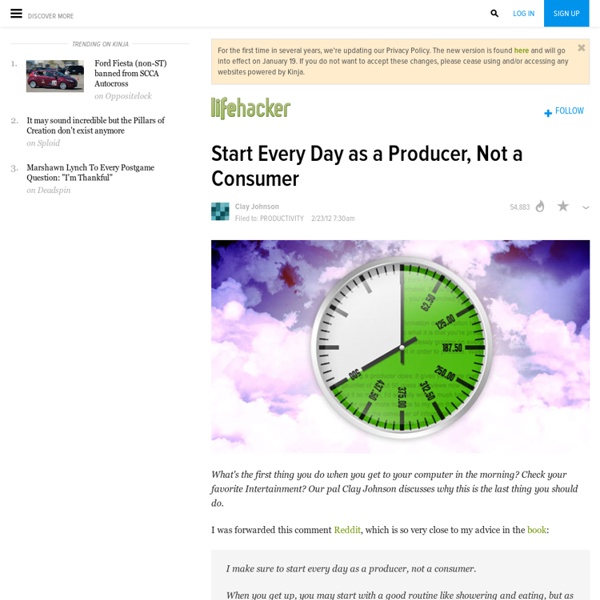 I have to agree that my most productive days are those where I don't allow myself to read the news, check e-mail, facebook, etc., right after I get up. However, that happens because I've got a ton of stuff to get done, and the outside world takes a back seat until my workload is under control. However, there are certain biological necessities that have to happen before I can be productive. The dog gets let out, I go to the bathroom, I eat/drink something, and *then* I sit down to be productive. I also *have* to check my e-mail, because if something blew up overnight or there's something that needs to be dealt with ASAP, I need to know as early as possible. I've found that reading my e-mail on my phone curbs the impulse to respond to everything immediately, because composing a lengthy e-mail on a tiny touchscreen sucks. Flagged

How to Overcome Procrastination Using Self Talk: 9 Steps Edit Article Edited by Luciano Passuello, Krystle, Sondra C, Garshepp and 20 others We talk to ourselves all the time in our minds. Even when we're not paying attention, these relentless mental debates deeply influence our feelings and, ultimately, our behaviours and actions..

7 Qualities of Uber-Productive People Some people get more done than others--a lot more. Sure, they work hard. And they work smart. But they possess other qualities that make a major impact on their performance. They do the work in spite of disapproval or ridicule. Work too hard, strive too hard, appear to be too ambitious, try to stand out from the crowd. Developing self discipline Time management series Self-discipline Self-discipline can be considered a type of selective training, creating new habits ofthought, action, and speech toward improving yourself and reaching goals. Self-discipline can also be task oriented and selective.View self-discipline as positive effort, rather than one of denial. Schedule a small task for a given time of the day; Practice deliberate delaying.

How to Send Back Food at a Restaurant Without Pissing Off Your Waiter I agree with this, picking a nice place makes all the difference. Anyway, in most places where I've eaten, waiters would actually come back a couple minutes later and ask if everything was to my taste. Sending back was never an option to me. There was this place I LOVED to eat because something that happened the first times I went to this restaurant: I've looked at the daily stuff and when the waiter asked me what I wanted, I actually told her I didn't really like some of the dishes and she told me what if there was something I'd like to eat that wasn't on the menu. I said I'd be happy with a pork steak, french fries, rice and lettuce. 500 Words before 8am 500 Words before 8am Feb 22, 2012 Clay Johnson I was forwarded this comment on Reddit, which is so very close to my advice in the book: I make sure to start every day as a producer, not a consumer. When you get up, you may start with a good routine like showering and eating, but as soon as you find yourself with some free time you probably get that urge to check Reddit, open that game you were playing, see what you’re missing on Facebook, etc. Put all of this off until “later”.

How the Pomodoro Technique Increases Productivity Picture yourself sitting at your desk at 8:30 am. You know you’ve got eight hours to get work done, which should be plenty of time. You also know that if you do finish these projects, you can look forward to an evening with friends, family or even a good book, free of worries about deadlines or angry bosses. Now think about how you feel at 4pm: Sure, maybe you’ve crossed a few things off your to-do list, but what about the rest of it?

How To be so Productive You Can't Stand it You might think that creatives as diverse as Internet entrepreneur Jack Dorsey, industrial design firm Studio 7.5, and bestselling Japanese novelist Haruki Murakami would have little in common. In fact, the tenets that guide how they – and exceptionally productive creatives across the board – make ideas happen are incredibly similar. Here are 10 laws of productivity we’ve consistently observed among serial idea executors: 1. Break the seal of hesitation.

Related:
Related:  Productivity   -  Do It Now - Hack away procrastination   -  Productivity   -  Personal development   -  Life Skills   -  Write Everyday   -  Everyday life   -  Everyday additives   -  DIY: CRAFTS OR EVERYDAY   -  Everyday knowledge   -  Cultural Studies & Analysis   -  Be lucky - it's an easy skill to learn   -  The Little Book of Procrastination Remedies : zenhabits   -  Get Off Your Butt: 16 Ways to Get Motivated When You’re in a Slump   -  Top 20 Motivation Tips   -  11 Ways to Cure Someday Syndrome : zenhabits   -  The Top 51 Time Wasters (Updated for 2015)   -  100+ Free Tools For You To Access Blocked Sites   -  Mind Your En And Em Dashes: Typographic Etiquette | Smashing Magazine   -  How To Motivate Yourself – Self Motivation | PickTheBrain | Motivation and Self Improvement   -  Obsessive- Compulsive’s Guide: Top 12 Organizing Tips, Plus Resources : zenhabits   -  25 Killer Actions to Boost Your Self-Confidence   -  Sign up for a free account   -  Eat That Frog!: 21 Great Ways to Stop Procrastinating and Get More Done in Less Time: Brian Tracy: 9781576754221: Amazon.com: Books   -  iPad Tips And Tricks | 100 Essential | TCGeeks   -  50 Free Apps We're Most Thankful For   -  Pretentious Title: How I Went From Writing 2,000 Words a Day to 10,000 Words a Day   -  Insync: A Google Docs-Loving Dropbox Rival   -  How To Organize Your Files - Organize With Sandy : Organize With Sandy   -  GuideGuide   -  Developing self discipline   -  Columbia University | Graduate School of Arts and Sciences   -  How Seinfeld's Productivity Secret Fixed My Procrastination Problem   -  Problem loading page   -  How To Create A Habit In 15 Days | Dragos Roua   -  Skitch - Snap. Mark up. Send.   -  Microsoft OneNote: Save Ideas and Organize Notes - Apps on Google Play   -  Customer Support Software & Ticketing System | Freshdesk   -  35 Great iPad Apps for Designers, Geeks and Creative Individuals - Creative CanCreative Can   -  Slice - Track Your Stuff (Packages, Purchases, Price Drops)   -  How to Use Text Expansion to Save Yourself Hours of Typing Every Week