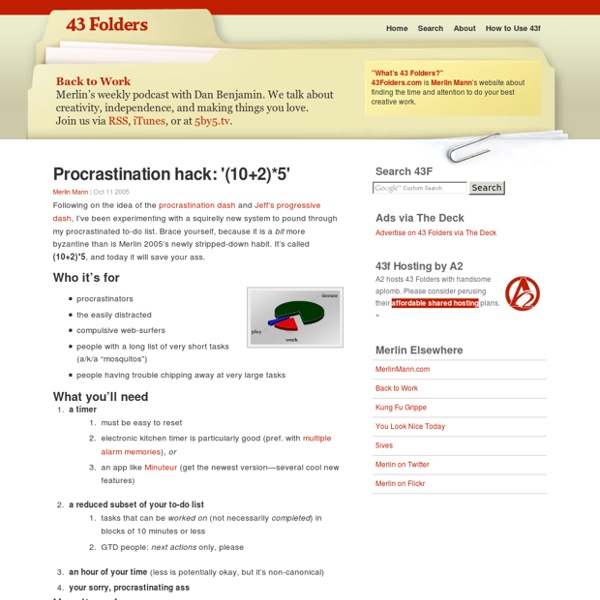 Following on the idea of the procrastination dash and Jeff’s progressive dash, I’ve been experimenting with a squirelly new system to pound through my procrastinated to-do list. Brace yourself, because it is a bit more byzantine than is Merlin 2005’s newly stripped-down habit. It’s called (10+2)*5, and today it will save your ass. Who it’s for procrastinatorsthe easily distractedcompulsive web-surferspeople with a long list of very short tasks (a/k/a “mosquitos”) people having trouble chipping away at very large tasks What you’ll need a timermust be easy to resetelectronic kitchen timer is particularly good (pref. with multiple alarm memories), oran app like Minuteur (get the newest version—several cool new features)a reduced subset of your to-do list tasks that can be worked on (not necessarily completed) in blocks of 10 minutes or lessGTD people: next actions only, pleasean hour of your time (less is potentially okay, but it’s non-canonical)your sorry, procrastinating ass How it works

Former Auschwitz Guard Oskar Groening Recounts Chilling Details Of Life In Camp LUENEBURG, Germany (AP) — A former SS sergeant described in chilling detail Wednesday how cattle cars full of Jews were brought to the Auschwitz death camp, the people stripped of their belongings and then most led directly into gas chambers. Oskar Groening is being tried on 300,000 counts of accessory to murder, related to a period between May and July 1944 when around 425,000 Jews from Hungary were brought to the Auschwitz-Birkenau complex in Nazi-occupied Poland and most immediately gassed to death. During that period, so many trains were arriving that often two would have to wait with closed doors as the first was "processed," Groening testified at the Lueneburg state court. Though he was more regularly assigned to the camp's Auschwitz I section, he said he guarded the Birkenau ramp three times, including one busy 24-hour shift. The main gas chambers were located at Birkenau.

40 of the Best To-Do Apps for Personal Task Management What was once the simple choice between using a notebook, legal pad, or stack of Post-it notes to manage your personal to-do list is now a mind-numbing decision between dozens of to-do apps. Flashy apps that offer more features than you could ever use. Free apps that are so bare you wonder how they'd be helpful at all. And paid apps that look just right, but you're not sure it's worth paying the price just to find out. Wonder no more.

Start Every Day as a Producer, Not a Consumer I have to agree that my most productive days are those where I don't allow myself to read the news, check e-mail, facebook, etc., right after I get up. However, that happens because I've got a ton of stuff to get done, and the outside world takes a back seat until my workload is under control. However, there are certain biological necessities that have to happen before I can be productive. The 10 O’Clock Rule This is a nifty one, simple to implement and, in my experience, surprisingly effective. Set your watch to beep every night at 10 o’clock. When your watch goes off, get up that instant and prepare for morning. Whether you’re in the middle of watching a DVD, rushing to meet a work deadline, reading that one last blog entry, etc., get up and get rolling. Your Morning Prep Checklist In addition to brushing up, walking the dog, and otherwise getting ready for bed as usual, do as many morning tasks as you can ahead of time: Plan breakfast and make sure the fridge is stocked (if necessary, run out to the grocery store to stock up on milk, eggs, etc.)

10 Ways To Make Your Small Space Seem Bigger Moving to a smaller space sometimes means saying goodbye to storage — but it doesn't have to. In the video above, Good Housekeeping looks at 10 storage and shelf solutions that will make even the smallest spaces seem bigger. From sneaky sofa tables to magic mirrors that double as a mini table, these pieces of furniture aren't just fashionable, they're functional too. Being able to style a small space is a special skill to have with micro-condos on the rise. The Secret Weapon For Better Focus Advertisement Are you looking for a more efficient way to organise your work-days? Try Time Blocking. A few months back, I came across Cal Newport’s illuminating post on Time Blocking — a productivity “hack” that helps you to make the most of your work day by assigning very specific tasks to very specific blocks of time.

How To Rest Your Mind. ~ Rose Taylor Goldfield Indian teachers of yoga say that the Corpse Pose is the hardest yoga pose for Westerners. In Corpse Pose, we lie on the floor and surrender to the earth, leaving the body in perfect rest and stillness as though dead. But many of us have problems even with the pose of complete rest.

Do you really need more time? The single biggest “push back” I get from people when I share about how building practices into their life can unleash new ideas and help them be more productive goes something like this: “Yeah, that’s great, but I really just don’t have the time.” After collecting myself, I reply…Did you at any point in the last week: Watch TV?

Related:
Related:  ORGANIZING 1   -  time management   -  Organizing   -  Organizing   -  Labour Organizing   -  ORGANIZING   -  Organizing   -  Organizing events   -  I Heart Organizing - F/T   -  IHeart Organizing   -  Get Off Your Butt: 16 Ways to Get Motivated When You’re in a Slump   -  Top 20 Motivation Tips   -  11 Ways to Cure Someday Syndrome : zenhabits   -  Overview   -  Highlight web with Marker.to - best marker, highlighter, annotator!   -  The Top 51 Time Wasters (Updated for 2015)   -  How to Get Your Stuff into Evernote | Michael Hyatt   -  How To Motivate Yourself – Self Motivation | PickTheBrain | Motivation and Self Improvement   -  Pattern recognition - Wikipedia, the free encyclopedia   -  Eat That Frog!: 21 Great Ways to Stop Procrastinating and Get More Done in Less Time: Brian Tracy: 9781576754221: Amazon.com: Books   -  Mystery Cube   -  The Power of Habit: Why We Do What We Do in Life and Business: Charles Duhigg: 3520700000553: Amazon.com: Books   -  How Seinfeld's Productivity Secret Fixed My Procrastination Problem   -  Start Every Day as a Producer, Not a Consumer   -  The Organised Housewife : Ideas for organising, decluttering and cleaning your home   -  Study Smarter, Not Harder | Psychology Today   -  Video censurado varias veces - ENERGIA GRATIS.flv - YouTube   -  Cool Sound and Water Experiment! - YouTube   -  How Can I Recharge My Depleted Motivation?   -  How to Build a Rotating Canned Food Shelf: 14 Steps   -  PBJstories: Kitchen Pantry Reveal !   -  Understanding Why Pornography Addiction is a Brain Disease   -  Museum of Perpetual Motion Machines - Visual Education Project   -  Why we procrastinate by Vik Nithy @ TEDxYouth@TheScotsCollege - YouTube   -  Problem loading page   -  Account Suspended   -  52 Totally Feasible Ways To Organize Your Entire Home