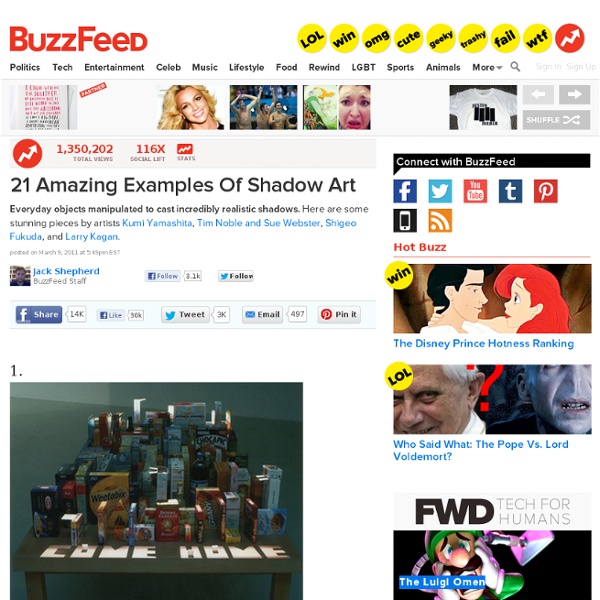 Citi Culinary Beats: Toronto Meets L.A. When Celeb Chef and Quirky Band Get Together! "I got some freakin' pipes, I just haven't gotten my record deal yet!" So says gregarious celeb chef Eric Greenspan, who's based in Los Angeles and serves up his versions of classic dishes at the Roof on Wilshire. On a more serious note, he explains his reasoning for going into the culinary arts. "I didn't always know I wanted to be a chef," he says. "I always knew I wanted to be my own boss.

Carlos Meira's paper sculptures Born in Rio de Janeiro, Carlos Meira’s artistic endeavour began when he joined the printmaking course at the School of Fine Arts at Federal University of Rio de Janeiro. In early 1990, Carlos moved to Portugal where he developed his unique style of paper sculpture. He returned to Brazil in 1996 and settled in Florianopolis where he further strengthened his illustration side. He has held six solo exhibitions and illustrated several books since then. Carlos Meira has now devoted himself to illustration and paper sculpture having worked as an artist, designer and art director within the advertising industry.

Paper Art - 100 Extraordinary Examples of Paper Art Paper art can be traced back to Japan, where it originated over a thousand years ago. From complex paper cutting to book carving, this is an ever expanding area of design that is hardly talked about. These intricate paper designs grace museums and exauhibitions throughout the world and is becoming yet another exciting medium of expression for many designers. Some of the artists featured here use simple materials, such as A4 printing papeel, while others resort to unexpected materials, such as actual books, as their prime materials. Toilet Paper Roll Faces: The Creepiest Use Of A Toilet Paper Roll Ever Everyone knows that when the toilet paper is out, danger is approaching. Well, let’s just say that we all know we would rather have a spare toilet paper roll at home than realize it’s out when it’s too late. I remember when I was in preschool, and we were asked to bring empty toilet paper rolls to school. At first I was, as most of the kids were, clueless as to what was going to happen. But then it quickly dawned on us that we were going to create all kinds of cool stuff with these cardboard things.

88 Brilliant Examples of Forced Perspective Photography Forced perspective is a technique that employs optical illusion to make an object appear farther away, closer, larger or smaller than it actually is. It is used primarily in photography, filmmaking and architecture. It manipulates human visual perception through the use of scaled objects and the correlation between them and the vantage point of the spectator or camera. A Gallery of Movies as Neon Signs The internet will apparently never run out of cool movie-themed art projects, and until it does, I’ll still have a job. Today’s entry comes from Mr. Whaite, who likes to put a bit of motion in his art using the animated GIF as his format of choice.

Street art in Poland Art & Design Usually artists work alone, but sometimes a collaboration works out well. A good example is the street artists Chazme, Lump and Sepe. They worked together to make the streets of Poland look better. Share Choi Xooang (click images for detail) All at once delicate and nightmarish these painted polymer clay figures by Seoul-based artist Choi Xooang are nothing short of remarkable. Try as I might it’s hard to find a definitive, trustworthy article to source information from, and even the spelling of his name seems to change from site to site. However it seems generally accepted that Xooang is attempting to draw attention to human rights abuses in Korea, and seeing these somewhat macabre, stunted figures unable to see or speak, it’s hard to dispute that. You can see much more of his work at Mu Um and Slash, though be warned it’s somewhat graphic (generally nudity).

Guido Van Helten New Mural - Westman Islands, Iceland While we last heard from him in Reykjavik, Guido Van Helten has now reached the Westman Islands, a small island south of iceland, where he worked his magic on this fantastic new piece. This piece is the first part of a series of walls painted in the harbour of Heimaey, Vestmannaeyjar. This small community is the site of the Volcanic Eruptions here in 1973 in which the town and community was nearly abandoned. This painting is based on the image of island local Halla Svavarsdottír sowing new vegetation on the mountain Heimakletti after the eruption in 1976. The image was referenced from local photography archive Sigurgeir ljósmyndari by Sigurgeiri Jónasson.

Sagaki Keita (click images for detail) Artist Sagaki Keita was born in 1984 and lives and works in Tokyo. His densely composited pen and ink illustrations contain thousands of whimsical characters that are drawn almost completely improvised. EVOL's Rural City EVOL's amazing building stencils in the unlikeliest of places. This was done as part of MS Dockville. For more of his work in this series, check out the Dresden warehouse. artist: EVOLlocation: Hamburg, Germany