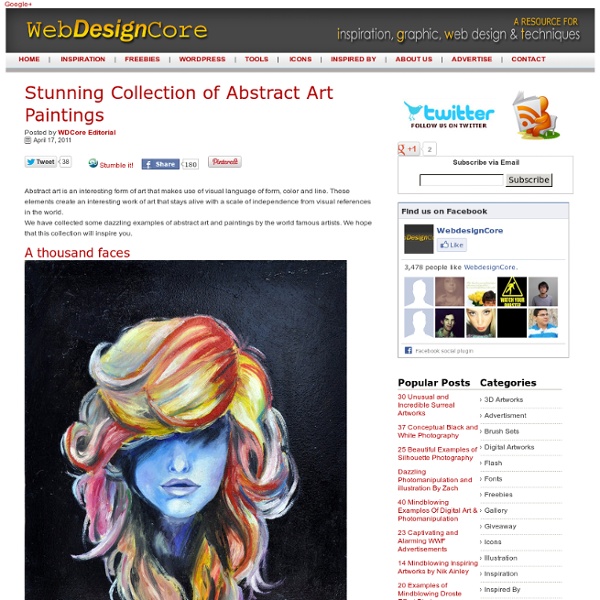 About Ars Electronica What is Ars Electronica? Art, technology, society. Since 1979, Ars Electronica has sought out interlinkages and congruities, causes and effects. James Tan - Chinese Brush Painting - Chinese Paintings James Tan Biography At the turn of the century, several revolutionary-minded young Chinese artists attempted to create a "New National Painting" style reflecting the impending cultural and political changes. From other cultures, they brought innovative ideas, new subjects, and techniques such as fixed perspective, shading light effects and strong unconventional colors. They then added their own creative energy, bringing a new richness and depth to the traditional art forms. This was the beginning of the Lingnan style of painting --- the style of James Tan. * ARID * Articles: 2005/10/10: 12-Step Assumptions and Fallacies * ARID * Monday, October 10, 2005 - dr.bomb The core of Alcoholics Anonymous is its program known as the Twelve Steps. This is the original version from the original manuscript as published in multilithed book form in 1938(1): Admitted we were powerless over alcohol - that our lives had become unmanageable. Came to believe that a Power greater than ourselves could restore us to sanity. Made a decision to turn our will and our lives over to the care and direction of God as we understood Him.

Joan Mitchell Biography, Art, and Analysis of Paintings by TheArtStory "Abstract is not a style. I simply want to make a surface work. This is just a use of space and form: it's an ambivalence of forms and space." Joan Mitchell is known for the compositional rhythms, bold coloration, and sweeping gestural brushstrokes of her large and often multi-paneled paintings. Ranes Report December 26, 2009 E.M. Jellinek's departure from Budapest in 1920, part one by Ron Roizen Jellinek as pictured in a 1943 Collier's article on the then-newYale Summer School of Alcohol Studies Part 2 of this post available here. Széchenyi thermal bath The Széchenyi Medicinal Bath in Budapest (IPA: [seːtʃeːɲi], Hungarian: Széchenyi-gyógyfürdő) is the largest medicinal bath in Europe. Its water is supplied by two thermal springs, their temperature is 74 °C (165 °F) and 77 °C (171 °F), respectively. Components of the thermal water include sulphate, calcium, magnesium, bicarbonate and a significant amount of fluoride acid and metaboric acid. Medical indications are on degenerative joint illnesses, chronic and sub-acute joint inflammations, as well as orthopaedic and traumatological post-treatments.[1] History[edit] Main swimming and thermal sections are possible to visit mixed.

Best Quotes of All Time It’s been three years since we shared our original list of some of the best quotes of all time, and we felt it was a good time for an update. We’ve added another 25 quotes for you. But these aren’t just any quotes. These are quotes designed to inspire. Will You Marry Me? It’s not a get-down-on-one-knee-in-public proposition, but I think it still counts as a public proposition, no? Out there for all the world to see, open to well wishes and ridicule and all? Regardless of unconventional format, though, I’m genuinely asking: will you? Heavens (World Treasures of the Library of Congress: Beginnings) Views of the Universe The Emperor's Astronomy The "Emperor's Astronomy"(dedicated to the Holy Roman Emperor Charles V) elegantly depicts the cosmos and heavens according to the 1400-year-old Ptolemaic system, which maintained that the sun revolved around the earth. By means of hand-colored maps and moveable paper parts (volvelles), Petrus Apianus (1495-1552) laid out the mechanics of a universe that was earth- and human-centered. Within three years of Apianus's book, this view was challenged by Copernicus's assertion that the earth revolved around the sun, making this elaborate publication outdated.

Ching Shih Ching Shih Ching Shih (1775–1844)[1] (simplified Chinese: 郑氏; traditional Chinese: 鄭氏; pinyin: Zhèng Shì; Cantonese: Jihng Sih; "widow of Zheng"), also known as Cheng I Sao (simplified Chinese: 郑一嫂; traditional Chinese: 鄭一嫂; pinyin: Zhèng Yī Sǎo; Cantonese: Jihng Yāt Sóu; "wife of Zheng Yi"), was a prominent pirate in middle Qing China, who terrorized the China Sea in the early 19th century. She commanded over 300 junks manned by 20,000 to 40,000 pirates[2] another estimate has Cheng's fleet at 1800 and crew at about 80,000[3][4]— men, women, and even children. She challenged the empires of the time, such as the British, Portuguese and the Qing dynasty. Undefeated, she would become one of China and Asia's strongest pirates, and one of world history's most powerful pirates. She was also one of the few pirate captains to retire from piracy.

Underwater Photos That Mimic the Look of Baroque Paintings Hawaii-based photographer Christy Lee Rogers specializes in creating dreamlike photos of people underwater. Her project Reckless Unbound shows people swirling around one another while wearing colorful outfits. The photos are reminiscent of the paintings of old Baroque masters, who would often paint people floating around in heavenly realms. Rogers creates her photos in swimming pools at night. The scenes are illuminated with bright off-camera lights, and the shoots often last two to four hours each. GUP Magazine writes,

British have invaded nine out of ten countries - so look out Luxembourg The analysis is contained in a new book, All the Countries We've Ever Invaded: And the Few We Never Got Round To. Stuart Laycock, the author, has worked his way around the globe, through each country alphabetically, researching its history to establish whether, at any point, they have experienced an incursion by Britain. Only a comparatively small proportion of the total in Mr Laycock's list of invaded states actually formed an official part of the empire. The remainder have been included because the British were found to have achieved some sort of military presence in the territory – however transitory – either through force, the threat of force, negotiation or payment. Why Don't You Try This?: Scientists Use Sound Waves To Levitate, Manipulate Matter A team of researchers in Switzerland have developed a way of levitating and transporting small objects using nothing but sound. Using ultrasonic waves – that is, sound waves whose frequency is too high for humans to hear – scientists at the Swiss Federal Institute of Technology in Zurich have made water droplets, instant coffee crystals, styrofoam flakes, and a toothpick, among other objects, hang in midair, move along a plane, and interact with each other. It is the first time that scientists have been able to use sound to simultaneously levitate several objects next to each other and move them around.