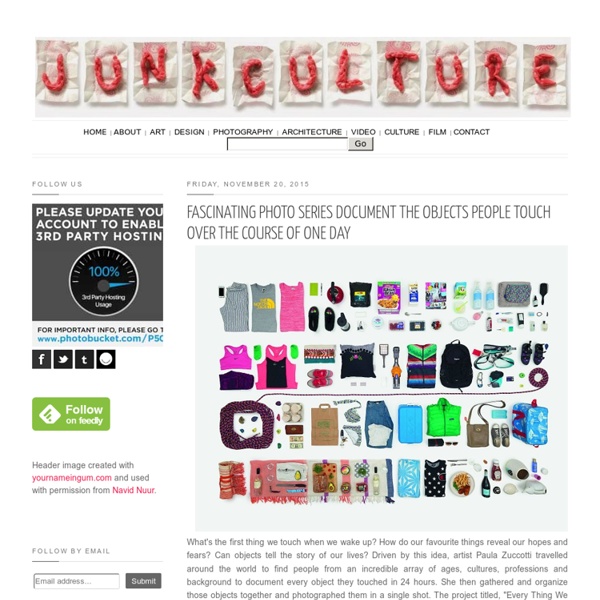 French artist Abraham Poincheval has taken residence inside a hollowed out bear's body as part of an art performance piece titled "Dans La Peau de l'Ours" (Inside the Skin of the Bear) at the Musée de la Chasse et de la Nature (Hunting and Wildlife Museum) in Paris. During the performance piece which ends April 13, Poincheval, equipped with water, food rations, and a lamp, will eat, sleep, and go to the bathroom inside the empty bear while being filmed by two cameras. “This transcendence between man and bears endures since the dawn of time,” Poincheval explains, “A profound symbolism has existed since prehistory, a symbolism that is still gripping the Western world’s imagination today.”

Quipsologies • Quipsologies, is a division of UnderConsideration, chronicling the most curious, creative, and notable projects, stories, and events of the graphic design industry on a daily basis. • Quipsologies uses TypeKit to render P22 Underground, Skolar Web by TypeTogether, and Coquette by Mark Simonson. • Quipsologies is run with Six Apart’s MovableType 6.3.2 • Syndicate / RSS Feed • All comments, ideas and thoughts on Quipsologies are property of their authors; reproduction without the author’s or Quipsologies’s permission is strictly prohibited

Art Inconnu - Little-known and under-appreciated art.: March 2010 "Portrait of Karola Neher" 1929 "Karola Neher was a well-known actress in Germany during the inter-war period and played Polly Peachum in the 1931 film adaptation of the theatrical hit The Threepenny Opera by Kurt Weill and Berthold Brecht. Neher was also Brecht’s mistress for a time. blog - upon a fold wheel of life... January 15, 2014 Something very beautiful I just watched and wanted to share. It’s a film by André Gidoin & The Makerie Studio. All filmed in camera, the horses on the carousel are spaced to spin in sync with the camera’s frame rate, creating the illusion of motion. Each one is carefully studied to follow the one before it, so that once animated they appear to be galloping.

Art - Sweet Station Paul Kaptein ” My work is broadly concerned with the agency of the present moment. By sampling various cultural and temporal trajectories, I’m exploring the notion of the now as a remix of past and future potentialities. This facilitates a renegotiation of perceptual truths resulting in an expression of things not quite truth, yet not quite fiction. Central to this is the underlying theory of emptiness (sunyata). Wonderland by Kirsty Mitchell: heart-breakingly beautiful photographic series in memory of an extraordinary life Kirsty Mitchell's Wonderland series has been three years in the makingAll costumes, wigs and sets were constructed on a shoestring budgetSome images took up to five months to createShe would often wait an entire year to find the perfect natural setting for her shots By Stephanie Hirschmiller Published: 14:11 GMT, 17 May 2012 | Updated: 09:34 GMT, 18 May 2012 Kirsty Mitchell's late mother Maureen was an English teacher who spent her life inspiring generations of children with imaginative stories and plays.

Hi-Fructose Magazine In his portrait series, the Austrian artist Aldo Tolino deconstructs, folds, reassembles and weaves printed photographs in order to create origami-like sculptural pieces. Tolino then re-photographs the works, converting the pieces back into two-dimensional objects. The disturbing quality of the images may not just be due to the fact that the folded faces appear distorted, disproportional and almost entirely stripped of identity. 84 pictures of dead malls Aug 23, 2012 For those of a certain age, the mall used to be the vibrant hub of retail. Quite literally you could get everything under one roof. But with one in five malls failing, it may herald the end of the mall. Especially if these pictures are anything to go by. Across the country, malls are falling into disrepair.

madame hervé : behind the curtains 2013 was a good year, not superbe, but really ok. I'm looking forward to 2014 and I'm sure it's much better than this last year. We have big plans for 2014, I will tell you more when the time is right! Have a wonderful rest of the year and a perfect start 2014!