THE SECRET LIVES OF NUMBERS 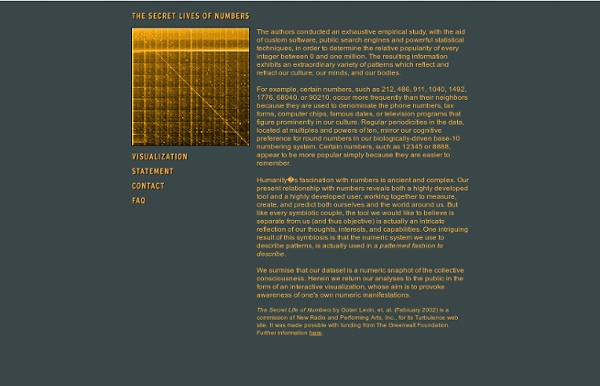 The authors conducted an exhaustive empirical study, with the aid of custom software, public search engines and powerful statistical techniques, in order to determine the relative popularity of every integer between 0 and one million. The resulting information exhibits an extraordinary variety of patterns which reflect and refract our culture, our minds, and our bodies. For example, certain numbers, such as 212, 486, 911, 1040, 1492, 1776, 68040, or 90210, occur more frequently than their neighbors because they are used to denominate the phone numbers, tax forms, computer chips, famous dates, or television programs that figure prominently in our culture. Regular periodicities in the data, located at multiples and powers of ten, mirror our cognitive preference for round numbers in our biologically-driven base-10 numbering system. Certain numbers, such as 12345 or 8888, appear to be more popular simply because they are easier to remember.

Figures for "Impossible fractals" Figures for "Impossible fractals" Cameron Browne Figure 1. Figure 2. Figure 3. Figure 4. Figure 5. Figure 6. Figure 7. Figure 8. Figure 9. Figure 10. Figure 11. Figure 12. Figure 13. 45° Pythagorean tree, balanced 30° Pythagorean tree and extended tri-bar. Figure 14. Figure 15. Figure 16. Crimes Against Humanity Having been conditioned your entire lives, the way we are all conditioned our entire lives, to receive sound-bite answers to questions we have never had the critical ability to form in our minds, forecloses our ability to interrogate reality and draw conclusions from it. That is the function of the media. That is the function of the educational system you understand. It's not to teach you to think critically, which is educational in value. It's to teach you what to think. That's indoctrination. That's a rather different thing, to be indoctrinated than to be educated. We've got an ignorant leadership. At Nuremberg it was said that there was a complicity on the part of the German citizenry. [You] do what's necessary. You are not going to morally persuade a criminal state structure, bent upon perpetrating genocide, war crimes, and crimes against humanity, to do the right thing.