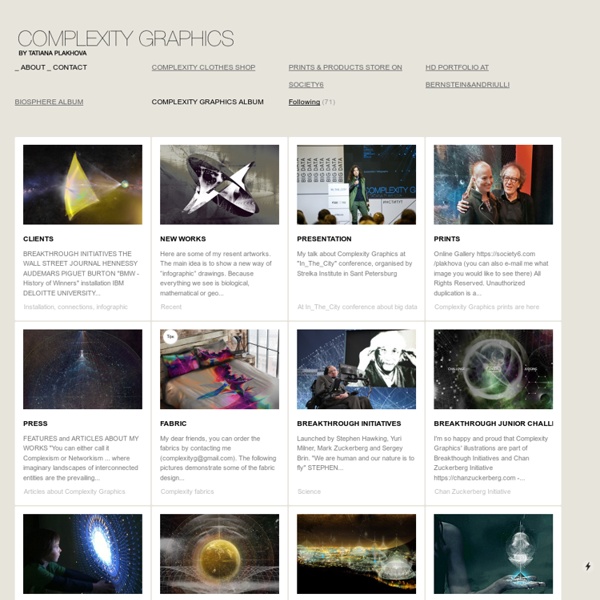 Journey into a Magical World | smashingpicture.com House at source Low cost airlines Little House on the Prairie Polish bonsai Tide Chess on island Dragon’s pleasure Erosion Hesia 2 Homestead The road The spring labyrinth The winter wave Painter’s Kitchen Wegener’s theory Four seasons The summer Brontosaurus civitas Carnival fights fasten Tectonic The city is landing Aquarium The Epitaphy The mystery garden The landscape cutter We’ve posted here works already created by Jacek Yerka. Do not forget to visit Yerka’s website here. ↑ Back to top Fractal Figure 1a. The Mandelbrot set illustrates self-similarity. As the image is enlarged, the same pattern re-appears so that it is virtually impossible to determine the scale being examined. Figure 1b. Figure 1c. Figure 1d. Fractals are distinguished from regular geometric figures by their fractal dimensional scaling. As mathematical equations, fractals are usually nowhere differentiable.[2][5][8] An infinite fractal curve can be conceived of as winding through space differently from an ordinary line, still being a 1-dimensional line yet having a fractal dimension indicating it also resembles a surface.[7]:48[2]:15 There is some disagreement amongst authorities about how the concept of a fractal should be formally defined. Introduction[edit] The word "fractal" often has different connotations for laypeople than mathematicians, where the layperson is more likely to be familiar with fractal art than a mathematical conception. History[edit] Figure 2. Figure 3. uniform mass center triangle fractal

8 Drawing Exercises That Every Artist Should Practice | today in art Wire Drawing Exercise Example from save-janos.net – this example has been placed on a painted acrylic background With this exercise you are not going to be drawing at all. All you need is some wire and a pair of pliers with cutters. My favorite wire for this exercise is tie wire and you can get it almost any hardware store. The idea is to explore shapes and lines that you create by bending the wire. Non-dominant Hand Give your non-dominant hand a chance to shine. Draw Vertically you should be doing most of these drawing exercises vertically if you have an easel or drawing horse. Continuous Contour Line Drawing Examples from Draw and Paint Online A Continuous Contour Line Drawing is an exercise to help us focus on the line. Continuous Blind Contour Line Drawing Example from Anne Leuck Feldhaus If you enjoy the contour line exercise, then you should certainly try this one. Gesture Drawing Draw the Negative Space Value Drawing Exercise <A HREF="

The human microbiome: Me, myself, us WHAT’S a man? Or, indeed, a woman? Biologically, the answer might seem obvious. A healthy adult human harbours some 100 trillion bacteria in his gut alone. And it really is a system, for evolution has aligned the interests of host and bugs. That bacteria can cause disease is no revelation. A bug’s life One way to think of the microbiome is as an additional human organ, albeit a rather peculiar one. The microbiome, too, is organised. Specialised; but not monotonous. That detail is significant. This early nutritional role, moreover, is magnified throughout life. The fat of the land This role in nutrition points to one way in which an off-kilter microbiome can affect its host: what feeds a body can also overfeed or underfeed it. Experiments on mice suggest this is not just a question of the bacteria responding to altered circumstances. Having shown that gut bacteria are involved in obesity, Dr Gordon wondered if the converse was true. The diabetes in question is known as type-2.

Brilliant photography from Natgeo archives | Pokkisam blog National Geographic is the source for photos, free desktop wallpapers of places, animals, nature, underwater, travel, and more.It's a long time inspiration for me but now only the time helps me to bring these awesome photographs for your display.I am very happy to bring those "brilliant photography from national geographic archives" here.The following 60 beautiful photographs has beautiful wild life,nature,people and bird photos. All the credit goes to Nationalgeographic and all the photographers :) About the author

Think Complexity by Allen B. Downey Buy this book from Amazon.com. Download this book in PDF. Read this book online. Description This book is about complexity science, data structures and algorithms, intermediate programming in Python, and the philosophy of science: Data structures and algorithms: A data structure is a collection that contains data elements organized in a way that supports particular operations. This book focuses on discrete models, which include graphs, cellular automata, and agent-based models. Complexity science is an interdisciplinary field---at the intersection of mathematics, computer science and physics---that focuses on these kinds of models. Free books! This book is under the Creative Commons Attribution-NonCommercial 3.0 Unported License, which means that you are free to copy, distribute, and modify it, as long as you attribute the work and don't use it for commercial purposes. Download the LaTeX source code (with figures and a Makefile) in a zip file.

t o d d b o t . c o m - the comics and music of adrian todd webb please write and let me know what you thought of this book! if you enjoyed reading The Goldfish and Bob, click the button below to donate - your support makes it possible for me to continue drawing, and also goes towards the printing costs of new books! Or consider buying a copy for yourself or someone you loveBUY THE GOLDFISH & BOB NOW! PDF FOR $2 or IN PRINT FOR $10 Intelligent Complex Adaptive Systems I don’t believe in the existence of a complex systems theory as such and, so far, I’m still referring to complex systems science (CSS) in order to describe my research endeavours. In my view, the latter is constituted, up until now, by a bundle of loosely connected methods and theories aiming to observe— from contrasted standpoints—these fascinating objects of research called complex adaptive systems. Nearly 40 years after Von Bertalanffy’s General System Theory (1968) and Jacques Monod’s Chance and Necessity (1971), it is fair to look back and to try to assess how much remains to be said about these complex adaptive systems. After all, Prigogine’s Order out of Chaos (1984) already demonstrated that future wasn’t entirely predictable in a history- contingent world. The universe is a massive system of systems -- for example, ecological systems, social systems, commodity and stock markets.

Flash, Design, Vector, Photoshop, Graphic Inspiration, Adobe Tutorials | GraphicMania.net Complex systems made simple Albert-László Barabási and Yang-Yu Liu, together with their collaborator Jean-Jacques Slotine at M.I.T., have developed a method for observing large, complex systems. In the image above, red dots represent sensor nodes, which are required to reconstruct the entire internal state of one such system. Image by Mauro Martino. Just as the name implies, com­plex sys­tems are dif­fi­cult to tease apart. But that may not matter any­more. The approach takes advan­tage of the inter­de­pen­dent nature of com­plexity to devise a method for observing sys­tems that are oth­er­wise beyond quan­ti­ta­tive scrutiny. “Con­nect­ed­ness is the essence of com­plex sys­tems,” said Albert-​​László Barabási, one of the paper’s authors and a Dis­tin­guished Pro­fessor of Physics with joint appoint­ments in biology and the Col­lege of Com­puter and Infor­ma­tion Sci­ence. Using their novel approach, the researchers first iden­tify all the math­e­mat­ical equa­tions that describe the system’s dynamics.