Log-based Change Data Capture — lessons learnt. Schema-on-what? How to model JSON. It seems hard to believe, but all year, around the world, I continue to have this conversation on whether or not we still need data modeling. 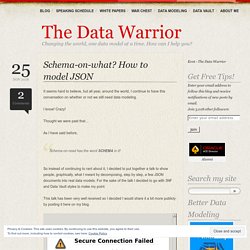 I know! Crazy! Thought we were past that… As I have said before, Schema-on-read has the word SCHEMA in it! So instead of continuing to rant about it, I decided to put together a talk to show people, graphically, what I meant by decomposing, step by step, a few JSON documents into real data models. The 9 Coaching Roles. 5 Reasons You Suck at BI Dashboard Design. While creating slides for an upcoming keynote on visual data storytelling I had a revelation! 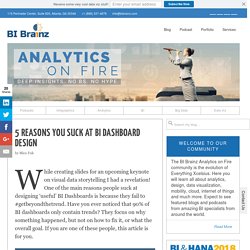 One of the main reasons people suck at designing ‘useful’ BI Dashboards is because they fail to #getbeyondthetrend. Have you ever noticed that 90% of BI dashboards only contain trends? They focus on why something happened, but not on how to fix it, or what the overall goal. If you are one of these people, this article is for you. Nine years, 8,000+ students, and 600+ enterprise dashboards later, I’ve concluded that the obsession most people have with trends is feeding two things.

It’s 2018, let’s please commit to #getbeyondthetrend! Below I’ll show you some quick, practical solutions to overcome this and other known inhibitors while designing useful BI dashboards. 1. Power BI and SAP – What Works and What Doesn’t – business intelligist. I run many workshops focused on integration of Microsoft Analytics and SAP. 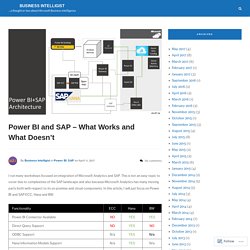 This is not an easy topic to cover due to complexities of the SAP landscape and also because Microsoft Analytics has many moving parts both with respect to its on premise and cloud components. In this article, I will just focus on Power BI and SAP ECC, Hana and BW. * – the word on the street is that these NOs are expected to become YES soon The following is a list of random points that are good to know as you implement a Power BI solution against SAP, in no particular order:

Hahne kurze BIS 01 12. Why the NoSQL Movement Should Have Been Called the JSON Movement. By Andy Palmer, Co-founder and CEO of Tamr. 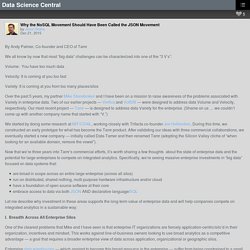 SQL vs NoSQL: The Differences. SQL (Structured Query Language) databases have been a primary data storage mechanism for more than four decades. 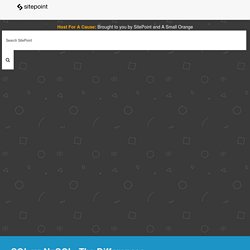 Usage exploded in the late 1990s with the rise of web applications and open-source options such as MySQL, PostgreSQL and SQLite. NoSQL databases have existed since the 1960s, but have been recently gaining traction with popular options such as MongoDB, CouchDB, Redis and Apache Cassandra. You’ll find many tutorials explaining how to use a particular flavor of SQL or NoSQL, but few discuss why you should choose one in preference to the other. I hope to fill that gap. In this article, we’ll cover the fundamental differences. Most examples apply to the popular MySQL SQL and MongoDB NoSQL database systems. The SQL vs NoSQL Holy War Before we go further, let’s dispel a number of myths … How "Good" is Your Data Model?: Validating a Database Design to Pass the Test of Time - Safari Blog. By Steve Hoberman Steve Hoberman is the author of the recently released “Data Model Scorecard: Applying the Industry Standard on Data Model Quality” which is published by Technics Publications. 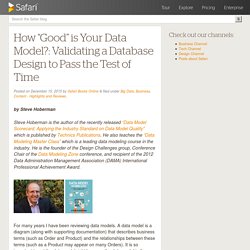 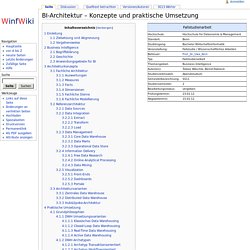 Did you Buy a Self-Service BI Fantasy? As I gaze outside my quiet home office window watching an alligator in the pond, I am reminded of my mostly isolated virtual reality. 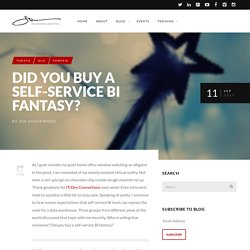 Not even a rare splurge on chocolate chip cookie dough cheered me up. Thank goodness for IT/Dev Connections next week! Even introverts need to socialize a little bit to stay sane. Speaking of sanity, I continue to hear insane expectations that self-service BI tools can replace the need for a data warehouse. Three groups from different areas of the world discussed that topic with me recently. “I like nonsense, it wakes up brain cells. Testing.

Microservices. "Microservices" - yet another new term on the crowded streets of software architecture. 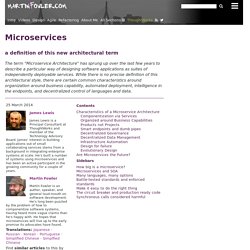 Although our natural inclination is to pass such things by with a contemptuous glance, this bit of terminology describes a style of software systems that we are finding more and more appealing. We've seen many projects use this style in the last few years, and results so far have been positive, so much so that for many of our colleagues this is becoming the default style for building enterprise applications.

Sadly, however, there's not much information that outlines what the microservice style is and how to do it. In short, the microservice architectural style [1] is an approach to developing a single application as a suite of small services, each running in its own process and communicating with lightweight mechanisms, often an HTTP resource API. These services are built around business capabilities and independently deployable by fully automated deployment machinery.