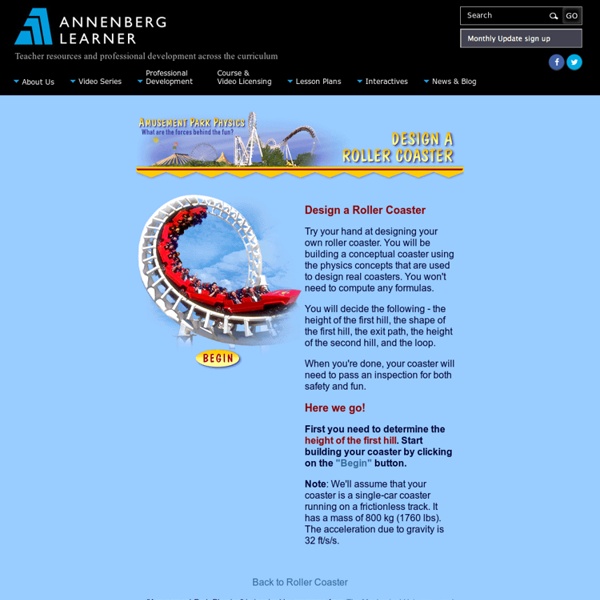 Amusement Park Physics You've bought your ticket and boarded the roller coaster. Now you're barreling down the track at 60 miles per hour, taking hairpin turns and completing death-defying loops. Your heart is in your throat and your stomach is somewhere near your shoes. Robots to revolutionize farming, ease labor woes SALINAS, Calif. (AP) — On a windy morning in California's Salinas Valley, a tractor pulled a wheeled, metal contraption over rows of budding iceberg lettuce plants. Engineers from Silicon Valley tinkered with the software on a laptop to ensure the machine was eliminating the right leafy buds. The engineers were testing the Lettuce Bot, a machine that can "thin" a field of lettuce in the time it takes about 20 workers to do the job by hand.

Forms of Energy: Motion, Heat, Light, Sound What forms of energy is Raul using to move his LEGO car? When he was a teenager in Romania, Raul Oaida became obsessed with building things: a jet-engine bike, a tiny spaceship, a LEGO car that runs on air. Why? Well, why not? You can see more cool stories about energy at The Adaptors website. Like video and audio? The seven forms of energy Learning outcomes Students will: understand and recognize the seven forms of energy through the completion of several card-sorting activities that require them to record and discuss their reasoning and through analysis of other groups’ sorting decisions. demonstrate their understanding of the seven forms of energy by sorting the cards (types of energy) into the proper groups and completing a fill-in-the-blank paragraph assessment. Teacher planning Time required

Friction Boards Friction is a force that both resists motion and makes movement possible. Friction is the resisting force when two materials slide across each other. The types of materials affect the amount of frictional force. Putting the Ice in Hockey Anders Elkjaer Johansen, Face off in the NHL game between the Vancouver Canucks and the Edmonton Oilers at GM Place, Vancouver, British Columbia, Canada. CC-BY-2.0 via Wikimedia Commons Purpose To understand the relationship between molecular motion and the slippery properties of ice. Context This lesson helps to demonstrate the application of the concept that different states of matter exhibit differences in its molecular motion.

A Matter of State A plastic bottle is compressed following a flight Photo Credit: Korte Purpose To help students understand that particle movement changes as a substance changes from one phase to another phase. Context How Roller Coasters Work The purpose of the coaster's initial ascent is to build up a sort of reservoir of potential energy. The concept of potential energy, often referred to as energy of position, is very simple: As the coaster gets higher in the air, gravity can pull it down a greater distance. You experience this phenomenon all the time -- think about driving your car, riding your bike or pulling your sled to the top of a big hill. The potential energy you build going up the hill can be released as kinetic energy -- the energy of motion that takes you down the hill. Once you start cruising down that first hill, gravity takes over and all the built-up potential e­nergy changes to kinetic energy. Gravity applies a constant downward force on the cars.