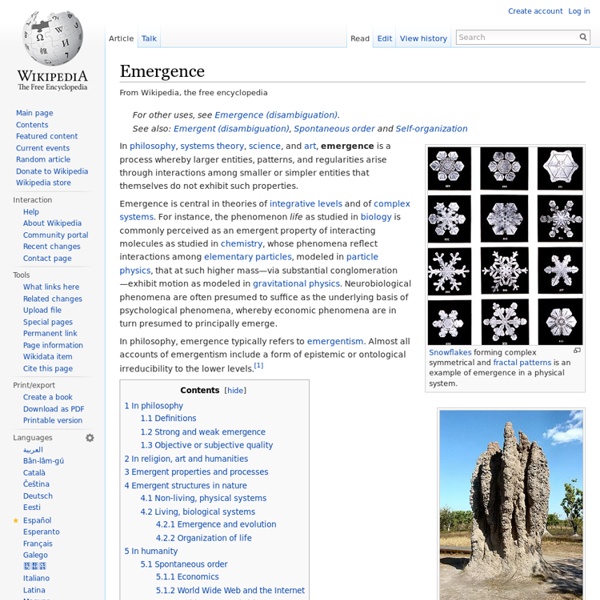 In philosophy, systems theory, science, and art, emergence is a process whereby larger entities, patterns, and regularities arise through interactions among smaller or simpler entities that themselves do not exhibit such properties. Emergence is central in theories of integrative levels and of complex systems. For instance, the phenomenon life as studied in biology is commonly perceived as an emergent property of interacting molecules as studied in chemistry, whose phenomena reflect interactions among elementary particles, modeled in particle physics, that at such higher mass—via substantial conglomeration—exhibit motion as modeled in gravitational physics. Neurobiological phenomena are often presumed to suffice as the underlying basis of psychological phenomena, whereby economic phenomena are in turn presumed to principally emerge. In philosophy, emergence typically refers to emergentism. In philosophy[edit] Main article: Emergentism Definitions[edit] Strong and weak emergence[edit]

Self-organization Self-organization occurs in a variety of physical, chemical, biological, robotic, social and cognitive systems. Common examples include crystallization, the emergence of convection patterns in a liquid heated from below, chemical oscillators, swarming in groups of animals, and the way neural networks learn to recognize complex patterns. Overview[edit] The most robust and unambiguous examples[1] of self-organizing systems are from the physics of non-equilibrium processes. Self-organization is also relevant in chemistry, where it has often been taken as being synonymous with self-assembly.

Japanese Scientists Create Touchable Holograms // Current To Our Faithful Current.com Users: Current's run has ended after eight exciting years on air and online. The Current TV staff has appreciated your interest, support, participation and unflagging loyalty over the years. Your contributions helped make Current.com a vibrant place for discussing thousands of interesting stories, and your continued viewership motivated us to keep innovating and find new ways to reflect the voice of the people. We now welcome the on-air and digital presence of Al Jazeera America, a new news network committed to reporting on and investigating real stories affecting the lives of everyday Americans in every corner of the country. You can keep up with what's new on Al Jazeera America and see this new brand of journalism for yourself at

Complex adaptive system They are complex in that they are dynamic networks of interactions, and their relationships are not aggregations of the individual static entities. They are adaptive in that the individual and collective behavior mutate and self-organize corresponding to the change-initiating micro-event or collection of events.[1][2] Overview[edit]

Intentionality Intentionality is a philosophical concept defined by the Stanford Encyclopedia of Philosophy as "the power of minds to be about, to represent, or to stand for, things, properties and states of affairs".[1] The term refers to the ability of the mind to form representations and has nothing to do with intention. The term dates from medieval Scholastic philosophy, but was resurrected by Franz Brentano and adopted by Edmund Husserl. The earliest theory of intentionality is associated with St.

Encyclopedia of Complexity and Systems Science Assembles for the first time the concepts and tools for analyzing complex systems in a wide range of fields Reflects the real world by integrating complexity with the deterministic equations and concepts that define matter, energy, and the four forces identified in nature Benefits a broad audience: undergraduates, researchers and practitioners in mathematics and many related fields Encyclopedia of Complexity and Systems Science provides an authoritative single source for understanding and applying the concepts of complexity theory together with the tools and measures for analyzing complex systems in all fields of science and engineering. The science and tools of complexity and systems science include theories of self-organization, complex systems, synergetics, dynamical systems, turbulence, catastrophes, instabilities, nonlinearity, stochastic processes, chaos, neural networks, cellular automata, adaptive systems, and genetic algorithms. Content Level » Research

What are Complex Adaptive Systems? Cause and Effect For many years scientists saw the universe as a linear place. One where simple rules of cause and effect apply. They viewed the universe as big machine and thought that if they took the machine apart and understood the parts, then they would understand the whole. They also thought that the universe's components could be viewed as machines, believing that if we worked on the parts of these machines and made each part work better, then the whole would work better.