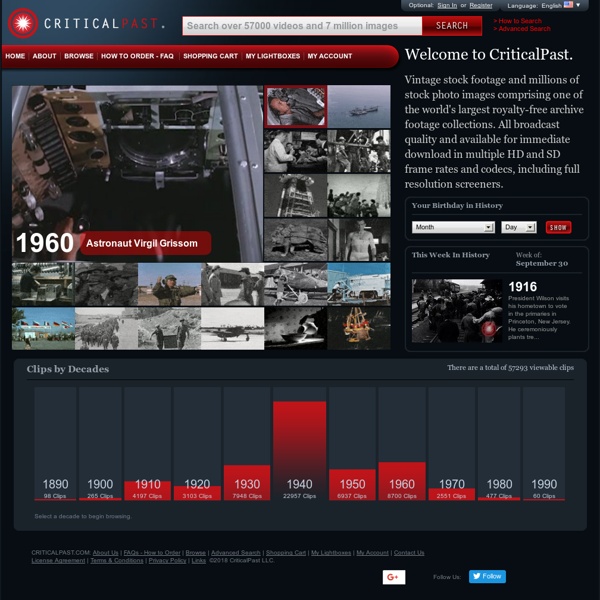 Sumerian Mythology FAQ by Christopher Siren, 1992, 1994, 2000 cbsiren at alum dot mit dot edu This FAQ used to be posted on the third of every month to alt.mythology. An older text copy of this FAQ is available via anonymous ftp pending *.answers approval at: rtfm.mit.edu at /pub/usenet/news.answers/mythology/sumer-faq Part 4: Editing Section 1 - Devices a) TRANSITIONS The shot is defined by editing but editing also works to join shots together.

100 Incredible YouTube Channels for History Buffs If you love history, or just want to learn more about it, YouTube has exactly what you need. Always up to the challege of providing thorough, accurate information, YouTube delivers channels from leading names in historical studies, from The Smithsonian to the Discovery Channel. You’re sure to find just the right information you need for your lecture, lesson plan, or perhaps just your personal viewing pleasure. General History The Online Books Page: Archives and Indexes General -- Non-English Language -- Specialty There's a vast range of online literature beyond what we index individually on The Online Books Page. Below we list some of the major sources and indexes of free online texts, in all languages, both general and specialized. General These are large, general-purpose collections with substantial English-language listings.

Periodis Web - Maps to be Used for the History of Europe Periodis Web - A Historical Atlas and Gazetteer of Europe from Year 1 to 2000 Europe in Year 2000 Europe in Year 1900 Europe in Year 1800 The Early Middle Ages, 284–1000 Professor Paul Freedman, Chester D. Tripp Professor of History 666 DIY Horror Filmmaking Tutorials It’s that time of year again, so we thought it was time to update last years killer feature “Horror Filmmaking: From Script to Scream.” That’s right a sequel! This time we are narrowing the focus a bit and concentrating on the DIY (Do It Yourself) elements. Hopefully this will help you slash the budget without murdering your production values. DIY: Blood, Bullets & Stunts

Reel American History - Resources - Historical Films List There are many, many films that can be said to depict eras or aspects of American history, but for the purposes of the Reel American History project, and following the lead of Robert Brent Toplin and Kenneth M. Cameron, we focus on feature films based on "real people and actual events." In doing so, for instance, we necessarily and regrettably subordinate some classic films like, say, The Grapes of Wrath, which captures the spirit of the Great Depression, because we are primarily interested in studying what film-makers do with a very specific historical record. In this respect the advice to students about selecting individual film projects might be helpful in identifying the kinds of films we feel are most appropriate for our archive.

The Online Books Page: Serials This page lists freely accessible archives of serials (such as magazines, journals, newspapers, and other periodicals). Archives are listed according to these criteria. To suggest additional books we should list, see this page . History Map Archive Browse the Map Archive The art and history of cartography, aka mapmaking, goes back to ancient times. Or at least what they thought it could look like. The Etymology Dictionary informs us that our English word map derives from the Latin word mappa, meaning napkin or cloth on which maps were drawn. The Map Archive

Classic Age The National Academy in Athens, with Apollo and Athena on their columns, and Socrates and Plato seated in front represents the intellectual legacy of the Classic Age that continues to inform how humans understand life, truth and the universe. Classical antiquity, era, or period is a broad term for a long period of cultural history centered on the Mediterranean Sea, which begins roughly with the earliest-recorded Greek poetry of Homer (eighth-seventh century B.C.E.), and continues through the rise of Christianity and the fall of the Western Roman Empire (fifth century C.E.), ending in the dissolution of classical culture with the close of Late Antiquity (300—600 AD), or the similar and better known periodization of history, the Early Middle Ages (500-1100 C.E.). Such a wide sampling of history and territory covers many rather disparate cultures and periods.

The Path To The New Model: Join The Community > Hope for Film It is easy to speak and to write of community, but how do we actually work together to make it better? We are dispersed across the globe, some professional, some amateur, but all driven by passion for a more diverse and ambitious film culture. We have the tools. We have the know how, but we still have a long road before us. Stepping down the path requires us to put one foot in front of the other, and make some progress, even if it might be in the wrong direction. Today's guest post is from filmmaker and lecturer James Fair, a regular contributor to this blog and discussion.

National Jukebox LOC.gov WARNING: Historical recordings may contain offensive language. Read the disclaimer Now Playing... Elk's reunion march Le parlate d'amor El teléfono a larga distancia At the jazz band ball Everybody's jazzin' it Pack up your troubles in your old kit bag and smile, smile, smile! View This Playlist Free Books : Download & Streaming : Ebook and Texts Archive : Internet Archive Additional collections of scanned books, articles, and other texts (usually organized by topic) are presented here. The American Libraries collection includes material contributed from across the United States. Institutions range from the Library of Congress to many local public libraries. As a whole, this collection of material brings holdings that cover many facets of American life and scholarship into the public domain.