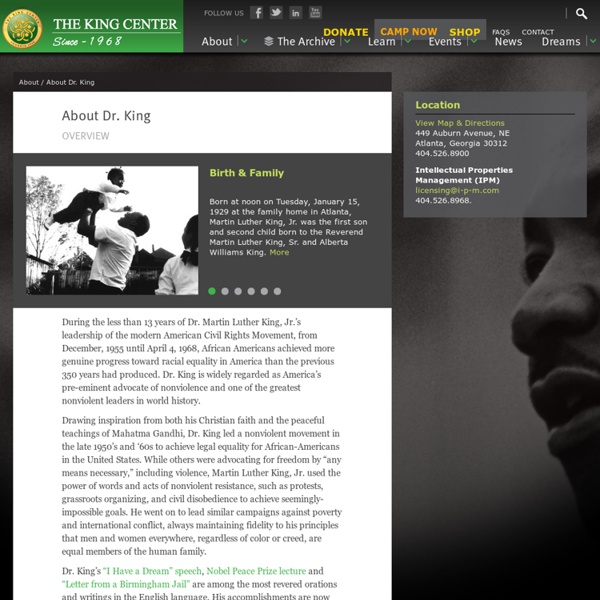 During the less than 13 years of Dr. Martin Luther King, Jr.’s leadership of the modern American Civil Rights Movement, from December, 1955 until April 4, 1968, African Americans achieved more genuine progress toward racial equality in America than the previous 350 years had produced. Dr. King is widely regarded as America’s pre-eminent advocate of nonviolence and one of the greatest nonviolent leaders in world history. Drawing inspiration from both his Christian faith and the peaceful teachings of Mahatma Gandhi, Dr. Dr. Some of Dr. In 1955, he was recruited to serve as spokesman for the Montgomery Bus Boycott, which was a campaign by the African-American population of Montgomery, Alabama to force integration of the city’s bus lines.

Civil Rights Movement - Black History The civil rights movement was a struggle for social justice that took place mainly during the 1950s and 1960s for blacks to gain equal rights under the law in the United States. The Civil War had officially abolished slavery, but it didn’t end discrimination against blacks—they continued to endure the devastating effects of racism, especially in the South. By the mid-20th century, African Americans had had more than enough of prejudice and violence against them. They, along with many whites, mobilized and began an unprecedented fight for equality that spanned two decades. Jim Crow Laws During Reconstruction, blacks took on leadership roles like never before. In 1868, the 14th Amendment to the Constitution gave blacks equal protection under the law. To marginalize blacks, keep them separate from whites and erase the progress they’d made during Reconstruction, “Jim Crow” laws were established in the South beginning in the late 19th century. World War II and Civil Rights Rosa Parks Sources

The Modern Civil Rights Movement, 1954-1964 - Civil Rights In the greatest mass movement in modern American history, black demonstrations swept the country seeking constitutional equality at the national level, as well as an end to Massive Resistance (state and local government-supported opposition to school desegregation) in the South. Presidential executive orders, the passage of two Civil Rights Acts, and the federal government's first military enforcement of civil rights brought an end to de jure segregation. The success of this movement inspired other minorities to employ similar tactics. Three years after the Supreme Court ruled school segregation unconstitutional in Brown v. Board of Education and two years after the Montgomery, Alabama, bus boycott, President Dwight D. Eisenhower signed the first civil rights bill since Reconstruction. Gains in civil rights varied for minorities during this era. Asian Americans likewise experienced gains and losses in civil rights. During this time, the homophile movement grew and changed direction.