Everything you need to know about the internet 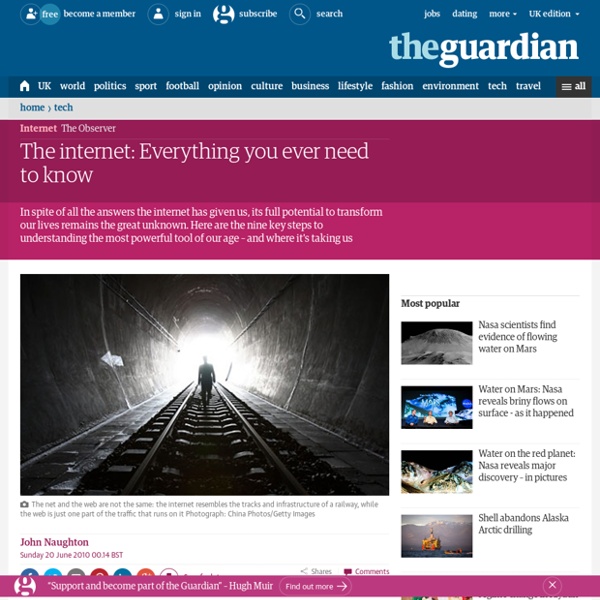 A funny thing happened to us on the way to the future. The internet went from being something exotic to being boring utility, like mains electricity or running water – and we never really noticed. So we wound up being totally dependent on a system about which we are terminally incurious. You think I exaggerate about the dependence? Well, just ask Estonia, one of the most internet-dependent countries on the planet, which in 2007 was more or less shut down for two weeks by a sustained attack on its network infrastructure. The internet has quietly infiltrated our lives, and yet we seem to be remarkably unreflective about it. Mainstream media don't exactly help here, because much – if not most – media coverage of the net is negative. All of which might lead a detached observer to ask: if the internet is such a disaster, how come 27% of the world's population (or about 1.8 billion people) use it happily every day, while billions more are desperate to get access to it? But how many ideas?

Repositories Support Project Top 7 Semantic Search Engines As An Alternative To Google There’s no denying the power and popularity of the Google search engine, and in comparison to other similar search engines such as Bing, where results are based on page rankings and algorithms, they excel. But there are other ways to search the web, using what are known as semantic search engines. Using a semantic search engine will ensure more relevant results based on the ability to understand the definition of the word or term that is being searched for, rather than on numbers. This is a list of the top 7 search engines to get you started in the world of semantic searching. Kngine Kngine’s search results are divided into either web results, or image results. Kngine currently contains more than 8 million Concepts, and that is where the site’s strength lies. You can quickly share results from Kngine on Twitter, Facebook, Digg and Delicious and Kngine can be set as your default search engine if you are using Firefox, Google Chrome or Internet Explorer. Hakia [NO LONGER WORKS] Kosmix Evri

Gallery: Digitizing the past and present at the Library of Congress The Library of Congress has nearly 150 million items in its collection, including at least 21 million books, 5 million maps, 12.5 million photos and 100,000 posters. The largest library in the world, it pioneers both preservation of the oldest artifacts and digitization of the most recent--so that all of it remains available to future generations. I recently took a tour of two LoC departments that exemplify this mission: the Preservation Research and Testing Division in Washington, D.C., and the National Audio-Visual Conservation Center in Culpeper, Va. The library's preservation specialists use the latest technology to study and scan ancient books, maps and other historical artifacts. One process, called scanning electron microscopy, allows them to create elemental maps of manuscripts, identifying the chemical nature of inks and pigments, or the paper itself. X-rays, however, aren't easy to work around. "We don't filter at the camera, we illuminate with small wavelengths," Fenella said.

Marian the Cybrarian - Advice By Thomas H. Benton For all the concern expressed about the imminent demise of the college library, there may never have been a time when librarians seemed more vital, forward-thinking—even edgy—than they do now. It's a dated reference, but today's information professionals often remind me more of Ian Malcolm, the "chaos theorist" played by Jeff Goldblum in Jurassic Park (1993), than of the eyeglass-chain-wearing librarians of yore, if they ever existed in significant numbers. (I have seen only one, Mrs. Evelyn, from my elementary school in the early 70s.) It's not that many of today's librarians routinely dress in sunglasses and black leather (though some do). Marilyn Johnson's This Book Is Overdue! As Johnson presents them, librarians may seem aggressively avant-garde, but they are rarely techno-utopians. In my experience, librarians almost always pass the beer test: They are among the most likeable people you'll find at any college. Thomas H.

Technology Review: The Death of Libraries? At most libraries, the hand-typed card catalogues thumbed by generations of patrons have been supplanted by electronic indexes accessed via PCs locally or over the Web. Now that Google has agreed to scan millions of books from five major libraries and to make their contents searchable on the Web – a project that experts say is likely to yield spinoff technologies that drastically lower the costs of digitization and catalyze similar efforts worldwide – can the disappearance of libraries themselves be far behind? Most librarians say no, as our story “The Infinite Library,” reports. Whatever the form in which book content is stored, librarians believe, people will still come to libraries for expert help finding information, for public access to the Internet, or for the comfortable atmosphere libraries provide for reading and reflection. All of that may be true.

Common as Air: Revolution, Art, and Ownership opens nation&#39;s first bookless library on a university campus By Christi Fish Public Affairs Specialist (Sept. 9, 2010)--UTSA officials announced Thursday the opening of the Applied Engineering and Technology (AET) Library, the nation's first completely bookless library on a college or university campus. The 80-person capacity library, which caters to College of Sciences and College of Engineering students, is a satellite of the larger John Peace Library on the Main Campus. Electronic research is central to the AET Library. UTSA's electronic library is catching on quickly with students, who are finding that the library staff is more available to assist them now that they don't have to circulate and reshelve books. The trend to move higher education library collections online began in October 2000, when Kansas State University opened the Fiedler Engineering Library. UTSA designed its bookless library to engage students in an online format within a contemporary new space.

Academia tests crowd-sourcing The word "medieval" is often used, and perhaps appropriately so, by scholars and academics when describing the world of academia. Any grad student can surely list off names of several resentful scholars they know: scholars who spent a near decade slogging through doctoral research only to end up teaching equally resentful Freshmen part-time for some $2,000 a month. On paper, a Ph.D. life-plan sounds ludicrous: go to college for four years; then sign up for an additional six to 10 years. Upon that, if you’re really lucky and really smart, you might end up lucky enough to find a job making, oh some $45,000 a year. To top it off, to achieve tenure, professors must have their work appear in elite publications. The process can take months, or longer, despite the fact that the world is serioulsy moving away from long publication cycles. But movements are afoot to bring the peer-review process to the digital age by allowing a crowd-sourcing process to the evaluation and assessment of work.

University Assigns Freshmen &quot;Personal Librarians&quot; Many people have a love/hate relationship with Google, but few have it to such a degree as librarians. For every innovation that makes the task of finding information easier, librarians both have occasion to be thankful for the timesavers--but also fearful that new technology could render their services obsolete. Add to this a habit for Google to occasionally slight libraries (as in this Google Instant announcement video which excitedly boasts that the Internet’s contents had swelled to a million times the holdings of all U.S. libraries). In this context, what are we to make of a recent program at Drexel University, which is assigning to each of its 2,750 freshman a “personal librarian”? Though Nitecki may be underestimating some of her students, Drexel’s personal librarian program certainly couldn’t hurt. If Google is causing librarians to hustle and innovate, what we’re seeing is not the last desperate flounderings of an obsolete profession.