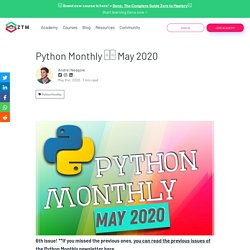 **If you missed the previous ones, you can read the previous issues of the Python Monthly newsletter here. If it’s your first time here… (otherwise, skip this part) Being a Python developer is a fantastic career option. Python is now the most popular language with lots of growing job demand (especially in the fields of Web, Data Science and Machine Learning). You have many job opportunities, you can work around the world, and you get to solve hard problems. This monthly newsletter is focused on keeping you up to date with the industry, keeping your skills sharp, without wasting your valuable time. If you want to be the first to get next month's issue of Python Monthly and receive other exclusive ZTM content once in a while, subscribe below 👇 Best articles. The Best Python Books for All Skill Levels. Just about every year is a good year to be investing in Python learning, whether you are a beginner or an expert. 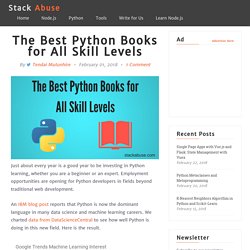 Employment opportunities are opening for Python developers in fields beyond traditional web development. An IBM blog post reports that Python is now the dominant language in many data science and machine learning careers. We charted data from DataScienceCentral to see how well Python is doing in this new field. Here is the result. As you can see, it seems to be doing pretty well. Mypy - Optional Static Typing for Python. 2. Analyse lexicale — documentation Python 3.6.3. A Python program is read by a parser. 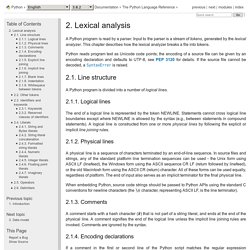 Input to the parser is a stream of tokens, generated by the lexical analyzer. This chapter describes how the lexical analyzer breaks a file into tokens. Python reads program text as Unicode code points; the encoding of a source file can be given by an encoding declaration and defaults to UTF-8, see PEP 3120 for details. If the source file cannot be decoded, a SyntaxError is raised. 2.1. UAX #31: Unicode Identifier and Pattern Syntax.

Unicode® Standard Annex #31 Summary This annex describes specifications for recommended defaults for the use of Unicode in the definitions of identifiers and in pattern-based syntax. 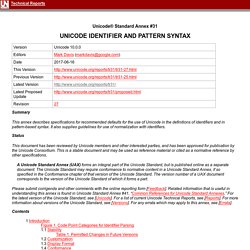 It also supplies guidelines for use of normalization with identifiers. Status This document has been reviewed by Unicode members and other interested parties, and has been approved for publication by the Unicode Consortium. A Unicode Standard Annex (UAX) forms an integral part of the Unicode Standard, but is published online as a separate document. Supporting Non-ASCII Identifiers. This PEP suggests to support non-ASCII letters (such as accented characters, Cyrillic, Greek, Kanji, etc.) in Python identifiers. 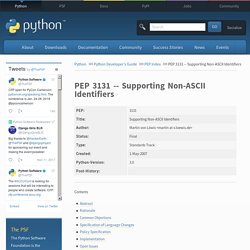 Python code is written by many people in the world who are not familiar with the English language, or even well-acquainted with the Latin writing system. Such developers often desire to define classes and functions with names in their native languages, rather than having to come up with an (often incorrect) English translation of the concept they want to name. By using identifiers in their native language, code clarity and maintainability of the code among speakers of that language improves. For some languages, common transliteration systems exist (in particular, for the Latin-based writing systems).

For other languages, users have larger difficulties to use Latin to write their native words. Some objections are often raised against proposals similar to this one. Style Guide for Python Code. This document gives coding conventions for the Python code comprising the standard library in the main Python distribution. Please see the companion informational PEP describing style guidelines for the C code in the C implementation of Python [1]. This document and PEP 257 (Docstring Conventions) were adapted from Guido's original Python Style Guide essay, with some additions from Barry's style guide [2]. This style guide evolves over time as additional conventions are identified and past conventions are rendered obsolete by changes in the language itself. 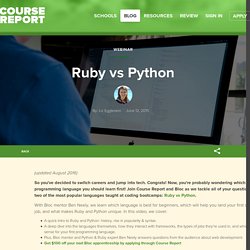 Congrats! Now, you're probably wondering which programming language you should learn first! Join Course Report and Bloc as we tackle all of your questions about two of the most popular languages taught at coding bootcamps: Ruby vs Python. With Bloc mentor Ben Neely, we learn which language is best for beginners, which will help you land your first developer job, and what makes Ruby and Python unique. A quick intro to Ruby and Python: history, rise in popularity & syntax. Vinta/awesome-python: A curated list of awesome Python frameworks, libraries, software and resources. Pyjamas 0.8.1. Pyjamas Widget API for Web applications, in Python Current Release: 0.8.1~+alpha1--------------- This is the 0.8.1~+alpha1 release of Pyjamas. 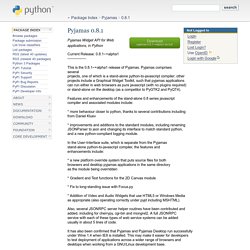 Pyjamas comprises severalprojects, one of which is a stand-alone python-to-javascript compiler; otherprojects include a Graphical Widget Toolkit, such that pyjamas applicationscan run either in web browsers as pure javascript (with no plugins required)or stand-alone on the desktop (as a competitor to PyGTK2 and PyQT4). Features and enhancements of the stand-alone 0.8 series javascriptcompiler and associated modules include: * more behaviour closer to python, thanks to several contributions including from Daniel Kluev * improvements and additions to the standard modules, including renaming JSONParser to json and changing its interface to match standard python, and a new python-compliant logging module.

Pyjeon Software. Pyjaco – Python implemented in JavaScript. Skulpt. Pyjs. No, Seriously, Why Should I Learn to Code? The geeks have inherited the earth. 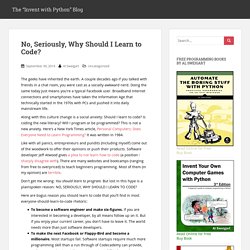 A couple decades ago if you talked with friends in a chat room, you were cast as a socially-awkward nerd. Doing the same today just means you're a typical Facebook user. Broadband Internet connections and smartphones have taken the Information Age that technically started in the 1970s with PCs and pushed it into daily mainstream life. Along with this culture change is a social anxiety: Should I learn to code? Is coding the new literacy? Like with all panics, entrepreneurs and pundits (including myself) come out of the woodwork to offer their opinions or push their products. Don't get me wrong: You should learn to program. Practical Programming for Total Beginners. Les docstrings en Python. Du fait de la nature du tuto, exceptionellement je ne respecterai pas le nouveau format de rédaction. 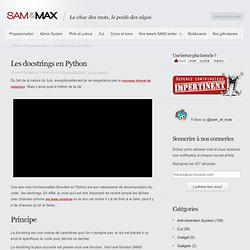 Labs. Codecademy Labs is a place for you to program in Ruby, Python, and JavaScript online without downloading a code editor or IDE. 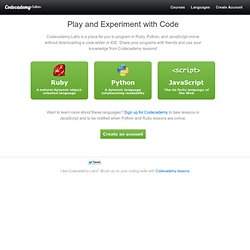 Share your programs with friends and use your knowledge from Codecademy lessons! Want to learn more about these languages? Aptana Studio — Advanced Python 0.3 documentation. Aptana Studio is an IDE - integrated development environment - based on the Eclipse framework. It provides powerful tools for exploring, understanding, and refactoring your code. Because Aptana Studio is Eclipse + a plugin, in class I may refer to “Aptana” and “Eclipse” interchangeably. Unless explicitly noted, both terms refer to the combination of Eclipse framework + Aptana Studio plugin. Aptana’s Python support was formerly a separate Eclipse plugin called PyDev. PyDev was purchased by Aptana and folded into Aptana Studio. Editors. If you have anything to contribute -- e.g. configurations for editors, new editors, or opinion -- don't hesitate to edit or create pages. There's an EditorConfigurationHowto available.