Think Python: How to Think Like a Computer Scientist 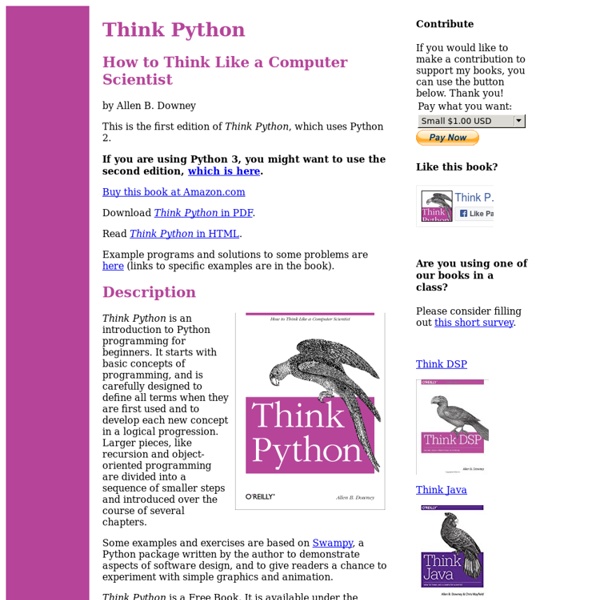 How to Think Like a Computer Scientist by Allen B. Downey This is the first edition of Think Python, which uses Python 2. If you are using Python 3, you might want to use the second edition, which is here. Buy this book at Amazon.com Download Think Python in PDF. Read Think Python in HTML. Example programs and solutions to some problems are here (links to specific examples are in the book). Description Think Python is an introduction to Python programming for beginners. Some examples and exercises are based on Swampy, a Python package written by the author to demonstrate aspects of software design, and to give readers a chance to experiment with simple graphics and animation. Think Python is a Free Book. If you have comments, corrections or suggestions, please send me email at feedback{at}thinkpython{dot}com. Other Free Books by Allen Downey are available from Green Tea Press. Download Precompiled copies of the book are available in PDF. Earlier Versions Translations and adaptations

How to Think Like a Computer Scientist Learning with Python by Allen Downey, Jeff Elkner and Chris Meyers. This book is now available for sale at Lulu.com. How to Think... is an introduction to programming using Python, one of the best languages for beginners. How to Think... is a Free Book available under the GNU Free Documentation License. Please send suggestions, corrections and comments about the book to feedback{at}thinkpython{dot}com. Download The book is available in a variety of electronic formats: Precompiled copies of the book are available in PDF and Postscript . Translations Here are some translations of the book into other (natural) languages: Spanish translation by Gregorio Inda. Other Free Books by Allen Downey are available from Green Tea Press. If you are using this book and would like to make a contribution to support my work, please consider making a donation toward my web hosting bill by clicking on the icon below.

Joe's Blog: An intro to modern OpenGL. Chapter 1: The Graphics Pipeline An intro to modern OpenGL. Chapter 1: The Graphics Pipeline updated April 5, 2010 17:12:05 PDT Table of Contents | Chapter 2 » OpenGL has been around a long time, and from reading all the accumulated layers of documentation out there on the Internet, it's not always clear what parts are historic and what parts are still useful and supported on modern graphics hardware. Update: Join the Reddit discussion. What is OpenGL? Another recent development has been the adoption of general purpose GPU (GPGPU) libraries, including nVidia's CUDA and Khronos' OpenCL. For these tutorials, I'm going to assume you're already a programmer and that you know C, but that you haven't necessarily seen OpenGL or done graphics programming before. Where do I get OpenGL, GLUT, and GLEW? OpenGL comes standard in some form or another on MacOS X, Windows, and most Linux distributions. To install GLUT and GLEW, look for the binary packages on their respective sites. The graphics pipeline The vertex and element arrays

Add-on Developer Hub Green Tea Press: Free Computer Science Books Drawing Graphics with Canvas - MDC Doc Center Most of this content (but not the documentation on drawWindow) has been rolled into the more expansive Canvas tutorial, this page should probably be redirected there as it's now redundant but some information may still be relevant. Introduction With Firefox 1.5, Firefox includes a new HTML element for programmable graphics. <canvas> creates a fixed size drawing surface that exposes one or more rendering contexts. The 2D Rendering Context A Simple Example To start off, here's a simple example that draws two intersecting rectangles, one of which has alpha transparency: function draw() { var ctx = document.getElementById('canvas').getContext('2d'); ctx.fillStyle = "rgb(200,0,0)"; ctx.fillRect (10, 10, 55, 50); ctx.fillStyle = "rgba(0, 0, 200, 0.5)"; ctx.fillRect (30, 30, 55, 50);} draw(); The draw function gets the canvas element, then obtains the 2d context. The fillRect, strokeRect, and clearRect calls render a filled, outlined, or clear rectangle. Using Paths Graphics State Additional Features

Python open source framework, web application software development | Flex - Adobe The Adobe USA site has been optimized for users within the United States. If you live outside the U.S., we recommend that you visit your local site for the most relevant information, including pricing, promotions, and local events. United States Canada - English Your country selection will be remembered for future visits. You can change this selection at any time using the country selector at the bottom of the page. Le site web américain d'Adobe a été optimisé pour les utilisateurs résidant aux États-Unis. Canada - Français Le pays choisi sera enregistré pour vos prochaines visites. View complete list of countries ›

The Python Tutorial — Python v3.3a0 documentation Python is an easy to learn, powerful programming language. It has efficient high-level data structures and a simple but effective approach to object-oriented programming. Python’s elegant syntax and dynamic typing, together with its interpreted nature, make it an ideal language for scripting and rapid application development in many areas on most platforms. The Python interpreter and the extensive standard library are freely available in source or binary form for all major platforms from the Python web site, and may be freely distributed. The same site also contains distributions of and pointers to many free third party Python modules, programs and tools, and additional documentation. The Python interpreter is easily extended with new functions and data types implemented in C or C++ (or other languages callable from C). This tutorial introduces the reader informally to the basic concepts and features of the Python language and system.

Properties - The Python Saga - Part 3 Properties come out of a tired programming language genesis. In the beginning, there were structs. The trouble with structs was that an opaque data structure could not programmatically monitor or intercept access and mutation of its member data. So that's not a big deal; we could solve the problem with classes. The best practice to avoid programming yourself into a corner was to never expose a datum; you would write accessor and mutator functions, whether you needed them at the moment or not. The idea of managed properties came along eventually in various languages (Python, C#, some implementations of JavaScript, and recent versions of [C]). Lets observe this design shift in Python. class Foo(object): def __init__(self); self.bar = 10 Here's some other fellow's code that uses your class: foo = Foo() foo.bar = 20 print foo.bar del foo.bar So there you have it. Now we have a Foo class that transparently maintains the invariant that "bar" will always be half of "baz".

Non-Programmer's Tutorial for Python 3 Authors Contributors to this book Front matter Initial remarks Intro Installing and using Python – where to get help Hello, World The famous first program – screen output – variables – numbers and calculations Who Goes There? Interactive input – strings Count to 10 while loops Decisions if statements Debugging Finding out what goes wrong Defining Functions Structuring programs with the use of functions Advanced Functions Example (Almost) mind-blowing example of how programmers can think Lists Variables containing more than one value For Loops A second kind of loop Boolean Expressions Computer logic – True and False – and and or – not Dictionaries Variables containing key/value pairs Using Modules Extensions to the standard set of functionality More on Lists Using elements or parts of lists Revenge of the Strings More advanced text manipulations File IO Reading from files and writing to files Dealing with the imperfect How to handle errors Recursion Recursive Functions Intro to Object Oriented Programming in Python 3 The End

Essential Python Reading List Here’s my essential Python reading list. I’ve tried to order the items so you can pause or stop reading at any point: at every stage you’ll have learned about as much possible about Python for the effort you’ve put in. The Zen of Python The Zen of Python is so short I can include it here in its entirety. Typing import this in an interpreted session gives a pythonic spin on “Hello, world”. >>> import this The Zen of Python, by Tim Peters Beautiful is better than ugly. If this doesn’t ring true, Python isn’t for you. Python Tutorial Your next stop should be the Python tutorial. start here The latest version (by which I mean the version corresponding to the most recent stable release of Python) can be found on the web at but I recommend you find and bookmark the same page from your local Python installation: it will be available offline, pages will load fractionally quicker, and you’re sure to be reading about the version of Python you’re actually running. What’s New?