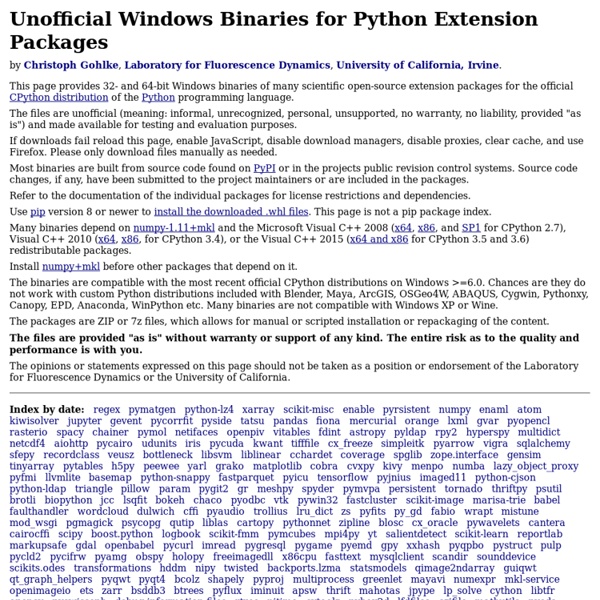 by Christoph Gohlke, Laboratory for Fluorescence Dynamics, University of California, Irvine. This page provides 32- and 64-bit Windows binaries of many scientific open-source extension packages for the official CPython distribution of the Python programming language. The files are unofficial (meaning: informal, unrecognized, personal, unsupported, no warranty, no liability, provided "as is") and made available for testing and evaluation purposes. If downloads fail reload this page, enable JavaScript, disable download managers, disable proxies, clear cache, and use Firefox. Please only download files manually as needed. Most binaries are built from source code found on PyPI or in the projects public revision control systems. Refer to the documentation of the individual packages for license restrictions and dependencies. Use pip version 8 or newer to install the downloaded .whl files. Install numpy+mkl before other packages that depend on it. Build Environment

Installation and quick start — nose 1.3.0 documentation nose extends unittest to make testing easier. On most UNIX-like systems, you’ll probably need to run these commands as root or using sudo. Install nose using setuptools/distribute: Or pip: Or, if you don’t have setuptools/distribute installed, use the download link at right to download the source package, and install it in the normal fashion: Ungzip and untar the source package, cd to the new directory, and: However, please note that without setuptools/distribute installed, you will not be able to use third-party nose plugins.

Canny edge detector — skimage v0.10dev docs The Canny filter is a multi-stage edge detector. It uses a filter based on the derivative of a Gaussian in order to compute the intensity of the gradients.The Gaussian reduces the effect of noise present in the image. Then, potential edges are thinned down to 1-pixel curves by removing non-maximum pixels of the gradient magnitude. Walt Disney Animation Studios BRDF Explorer is an application that allows the development and analysis of bidirectional reflectance distribution functions (BRDFs). It can load and plot analytic BRDF functions (coded as functions in OpenGL's GLSL shader language), measured material data from the MERL database, and anisotropic measured material data from MIT CSAIL. Graphs and visualizations update in realtime as parameters are changed, making it a useful tool for evaluating and understanding different BRDFs (and other component functions). Motivation In the pursuit of visual realism in our films, we have spent a considerable amount of time exploring the strengths and weaknesses of different BRDFs.

wheel 0.30.0a0 A built-package format for Python. A wheel is a ZIP-format archive with a specially formatted filename and the .whl extension. It is designed to contain all the files for a PEP 376 compatible install in a way that is very close to the on-disk format. How to Think Like a Computer Scientist — How to Think like a Computer Scientist: Interactive Edition This interactive book is a product of the Runestone Interactive Project at Luther College, led by Brad Miller and David Ranum. There have been many contributors to the project. Our thanks especially to the following: This book is based on the Original work by: Jeffrey Elkner, Allen B. Downey, and Chris MeyersActivecode based on SkulptCodelens based on Online Python TutorMany contributions from the CSLearning4U research group at Georgia Tech.ACM-SIGCSE for the special projects grant that funded our student Isaac Dontje Lindell for the summer of 2013.NSF The Runestone Interactive tools are open source and we encourage you to contact us, or grab a copy from GitHub if you would like to use them to write your own resources.

Local Binary Pattern for texture classification — skimage v0.10dev docs In this example, we will see how to classify textures based on LBP (Local Binary Pattern). LBP looks at points surrounding a central point and tests whether the surrounding points are greater than or less than the central point (i.e. gives a binary result). Before trying out LBP on an image, it helps to look at a schematic of LBPs. The below code is just used to plot the schematic. The figure above shows example results with black (or white) representing pixels that are less (or more) intense than the central pixel. Thea Render The new integrated plugin for 3dsMax has just arrived and licensed users can grab the plugin as a free update! Bundle with Motiva Colimo and create infinite variations from a single render. Perform luminance and illuminance analysis and generate reports out-of-the-box. Thea Render offers a variety of high quality Model and Material Libraries.

Twisted Twisted is an event-driven networking engine written in Python and licensed under the open source ​MIT license. Twisted runs on Python 2 and an ever growing subset also works with Python 3. Twisted makes it easy to implement custom network applications. Here's a TCP server that echoes back everything that's written to it: NumPy for Matlab Users - MATLAB® and !NumPy/!SciPy have a lot in common. But there are many differences. EPHERE: Project: Zookeeper Zookeeper is a big asset to the toolbox of any technical artist working with 3ds Max... " At last we can create, edit and manage all the components of a 3ds Max scene and their relationships in one unified, clean graph;... If you like node-based systems and use 3ds Max, this one is a must." Full Text - Martin Breidt (www.breidt.net) "Having been a 'Maya guy' for many years prior to switching to Max, Zookeeper is exactly the tool I've been waiting for. Having the uncanny ability to seem familiar and innovative at the same time, Zookeeper takes the node-based workflow to the next level. I'd recommend Zookeeper to almost any 3ds Max user out there; from newbies to the most seasoned of artists." Full Text - Jason Donati (Chair, Media Arts & Animation - The New England Institute of Art) "Zookeeper was another evolution for us, ...

Download – Orange This page contains nightly builds from the code repository. These are typically stable and we recommend using them. Windows ¶

Super handy set of Python libraries, built for Windows. by fooziex May 20