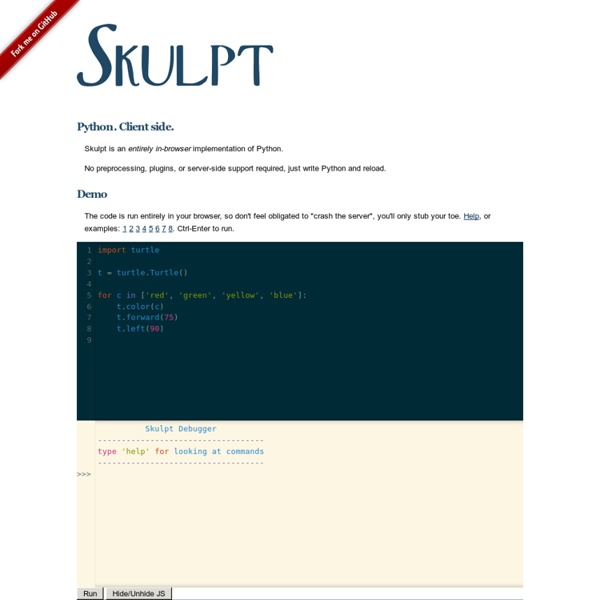 Python. Client side. Skulpt is an entirely in-browser implementation of Python. No preprocessing, plugins, or server-side support required, just write Python and reload. Demo The code is run entirely in your browser, so don't feel obligated to "crash the server", you'll only stub your toe.

Pyjamas 0.8.1 Pyjamas Widget API for Web applications, in Python Current Release: 0.8.1~+alpha1--------------- This is the 0.8.1~+alpha1 release of Pyjamas. Pyjamas comprises severalprojects, one of which is a stand-alone python-to-javascript compiler; otherprojects include a Graphical Widget Toolkit, such that pyjamas applicationscan run either in web browsers as pure javascript (with no plugins required)or stand-alone on the desktop (as a competitor to PyGTK2 and PyQT4). Try IPython from your Browser: PythonAnywhere IPython is an enhanced interactive Python interpreter, offering tab completion, object introspection, and much more. It's running on the right-hand side of this page, so you can try it out right now. Here's a quick micro-tutorial to get you started with some of the fun stuff it provides:

No, Seriously, Why Should I Learn to Code? The geeks have inherited the earth. A couple decades ago if you talked with friends in a chat room, you were cast as a socially-awkward nerd. Doing the same today just means you're a typical Facebook user. Broadband Internet connections and smartphones have taken the Information Age that technically started in the 1970s with PCs and pushed it into daily mainstream life. Along with this culture change is a social anxiety: Should I learn to code? Is coding the new literacy? Ruby vs Python: Choosing Your First Programming Language: Course Report (updated August 2016) So you've decided to switch careers and jump into tech. Congrats! Now, you're probably wondering which programming language you should learn first! Join Course Report and Bloc as we tackle all of your questions about two of the most popular languages taught at coding bootcamps: Ruby vs Python. With Bloc mentor Ben Neely, we learn which language is best for beginners, which will help you land your first developer job, and what makes Ruby and Python unique.

Style Guide for Python Code This document gives coding conventions for the Python code comprising the standard library in the main Python distribution. Please see the companion informational PEP describing style guidelines for the C code in the C implementation of Python [1]. This document and PEP 257 (Docstring Conventions) were adapted from Guido's original Python Style Guide essay, with some additions from Barry's style guide [2]. This style guide evolves over time as additional conventions are identified and past conventions are rendered obsolete by changes in the language itself. Many projects have their own coding style guidelines.

Supporting Non-ASCII Identifiers This PEP suggests to support non-ASCII letters (such as accented characters, Cyrillic, Greek, Kanji, etc.) in Python identifiers. Python code is written by many people in the world who are not familiar with the English language, or even well-acquainted with the Latin writing system. Such developers often desire to define classes and functions with names in their native languages, rather than having to come up with an (often incorrect) English translation of the concept they want to name.

UAX #31: Unicode Identifier and Pattern Syntax Unicode® Standard Annex #31 Summary This annex describes specifications for recommended defaults for the use of Unicode in the definitions of identifiers and in pattern-based syntax. It also supplies guidelines for use of normalization with identifiers. Status 2. Analyse lexicale — documentation Python 3.6.3 A Python program is read by a parser. Input to the parser is a stream of tokens, generated by the lexical analyzer. This chapter describes how the lexical analyzer breaks a file into tokens. Python reads program text as Unicode code points; the encoding of a source file can be given by an encoding declaration and defaults to UTF-8, see PEP 3120 for details. If the source file cannot be decoded, a SyntaxError is raised. 2.1.

The Best Python Books for All Skill Levels Just about every year is a good year to be investing in Python learning, whether you are a beginner or an expert. Employment opportunities are opening for Python developers in fields beyond traditional web development. An IBM blog post reports that Python is now the dominant language in many data science and machine learning careers. We charted data from DataScienceCentral to see how well Python is doing in this new field. Here is the result. Labs Codecademy Labs is a place for you to program in Ruby, Python, and JavaScript online without downloading a code editor or IDE. Share your programs with friends and use your knowledge from Codecademy lessons! Want to learn more about these languages? Sign up for Codecademy to take lessons in JavaScript and to be notified when Python and Ruby lessons are online.