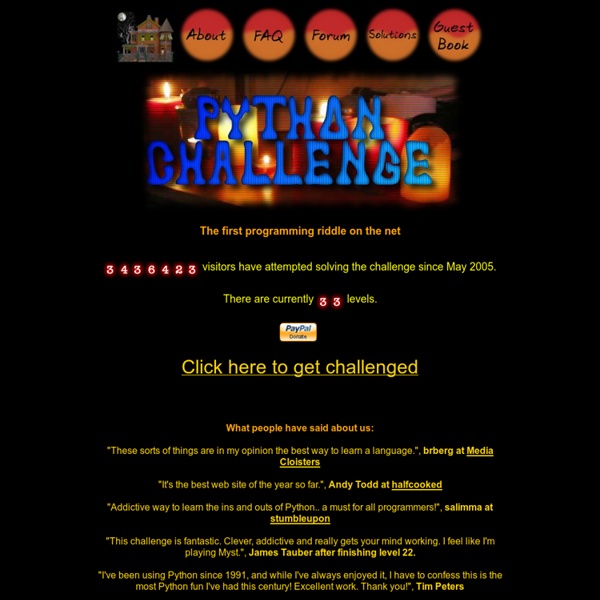 Solving Every Sudoku Puzzle by Peter Norvig In this essay I tackle the problem of solving every Sudoku puzzle. It turns out to be quite easy (about one page of code for the main idea and two pages for embellishments) using two ideas: constraint propagation and search. The Zen of Python Abstract Long time Pythoneer Tim Peters succinctly channels the BDFL's guiding principles for Python's design into 20 aphorisms, only 19 of which have been written down. The Zen of Python Beautiful is better than ugly. Explicit is better than implicit. Simple is better than complex.

Becoming a Pythonista — Platipy 0.2 documentation This chapter is will provide a very brief review of some important python concepts which will be useful and necessary. The basic concepts will be for those who are unfamiliar with Python, but a good refresher for those who don’t write in Python every day. Intermediate concepts will be great for programmers of all levels to refresh on some Python idioms. Code Like a Pythonista: Idiomatic Python In this interactive tutorial, we'll cover many essential Python idioms and techniques in depth, adding immediately useful tools to your belt. There are 3 versions of this presentation: ©2006-2008, licensed under a Creative Commons Attribution/Share-Alike (BY-SA) license. My credentials: I am a resident of Montreal,father of two great kids, husband of one special woman,a full-time Python programmer,author of the Docutils project and reStructuredText,an editor of the Python Enhancement Proposals (or PEPs),an organizer of PyCon 2007, and chair of PyCon 2008,a member of the Python Software Foundation,a Director of the Foundation for the past year, and its Secretary.

Why Python — Pyzo - Python to the people Python is a very-high-level dynamic object-oriented programming language. It’s designed to be easy to program and easy to read. Guido van Rossum started the design of Python in 1980. Software Carpentry The Problem Many scientists and engineers spend much of their lives writing, debugging, and maintaining software, but only a handful have ever been taught how to do this effectively: after a couple of introductory courses, they are left to rediscover (or reinvent) the rest of programming on their own. The result? Most spend far too much time wrestling with software when they'd rather be doing research, but still have no idea how reliable or efficient that software is.   Google for Education   Welcome to Google's Python Class -- this is a free class for people with a little bit of programming experience who want to learn Python. The class includes written materials, lecture videos, and lots of code exercises to practice Python coding. These materials are used within Google to introduce Python to people who have just a little programming experience. The first exercises work on basic Python concepts like strings and lists, building up to the later exercises which are full programs dealing with text files, processes, and http connections.

Code Style If you ask Python programmers what they like most in Python, they will often say its high readability. Indeed, a high level of readability is at the heart of the design of the Python language, following the recognized fact that code is read much more often than it is written. One reason for Python code to be easily read and understood is its relatively complete set of Code Style guidelines and “Pythonic” idioms. Moreover, when a veteran Python developer (a Pythonista) points to portions of code and says they are not “Pythonic”, it usually means that these lines of code do not follow the common guidelines and fail to express the intent in what is considered the best (hear: most readable) way. On some border cases, no best way has been agreed upon on how to express an intent in Python code, but these cases are rare.

Python Examples On these pages, I have collected a bit of information about the Python programming language, along with a bunch of examples. These might be useful if you want to see some of the features without actually learning the language itself. You don't have to read through all of this in order. Just pick the pages which look most interesting to you. The topics are fairly independent from each other and don't require any existing knowledge about Python. Note: Some of the examples might require at least Python 2.3. Python beginner's mistakes Every Python programmer had to learn the language at one time, and started out as a beginner. Beginners make mistakes. This article highlights a few common mistakes, including some I made myself.