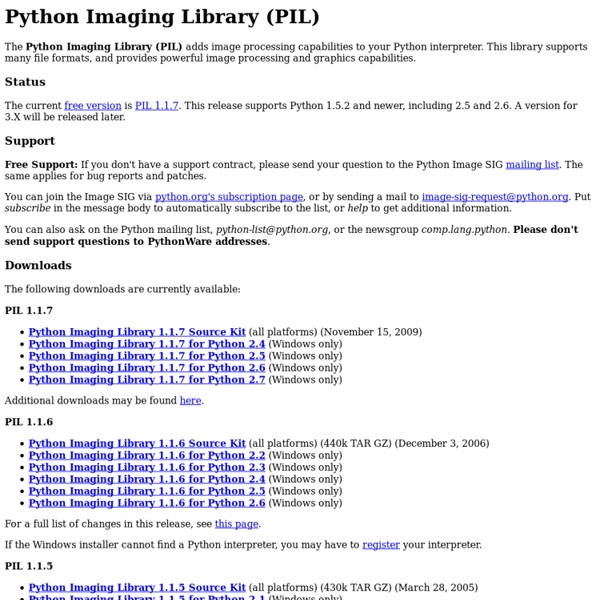 The Python Imaging Library (PIL) adds image processing capabilities to your Python interpreter. This library supports many file formats, and provides powerful image processing and graphics capabilities. Status The current free version is PIL 1.1.7. This release supports Python 1.5.2 and newer, including 2.5 and 2.6. A version for 3.X will be released later. Support Free Support: If you don't have a support contract, please send your question to the Python Image SIG mailing list. You can join the Image SIG via python.org's subscription page, or by sending a mail to image-sig-request@python.org. You can also ask on the Python mailing list, python-list@python.org, or the newsgroup comp.lang.python. Downloads The following downloads are currently available: Additional downloads may be found here. For a full list of changes in this release, see this page. If the Windows installer cannot find a Python interpreter, you may have to register your interpreter.

Python Morphology Toolbox Pymorph is a collection of pure python implementations of many image morphology functions. Mahotas Pymorph is still available and bug-free, but I am not adding any new features. Switch-case statement in Python « The ByteBaker This post is part of the Powerful Python series where I talk about features of the Python language that make the programmer’s job easier. The Powerful Python page contains links to more articles as well as a list of future articles. In the months since this was written, I have received a number of comments and learned more about programming languages in general.

HOWTO Install the MinGW (GCC) Compiler Suite Automated Installer If you are new to MinGW, see the MinGW Getting Started instructions to use the automated GUI or manual CLI (Command Line Interface) installers. What follows below are instructions for a very "manual" download, typically only attempted by more experienced users. Manual Installation Before you start this manual installation, read the release notes (at the bottom of the page). Determine which files below you need and download them. python-dateutil - Labix Description The dateutil module provides powerful extensions to the standard datetime module, available in Python 2.3+. News 2011-03-24 dateutil 2.0 is out! Ported to Python 3, by Brian Jones. If you need dateutil for Python 2.X, please continue using the 1.X series.

pymorph The pymorph Morphology Toolbox for Python is a powerful collection of latest state-of-the-art gray-scale morphological tools that can be applied to image segmentation, non-linear filtering, pattern recognition and image analysis. The pymorph Morphology Toolbox is an open source software for Morphological Image Analysis and Signal Processing written in Python. It is a companion resource for the book: Hands-on Morphological Image Processing , by Edward Dougherty and Roberto Lotufo, published by SPIE, Aug 2003, ISBN=0-8194-4720-X.

Python Extension Packages for Windows - Christoph Gohlke by Christoph Gohlke, Laboratory for Fluorescence Dynamics, University of California, Irvine. This page provides 32- and 64-bit Windows binaries of many scientific open-source extension packages for the official CPython distribution of the Python programming language. The files are unofficial (meaning: informal, unrecognized, personal, unsupported) and made available for testing and evaluation purposes. If downloads fail reload this page, enable JavaScript, disable download managers, disable proxies, clear cache, and use Firefox. Please only download files as needed. Parser Combinators Made Simple April 18, 2011 # Parsing theory has been around for quite a long time, but it is often thought of as magic by the swarms of people who haven't bothered to read about it, and see how plain and dry it actually is. Algorithms for parsing LR(k) grammars (meaning Left-to-right, Right-most derivation, k tokens lookahead) for instance, normally just traverse a state machine that was computed before hand (either by hand, or by using a parser generator such as bison or yacc).

PyGPU Haven't you ever dreamt of writing code in a very high level language and have that code execute at speeds rivaling that of lower-level languages? PyGPU is a compiler that lets you write image processing programs in Python that execute on the graphics processing unit (GPU) present in modern graphics cards. This enables image processing algorithms to take advantage of the performance of the GPU.