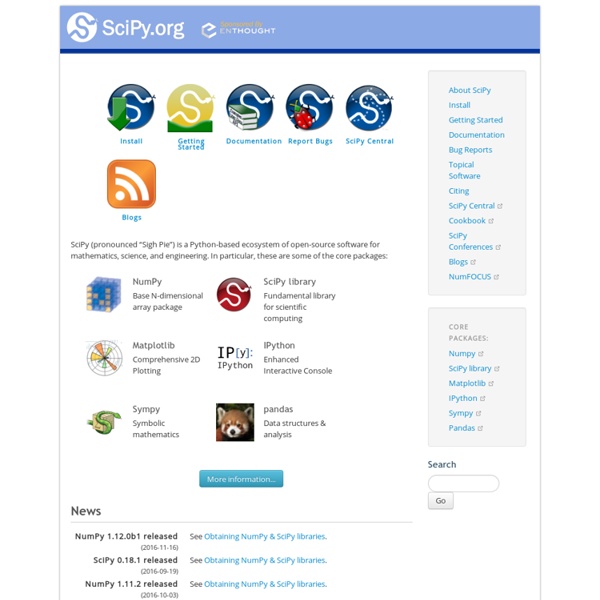 Programmer automates his job There's a hilarious project that's popular on GitHub, the website that hosts all kinds of software that programmers want to share with each other. The project was shared by a programmer named Nihad Abbasov, known as "Narkoz" on GitHub. It consists of a bunch of software scripts with some funny but NSFW names. Narkoz says that the scripts came from a another programmer. He tells the story like this: there was a programmer who left for another company, the type of guy that "if something — anything — requires more than 90 seconds of his time, he writes a script to automate that." After the guy left for a new job, his former coworkers were looking through his work and discovered that the guy had automated all sorts of crazy things, including parts of his job, his relationships, and making coffee.

Python for Scientists In reaction to several colleagues asking about Python , I thought a webpage would be more useful than giving an exhaustive rundown on Python verbally. Python is a script based language that allows programmers/scientists to get their algorithms and functions working in little or no time. A large number of modules and wrappers are being built for Python, like RPy and Scipy , to allow advanced tools and faster processing speeds to be implemented. Graphics with Matplotlib Matplotlib is a large and sophisticated graphics package for Python written in object oriented style. However, a layer built on top of this basic structure called pyplot accesses the underlying package using function calls. We describe a simple but useful subset of pyplot here.

NumPy v1.6 Manual Introduction There are 5 general mechanisms for creating arrays: Conversion from other Python structures (e.g., lists, tuples)Intrinsic numpy array array creation objects (e.g., arange, ones, zeros, etc.)Reading arrays from disk, either from standard or custom formatsCreating arrays from raw bytes through the use of strings or buffersUse of special library functions (e.g., random) This section will not cover means of replicating, joining, or otherwise expanding or mutating existing arrays. Nor will it cover creating object arrays or record arrays. Amit’s Game Programming Information What’s on this page? I’m interested in producing complexity out of simple parts. This page contains bookmarks that I collected while working on games; I did not write most of the content linked from here. As a result the set of links here reflects the types of things I needed to know: only a few specific topics (not everything related to game programming), general ideas instead of platform-specific information (graphics, sound, compilers), and ideas and designs instead of source code (I find it easier to go from an idea to code than from code to an idea).

The 2015 Opensource.com Reading List A decade of good books It's 2004. Google files its IPO. A group of undergrads launch something called "The Facebook" at Harvard University. Python/Unix Course Peter Shearer (x42260, pshearer@ucsd.edu) Website for class at We meet MWF from 10 to 10:50 in the IGPP Munk Lab Conference Room. There will be no final. Grades will be based on homework. To participate, you should install on a Mac:gfortran (64-bit version) (also see NetOps wiki) XCode: Macs Developer's environment.

NumPy for Matlab Users MATLAB® and !NumPy/!SciPy have a lot in common. But there are many differences. The Google Search Engine" Does Whatever a Spider Can and Hitting the Links A search engine spider does the search engine's grunt work: It scans Web pages and creates indexes of keywords. Once a spider has visited, scanned and categorized a page, it follows links from that page to other sites. The spider will continue to crawl from one site to the next, which means the search engine's index becomes more comprehensive and robust. To learn more about these programs, read How Search Engines Work.

2-Player Bartop Arcade Machine (Powered by Pi) The 'Galactic Starcade' is a DIY retro bartop arcade cabinet for two players. It is powered by the Raspberry Pi micro-computer and plays multiple types of retro games - primarily NES, SNES, Megadrive and arcade (MAME) games. Using a Pi keeps the cost, weight and complexity to a minimum but the cabinet could also house a more powerful PC-based system to play more modern games. I've always wanted an arcade machine for authentic retro gaming but they take up a lot of space and cost a lot of money. Making a custom bartop cabinet like this one solves both of those problems.