Step 2.1: Create a Deployment Package - AWS Lambda. From the Filter View list, choose the language you want to use for your Lambda function. 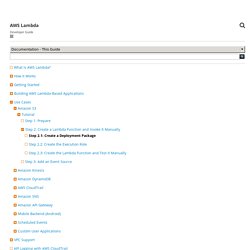 The appropriate section appears with code and specific instructions for creating a deployment package. The following is example Java code that reads incoming Amazon S3 events and creates a thumbnail. Note that it implements the RequestHandler interface provided in the aws-lambda-java-core library. Therefore, at the time you create a Lambda function you specify the class as the handler (that is, example.S3EventProcessorCreateThumbnail). For more information about using interfaces to provide a handler, see Leveraging Predefined Interfaces for Creating Handler (Java). The S3Event type that the handler uses as the input type is one of the predefined classes in the aws-lambda-java-events library that provides methods for you to easily read information from the incoming Amazon S3 event. 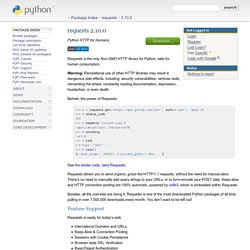 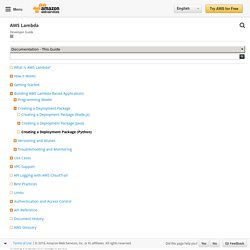 You can create a deployment package yourself or write your code directly in the Lambda console, in which case the console creates the deployment package for you and uploads it, creating your Lambda function. Note the following to determine if you can use the console to create your Lambda function: Simple scenario – If your custom code requires only the AWS SDK library, then you can use the inline editor in the AWS Lambda console. GitHub - sportarchive/aws-lambda-python-local: Run and Test locally, Dist and Deploy online your AWS Lambda Python functions with a simple Makefile. Deploy, Stage and Test you API Gateway calls too! Deploying a Flask Application to AWS Elastic Beanstalk - AWS Elastic Beanstalk. This tutorial walks through the deployment of a simple Flask website to an Elastic Beanstalk environment running Python 2.7. 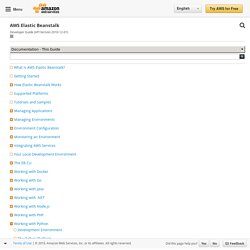 The tutorial uses the EB CLI as a deployment mechanism, but you can also use the AWS Management Console to deploy a ZIP file containing your project's contents. The EB CLI is an interactive command line interface written in Python that uses the Python SDK for AWS (boto). To use any Amazon Web Service (AWS), including Elastic Beanstalk, you need to have an AWS account and credentials. To learn more and to sign up, visit To follow this tutorial, you should have all of the Common Prerequisites for Python installed, including the following packages: Python 2.7pipvirtualenvawsebcli The Flask framework will be installed as part of the tutorial. Note. Common Steps for Deploying Python Applications - Elastic Beanstalk. AWS Elastic Beanstalk provides a consistent interface for deploying Python applications, so there are common procedures to follow regardless of the application framework you're using, or whether you're using one at all. 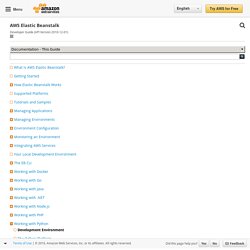 Important To use any Amazon Web Service (AWS), including Elastic Beanstalk, you need to have an AWS account and credentials. To learn more and to sign up, visit. Create an iPython HTML Notebook on Amazon's AWS Free Tier from scratch. What Roll your own iPython Notebook server with Amazon Web Services (EC2) using their Free Tier. 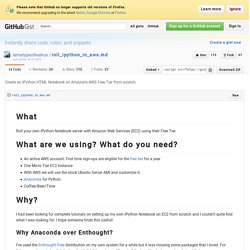 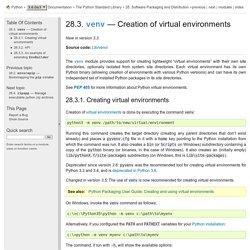 Each virtual environment has its own Python binary (allowing creation of environments with various Python versions) and can have its own independent set of installed Python packages in its site directories. Creation of virtual environments is done by executing the command venv: python3 -m venv /path/to/new/virtual/environment Running this command creates the target directory (creating any parent directories that don’t exist already) and places a pyvenv.cfg file in it with a home key pointing to the Python installation from which the command was run. It also creates a bin (or Scripts on Windows) subdirectory containing a copy of the python binary (or binaries, in the case of Windows). 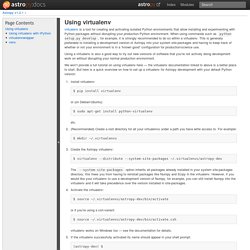 When using commands such as python setup.py develop, for example, it is strongly recommended to do so within a virtualenv. This is generally preferable to installing a development version of Astropy into your system site-packages and having to keep track of whether or not your environment is in a “known good” configuration for production/science use. Using a virtualenv is also a good way to try out new versions of software that you’re not actively doing development work on without disrupting your normal production environment. We won’t provide a full tutorial on using virtualenv here — the virtualenv documentation linked to above is a better place to start. Python virtual environments — Astropy v1.2.1.

If you plan to do regular work on astropy you should do your development in a python virtual environment. 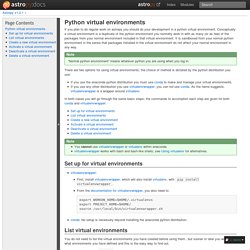