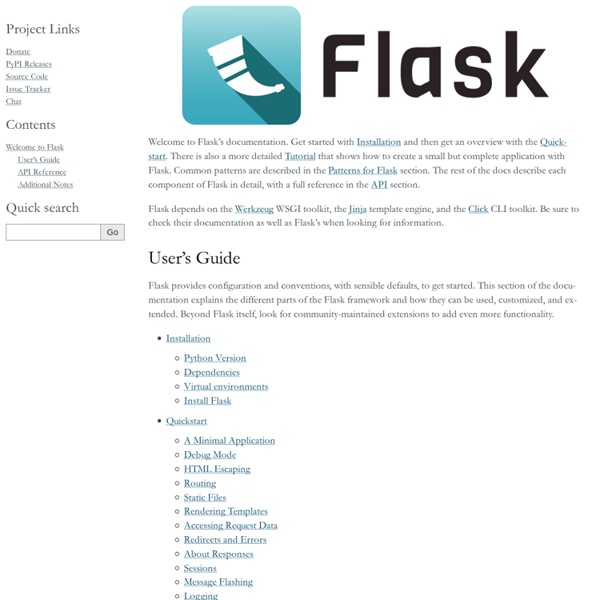 Welcome because sometimes a pocket knife is not enough overview // docs // community // snippets // extensions // search Flask is a microframework for Python based on Werkzeug, Jinja 2 and good intentions. And before you ask: It's BSD licensed! Latest Version: 0.10.1

An image sensor board based on Arduino Due and uCamII camera runs on Arduino Due/MEGA and Teensy3.2 with a uCamII camera support for IEEE 802.15.4 and long-range LoRaTM radios C. Pham, LIUPPA laboratory, University of Pau, France. last update: Apr 3rd, 2016. Introduction There are a number of image sensor boards available or proposed by the very active research community on image and visual sensors: Cyclops, MeshEyes, Citric, WiCa, SeedEyes, Panoptes, CMUcam3&FireFly, CMUcam4, CMUcam5/PIXY, iMote2/IMB400, ArduCam, ... The Flask Mega-Tutorial, Part VII: Unit Testing This is the seventh article in the series in which I document my experience writing web applications in Python using the Flask microframework. The goal of the tutorial series is to develop a decently featured microblogging application that demonstrating total lack of originality I have decided to call microblog. Here is an index of all the articles in the series that have been published to date: Recap In the previous chapters of this tutorial we were concentrating in adding functionality to our little application, a step at a time. By now we have a database enabled application that can register users, log them in and out and let them view and edit their profiles.

Python CGI Programming What is CGI? The Common Gateway Interface, or CGI, is a set of standards that define how information is exchanged between the web server and a custom script.The CGI specs are currently maintained by the NCSA and NCSA defines CGI is as follows:The Common Gateway Interface, or CGI, is a standard for external gateway programs to interface with information servers such as HTTP servers. The current version is CGI/1.1 and CGI/1.2 is under progress. Tutorial — Bottle 0.13-dev documentation This tutorial introduces you to the concepts and features of the Bottle web framework and covers basic and advanced topics alike. You can read it from start to end, or use it as a reference later on. The automatically generated API Reference may be interesting for you, too. It covers more details, but explains less than this tutorial. Solutions for the most common questions can be found in our Recipes collection or on the Frequently Asked Questions page. If you need any help, join our mailing list or visit us in our IRC channel.

blind-control This project is about electrically controlled roller shutters and motorized blinds. These are controlled with the Somfy RTS RF remote control system. In summer time, I like to automatically control the blinds such that they close if significant sun light would come insight and open again if direct sun light is over again. Since the blinds are located at different angles on different sides of the house I need individual control of the blinds, depending on their position. Also I want to maximize the opening time to have it as bright as possible insight.

Flask-Exceptional — Flask-Exceptional 0.5.2 documentation Flask-Exceptional adds Exceptional support to Flask. Exceptional tracks errors in your application, reports them real-time, and gathers the info you need to fix them fast. Visit to give it a try. Installation The remaining documentation assumes you have access to an Exceptional account. Installing the extension is simple with pip: An Introduction to Python’s Flask Framework Flask is a small and powerful web framework for Python. It's easy to learn and simple to use, enabling you to build your web app in a short amount of time. In this article, I'll show you how to build a simple website, containing two static pages with a small amount of dynamic content. While Flask can be used for building complex, database-driven websites, starting with mostly static pages will be useful to introduce a workflow, which we can then generalize to make more complex pages in the future. Upon completion, you'll be able to use this sequence of steps to jumpstart your next Flask app. Before getting started, we need to install Flask.

MicroPython pyboard [v1.1] ID: 2390 - $44.95 The pyboard is a compact and powerful electronics development board that runs MicroPython. It connects to your PC over USB, giving you a USB flash drive to save your Python scripts, and a serial Python prompt (a REPL) for instant programming. Works with Windows, Mac and Linux.MicroUSB cable not included, but you can pick one up from the store!MicroPython is a complete re-write of the Python (version 3.4) programming language so that it fits and runs on a microcontroller. It includes many optimisations so that it runs efficiently and uses very little RAM.MicroPython runs bare-metal on the pyboard, and essentially gives you a Python operating system.