Text Processing in Python (a book) 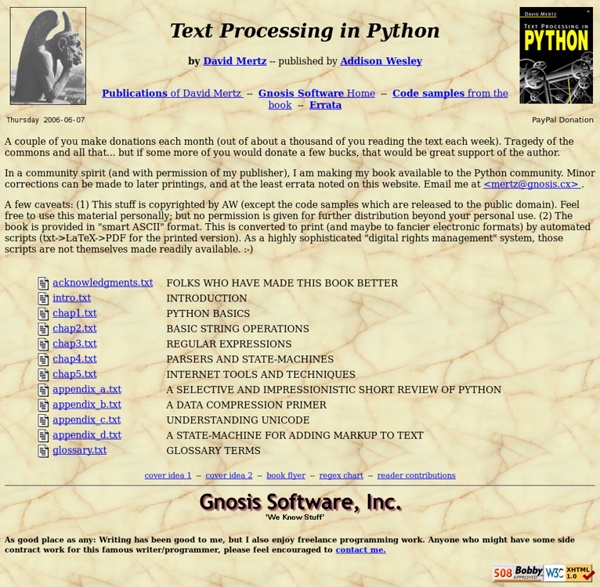 A couple of you make donations each month (out of about a thousand of you reading the text each week). Tragedy of the commons and all that... but if some more of you would donate a few bucks, that would be great support of the author. In a community spirit (and with permission of my publisher), I am making my book available to the Python community. Minor corrections can be made to later printings, and at the least errata noted on this website. Email me at <mertz@gnosis.cx> . A few caveats: (1) This stuff is copyrighted by AW (except the code samples which are released to the public domain).

PyDSTool PyDSTool is a sophisticated & integrated simulation and analysis environment for dynamical systems models of physical systems (ODEs, DAEs, maps, and hybrid systems). PyDSTool is platform independent, written primarily in Python with some underlying C and Fortran legacy code for fast solving. It makes extensive use of the numpy and scipy libraries. PyDSTool supports symbolic math, optimization, phase plane analysis, continuation and bifurcation analysis, data analysis, and other tools for modeling -- particularly for biological applications. The project is fully open source with a BSD license, and welcomes contributions from the community.

(Slightly) Advanced Python Topics Dave Kuhlman Email: dkuhlman@rexx.com Release 1.00June 6, 2003 Copyright (c) 2003 Dave Kuhlman introduction to python - Random stream This is the material which I use for teaching python to beginners. tld;dr: Very minimal explanation more code. Python? Interpreted languageMultiparadigm Introduction Think Complexity by Allen B. Downey Buy this book from Amazon.com. Download this book in PDF. The Art of Programming Programming and art can no longer be thought of as totally different worlds. They join each other as one in computer games, mobile apps, and software. 3D graphic arts and animated graphics give life to each game you play and each application you use. Computer graphic arts and modern programming are now interlaced as logic just is one with the creativity of geniuses.