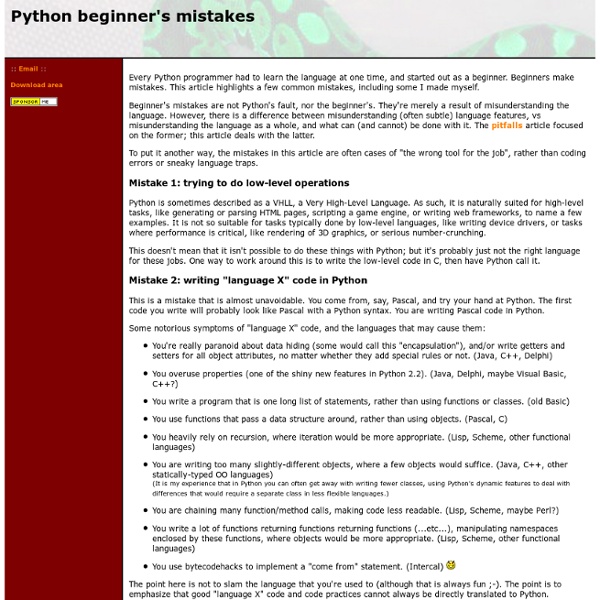 Every Python programmer had to learn the language at one time, and started out as a beginner. Beginners make mistakes. This article highlights a few common mistakes, including some I made myself. Beginner's mistakes are not Python's fault, nor the beginner's. They're merely a result of misunderstanding the language. However, there is a difference between misunderstanding (often subtle) language features, vs misunderstanding the language as a whole, and what can (and cannot) be done with it. To put it another way, the mistakes in this article are often cases of "the wrong tool for the job", rather than coding errors or sneaky language traps. Mistake 1: trying to do low-level operations Python is sometimes described as a VHLL, a Very High-Level Language. This doesn't mean that it isn't possible to do these things with Python; but it's probably just not the right language for these jobs. Mistake 2: writing "language X" code in Python This is a mistake that is almost unavoidable. Some advice

Learning with Python Navigation How to Think Like a Computer Scientist¶ Learning with Python¶ 2nd Edition (Using Python 2.x) by Jeffrey Elkner, Allen B. Downey, and Chris Meyers Software Carpentry The Problem Many scientists and engineers spend much of their lives writing, debugging, and maintaining software, but only a handful have ever been taught how to do this effectively: after a couple of introductory courses, they are left to rediscover (or reinvent) the rest of programming on their own. The result? Most spend far too much time wrestling with software when they'd rather be doing research, but still have no idea how reliable or efficient that software is. The Solution This site presents an intensive course on basic software development practices for scientists and engineers.

BeginnersGuide New to programming? Python is free and easy to learn if you know where to start! This guide will help you to get started quickly. Chinese Translation New to Python? BeginnersGuide/Programmers Please Note This is a Wiki page. Users with edit rights can edit it. You are therefore free to (in fact, encouraged to) add details of material that other Python users will find useful.

Learning to Program with Python Here we will use the python programming language to make a game of hangman, starting from scratch, working on a Macintosh. Python comes with OS X, so nothing special needs to be installed to follow along on your Mac. To use python on Windows, you can download and install python here. If you do not want to install python or you want to learn a newer and popular python-like language that runs in any modern browser, you can read Learning to Program with CoffeeScript, at davidbau.com/coffeescript. The Zen of Python Abstract Long time Pythoneer Tim Peters succinctly channels the BDFL's guiding principles for Python's design into 20 aphorisms, only 19 of which have been written down. The Zen of Python Beautiful is better than ugly.

10 Puzzle Websites to Sharpen Your Programming Skills Solving programming puzzles is a fun way to develop your logical and problem solving abilities. Also, when you’re familiarizing yourself with a new programming language, solving puzzles for that language can help speed up the learning process. Here are the top 10 popular programming puzzle sites that will help test your thinking and improve your programming, problem solving, and logical thinking skills. 1. Programming Praxis Style Guide for Python Code Code should be written in a way that does not disadvantage other implementations of Python (PyPy, Jython, IronPython, Cython, Psyco, and such).For example, do not rely on CPython's efficient implementation of in-place string concatenation for statements in the form a += b or a = a + b. This optimization is fragile even in CPython (it only works for some types) and isn't present at all in implementations that don't use refcounting. In performance sensitive parts of the library, the ''.join() form should be used instead.

The Hitchhikers Guide to Python! — pythonguide 0.0.1 documentation Greetings, Earthling! Welcome to The Hitchhiker’s Guide to Python. This is a living, breathing guide. If you’d like to contribute, fork us on GitHub! This handcrafted guide exists to provide both novice and expert Python developers a best practice handbook to the installation, configuration, and usage of Python on a daily basis. The Python Tutorial — Python v2.7.1 documentation Python is an easy to learn, powerful programming language. It has efficient high-level data structures and a simple but effective approach to object-oriented programming. Python’s elegant syntax and dynamic typing, together with its interpreted nature, make it an ideal language for scripting and rapid application development in many areas on most platforms. The Python interpreter and the extensive standard library are freely available in source or binary form for all major platforms from the Python web site, and may be freely distributed. The same site also contains distributions of and pointers to many free third party Python modules, programs and tools, and additional documentation. The Python interpreter is easily extended with new functions and data types implemented in C or C++ (or other languages callable from C).