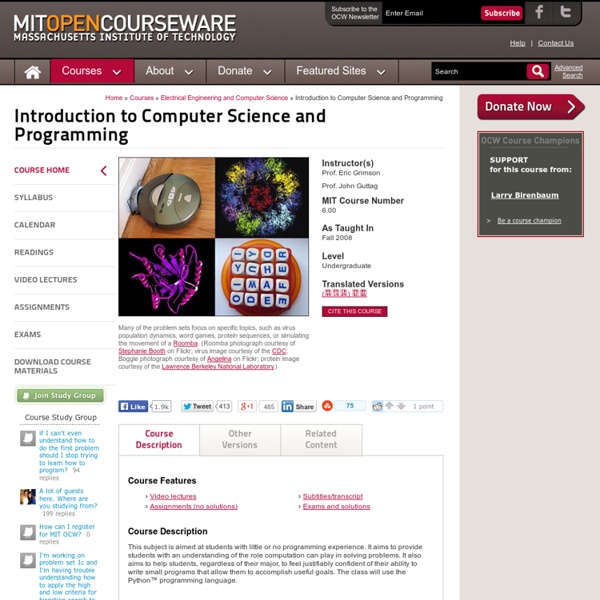 Electrical Engineering and Computer Science | 6.00 Introduction to Computer Science and Programming, Fall 2008 | Video Lectures The most learner-friendly resources about algorithms Learning How to Code Has Never Been Easier Programming isn’t just a niche specialization anymore, rather a necessity for tech-professionals regardless of the industry in which they work. Thankfully for them, it couldn’t be any easier.As such, there’s a big push lately to make coding literacy more widespread among the general populace. Even Mayor Bloomberg is getting in on the act, pledging to learn basic coding in 2012 as his New Year’s resolution. Codecademy Probably the most popular website at the moment for those looking to learn coding is Codecademy, a platform that emphasizes doing while learning. Treehouse Though it doesn’t have the name recognition of Codecademy just yet, Team Tree House is nevertheless a powerful way to learn coding. Code Year Rounding out the pack is Code Year, which is actually offered by the same folks behind Codecademy. Final Thoughts What are some of your favorite sites to learn coding from?

Dive Into Python Electrical Engineering and Computer Science | 6.00 Introduction to Computer Science and Programming, Fall 2008 | Video Lectures | 1: Introduction and Goals; Data Types, Operators, and Variables MIT OpenCourseWare - Free Courses Teach yourself to program We are entering the summer, the perfect time to improve yourself, you could go running or swimming, you could learn a new foreign language or perhaps you could learn to program. Self-learning is not as hard as it sounds, and it’s much easier than self-learning Spanish or French. There are really wonderful sources to start learning these new languages, understanding the concept behind programming and giving it a try with some interesting problems. Basic Programming Via XKCD To learn a new programming language, it’s much easier if you already know the concepts because you can start learning the new structures in no time. Programming Concepts : This is a brief tutorial for new programmers from the City University of New York. Learning a Language Whether you already know some programming languages or you are moving forward, you should choose a language to work with. Learning HTML Via Cyanide and Happiness HTML is quite a simple language that doesn't use variables or operations. Learning Python