Statsmodel. Learn python. Pandas. Embarrassingly parallel for loops — joblib 0.9.4 documentation. N_jobs: int, default: 1 The maximum number of concurrently running jobs, such as the number of Python worker processes when backend=”multiprocessing” or the size of the thread-pool when backend=”threading”. 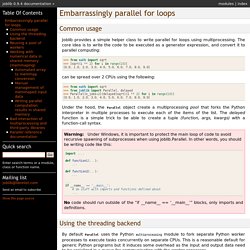 If -1 all CPUs are used. If 1 is given, no parallel computing code is used at all, which is useful for debugging. For n_jobs below -1, (n_cpus + 1 + n_jobs) are used. Thus for n_jobs = -2, all CPUs but one are used. backend: str or None, default: ‘multiprocessing’ Specify the parallelization backend implementation. “multiprocessing” used by default, can induce some communication and memory overhead when exchanging input and output data with the with the worker Python processes. verbose: int, optional The verbosity level: if non zero, progress messages are printed.

Pre_dispatch: {‘all’, integer, or expression, as in ‘3*n_jobs’} The number of batches (of tasks) to be pre-dispatched. Batch_size: int or ‘auto’, default: ‘auto’ Lda: Topic modeling with latent Dirichlet Allocation — lda 1.0.3 documentation. Introducing TPOT, the Data Science Assistant. Some of you might have been wondering what the heck I’ve been up to for the past few months. 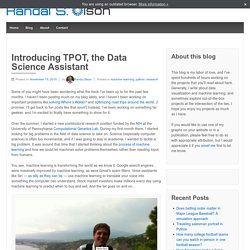 I haven’t been posting much on my blog lately, and I haven’t been working on important problems like solving Where’s Waldo? And optimizing road trips around the world. (I promise: I’ll get back to fun posts like that soon!) Instead, I’ve been working on something far geekier, and I’m excited to finally have something to show for it. Over the summer, I started a new postdoctoral research position funded by the NIH at the University of Pennsylvania Computational Genetics Lab. 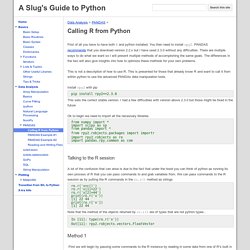 You then need to install . PANDAS that you download version 2.2.x but I have used 2.3.0 without any difficulties. There are multiple ways to do what we want so I will present multiple methods of accomplishing the same goals. The differences in the two will also give insights into how to optimize these methods for your own problems. This is not a description of how to use R. Install rpy2 with pip This sets the correct stable version. Ok to begin we need to import all the necessary libraries. from numpy import * import scipy as sp from pandas import * from rpy2.robjects.packages import importr import rpy2.robjects as ro import pandas.rpy.common as com Talking to the R session A lot of the confusion that can arise is due to the fact that under the hood you can think of python as running its own process of R that you can pass commands to and grab variables from. 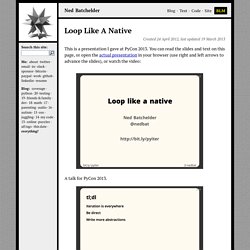 You can read the slides and text on this page, or open the actual presentation in your browser (use right and left arrows to advance the slides), or watch the video: A talk for PyCon 2013. This talk is billed as Beginner, and sounds like a beginner topic, but I prefer to think of it as Fundamental. Plenty of expert Python programmers aren’t making enough use of the tools I’m going to talk about. Python has a nice model of abstract iteration which can be used to increase the expressiveness of your programs. My goal here is to show Python iteration in a light that would encourage programmers to explore more of its possibilities. All programs iterate over data, of various sorts. Let’s say you have a list of numbers, and you want to print each of them.

This while loop works, and is a least common denominator: this way of thinking about the loop can be written in almost any language.