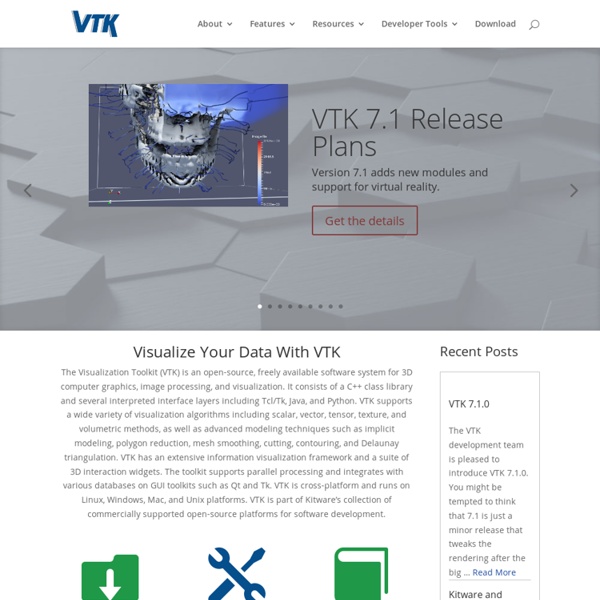 Visvis_basics - visvis - A short introduction to visvis - The object oriented approach to visualization. Introduction Visvis is a pure Python library for visualization of 1D to 4D data in an object oriented way. Essentially, visvis is an object oriented layer of Python on top of OpenGl, thereby combining the power of OpenGl with the usability of Python. A Matlab-like interface in the form of a set of functions allows easy creation of objects (e.g. plot(), imshow(), volshow(), surf()). Visvis shares quite a bit of functionality with both Matplotlib and Mayavi. Object oriented design Visvis has a strong object oriented design and employs a parental structure. An important wibject is the Axes class: it represents a scene in "world coordinates", that is looked upon with one of the different camera types, and can be interacted with with the mouse. Multiple world-objects (or Wobjects) can easily be inserted in the scene by making them a child of the axes object. All Wibjects and Wobjects have various properties that can be modified to change their behavior and appearance. Naming conventions

glumpy - Fast OpenGL numpy visualization glumpy is a small python library for the rapid vizualization of numpy arrays, (mainly two dimensional) that has been designed with efficiency in mind. If you want to draw nice figures for inclusion in a scientific article, you’d better use matplotlib. If you want to have a sense of what’s going on in your simulation while it is running, then maybe glumpy can help you. Dependencies glumpy is made on top of PyOpenGL ( and since glumpy is dedicated to numpy visualization, you obviously need numpy ( Some demos require matplotlib ( and scipy ( as well but this is optional. Finally, atb demos require the AntTweakBar library available from Mailing lists The main forum for glumpy discussion is the glumpy-users mailing list. Example usage demo-simple.py import numpy, glumpy glumpy.show() Histrogram-like display: Simple mesh viewer:

PyQtGraph - Scientific Graphics and GUI Library for Python Processing.org Python 3D Software A small collection (94 packages) of pointers to Python software for working in three dimensions "Open Source" of some type Batch converter from CAD files to Acrobat 3D-PDF Site is in German. Don't know what type of CAD documents are being converted. Unknown Pygame GUI Library compatible with OpenGL Derived from a number of PyWeek entries, provides buttons, list-controls, layout tools, file dialogs, and other assorted "GUI" bits for use with Pygame-based games. GUI for editing files for the Yafray raytracer XML-editing GUI for tweaking Yafray data-files. 3D Modeler with Python scripting support Full-featured tool with a rather non-standard interface (for those accustomed to main-line tools such as 3DSMax or Maya). Editor for BZFlag game files 2D Rendering engine for a variety of back-ends including OpenGL Kiva and Chaco were, at one point, part of SciPy, but they appear to have been dropped at some point. Free-for-non-commercial Molecular modelling framework Small GLUT + OpenGL C-python library