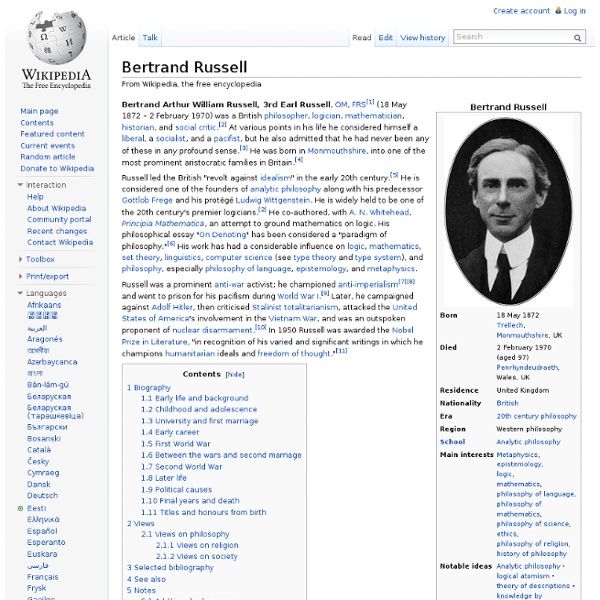 Russell led the British "revolt against idealism" in the early 20th century.[58] He is considered one of the founders of analytic philosophy along with his predecessor Gottlob Frege, colleague G. E. Moore, and his protégé Ludwig Wittgenstein. He is widely held to be one of the 20th century's premier logicians.[55] With A. N. Whitehead he wrote Principia Mathematica, an attempt to create a logical basis for mathematics. Russell was a prominent anti-war activist; he championed anti-imperialism[60][61] and went to prison for his pacifism during World War I.[62] Later, he campaigned against Adolf Hitler, then criticised Stalinist totalitarianism, attacked the involvement of the United States in the Vietnam War, and was an outspoken proponent of nuclear disarmament.[63] In 1950 Russell was awarded the Nobel Prize in Literature "in recognition of his varied and significant writings in which he champions humanitarian ideals and freedom of thought Biography Early life and background Early career

Nikolai Berdyaev Berdyaev's grave, Clamart (France). Nikolai Alexandrovich Berdyaev (/bərˈdjɑːjɛf, -jɛv/;[1] Russian: Никола́й Алекса́ндрович Бердя́ев; March 18 [O.S. March 6] 1874 – March 24, 1948) was a Russian political and also Christian religious philosopher who emphasized the existential spiritual significance of human freedom and the human person. Bertrand Russell 1. Russell’s Chronology A short chronology of the major events in Russell’s life is as follows: Attempts to sum up Russell’s life have been numerous. One of the more famous comes from the Oxford philosopher A.J. Aporia In philosophy, an aporia (Ancient Greek: ᾰ̓πορῐ́ᾱ, romanized: aporíā, lit. 'impasse, difficulty in passage, lack of resources, puzzlement') is a puzzle or state of puzzlement. In rhetoric, it is a declaration of doubt, made for rhetorical purpose and often feigned. Definitions[edit]

Alfred Korzybski Alfred Habdank Skarbek Korzybski ([kɔˈʐɨpski]; July 3, 1879 – March 1, 1950) was a Polish-American independent scholar who developed a field called general semantics, which he viewed as both distinct from, and more encompassing than, the field of semantics. He argued that human knowledge of the world is limited both by the human nervous system and the languages humans have developed, and thus no one can have direct access to reality, given that the most we can know is that which is filtered through the brain's responses to reality. His best known dictum is "The map is not the territory". Early life and career[edit] Korzybski was educated at the Warsaw University of Technology in engineering.

Biography, Essays, Philosophy, & Facts Bertrand Russell, in full Bertrand Arthur William Russell, 3rd Earl Russell of Kingston Russell, Viscount Amberley of Amberley and of Ardsalla, (born May 18, 1872, Trelleck, Monmouthshire, Wales—died February 2, 1970, Penrhyndeudraeth, Merioneth), British philosopher, logician, and social reformer, founding figure in the analytic movement in Anglo-American philosophy, and recipient of the Nobel Prize for Literature in 1950. Russell’s contributions to logic, epistemology, and the philosophy of mathematics established him as one of the foremost philosophers of the 20th century. To the general public, however, he was best known as a campaigner for peace and as a popular writer on social, political, and moral subjects.

Thrasymachus Life, date, and career[edit] Aristophanes makes what is the most precisely dateable of references to Thrasymachus, in a passing joke from a lost play dated to 427 BCE.[1] Nils Rauhut of the Internet Encyclopedia of Philosophy concludes from this passage that Thrasymachus must have been teaching in Athens for several years before this point.[2] A fragment from Clement of Alexandria provides some further context by contrasting Thrasymachus with the Macedonian Archelaus. "And while Euripides says in the Telephus, 'Shall we who are Greeks be slaves to barbarians?', Thrasymachus says in his speech For the People of Larisa, 'Shall we become slaves to Archelaus, Greeks as we are, to a barbarian?'"

Victor Kandinsky Victor Khrisanfovich Kandinsky (Russian: Виктор Хрисанфович Кандинский) (April 6, 1849, Byankino, Nerchinsky District, Siberia – July 3, 1889, Saint Petersburg) was a Russian psychiatrist, and was 2nd cousin to famed artist Wassily Kandinsky.[1] He was born in Siberia into a large family of extremely wealthy businessmen.[2] Victor Kandinsky was one of the famous figures in Russian psychiatry and most notable for his contributions to the understanding of hallucinations.[3] Biography[edit] He graduated from Moscow Imperial University Medical School in 1872 and started to work as a general practitioner in one of the hospitals in Moscow.[4]

John Stuart Mill John Stuart Mill (20 May 1806 – 7 May 1873),[8] usually cited as J. S. Mill, was a British philosopher, political economist, and civil servant. Cephalus Cephalus (; Ancient Greek: Κέφαλος Kephalos means "head"[citation needed]) is a name, used both for the hero-figure in Greek mythology and carried as a theophoric name by historical persons. Mythological Historical See also[edit] Thomas Carlyle Scottish historian, satirical writer, essayist, philosopher and teacher Thomas Carlyle (4 December 1795 – 5 February 1881) was a Scottish historian, satirical writer, essayist, translator, philosopher, mathematician, and teacher.[1] Considered one of the most important social commentators of his time, he presented many lectures during his lifetime with certain acclaim in the Victorian era. One of those conferences resulted in his famous work On Heroes, Hero-Worship, and The Heroic in History where he argued that the key role in history lies in the actions of the "Great Man", claiming that "the history of the world is but the biography of great men".[2] A respected historian, his 1837 book The French Revolution: A History was the inspiration for Charles Dickens' 1859 novel A Tale of Two Cities, and remains popular today.