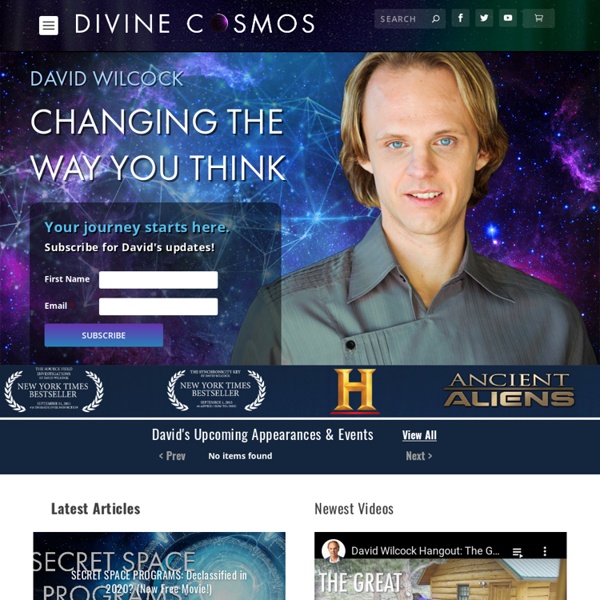 GrahamHancock.com I don't want GRAHAMHANCOCK.COM to be exclusively a Graham Hancock site, but a place where ideas and perspectives on the past can be put forward and discussed by other writers and researchers as well -- and indeed by anyone with something interesting to say and the ability to say it. Accordingly I'm offering this section of the site as a FORUM for the excellent writing and thought-provoking ideas of others. I offer no set guidelines as to what is or is not "relevant". If you think that a piece of your own original writing would fit in well in these pages then please submit it to me for consideration.

The 37th Parallel a UFO Highway? Opemmindstv explains, “Ex-Deputy Sherriff Chuck Zukoswki has spent 25 years investigating mysterious phenomena across America. From his extensive research he’s spotted an alarming pattern – a growing list of eye-witness UFO reports along a 3,000 mile stretch through the heart of America. This stretch of UFO sightings corresponds with the 37th degree parallel, and Chuck has noticed that a number of military bases, including the famous Area 51, exist on the same parallel.

David Icke Headlines ‘After remaining silent for days, Nevada Sen. Harry Reid made comments regarding the ongoing dispute between the Bureau of Land Management and rancher Cliven Bundy today, accusing the Bundy family of violating the law. “Well, it’s not over. We can’t have an American people that violate the law and then just walk away from it. So it’s not over,” Reid told News 4. Despite telling the Bundy family that a deal had been reached Saturday after federal agents were forced to retreat, the BLM reversed its promise Monday and told reporters that they planned to go after Bundy “administratively and judicially.”

Philadelphia Experiment from A-Z You are visitor to this page Thanks for all the interest and comments, I am currently trying to respond to all letters received! To jump to a specific section of this page select below Last Updated: Wednesday, July 24, 2013 03:29:36 PM The following information and Images is ©1995~2008, Andrew H. New Age Spirituality New Age, also referred to as the New Age movement or New Age Spirituality, is a spiritual movement whose purpose is to seek the Universal Truth, and for each human to reach its highest potential. The term 'New Age' was used as early as 1809, in an epic poem called 'Milton a Poem', written and illustrated by William Blake, while the elements of today's New Age first started appearing in the 1900s in metaphysical spiritual movements such as Theosophy, Spiritualism or New Thought. In the words of Deepak Chopra, the New Age Supersage*: "When your truth is aligned with the Truth of universal consciousness, you are living your dharma...living a blissful existence. You are "surfing the wave of Truth" - letting it propel you into the next phase of your life while it delivers the thrill of the present moment." New Age rejects religious doctrine and dogma. New Age Teachings

Clifford Stone - UFO Researchers & People Clifford Stone Clifford Stone is unique among those experiencing and investigating UFO and ET phenomenon. He spent 22 years in the US Army as a part of an extremely elite and secret group that was rapidly dispatched to crash sites in order to recover UFO or ET craft, bodies, and artifacts. 7 new Earth-like exoplanets discovered, NASA announces Talk about lucky number seven. Astronomers have discovered not one, not two, but seven Earth-sized planets orbiting a star called TRAPPIST-1. What’s more, three of them are in the habitable zone— the happy place where liquid water can exist on the surface of rocky planets, as it’s not too hot or cold.

The Power of the Chakras The following is excerpted from Spiritual Clearings: Sacred Practices to Release Negative Energy and Harmonize Your Life (North Atlantic Books 2009) Chakra Assessments The word chakra means "wheel" in Sanskrit. Chakras are the body's subtle energy vortices. They have been identified in many ancient cultures. Raymond Fowler Dan Boudillion: Ray, with 5 books on the Andreasson affair, you and your name have become inexorably linked with it. I find it suggestive that in the end the same thread of buried contact memories may have run a parallel course through your life as well. Are your and Betty Andreasson Luca’s experiences linked at some deeper level beyond coincidence? If so, what do you think its all about and where do you think its all going? Dan Boudillion Ray Fowler: I don’t know.

Alien Earths: why life on other worlds would be far weirder than us - The Verge Last month, the American Astronomical Society's 223rd meeting featured the announcement of a few breakthroughs: Using the Kepler space observatory, researchers had discovered a planet roughly the mass of Earth orbiting a star beyond our solar system, and with the Hubble telescope they had provided the first detailed look at the weather of a "super Earth" — a planet larger than ours but smaller than Neptune — in our galactic neighborhood. Astronomers found that GJ 1214b, like much of the Earth on any given day, is cloudy. These similarities to Earth are tantalizing. But despite them, these planets' respective solar systems look nothing like our own. Rather than circling a big, hot, yellow sun like ours, they spin around small, cool, red stars called red dwarfs. Kind of like Krypton.

The Gralien Report » UFOs Much has been written about Admiral Byrd’s alleged discovery of Nazi tech in Antarctica… but perhaps there is more myth inferred here than actual evidence found. Continue reading Chasing the origins of the term “Singularity” in modern usage, similar ideas were expressed early on by computer scientist Jacques Vallee… but not how you might think. Continue reading I was recently interviewed by April Holloway for the Ancient Origins website about skepticism, UFO coverups, misinformation, and a variety of other subjects.