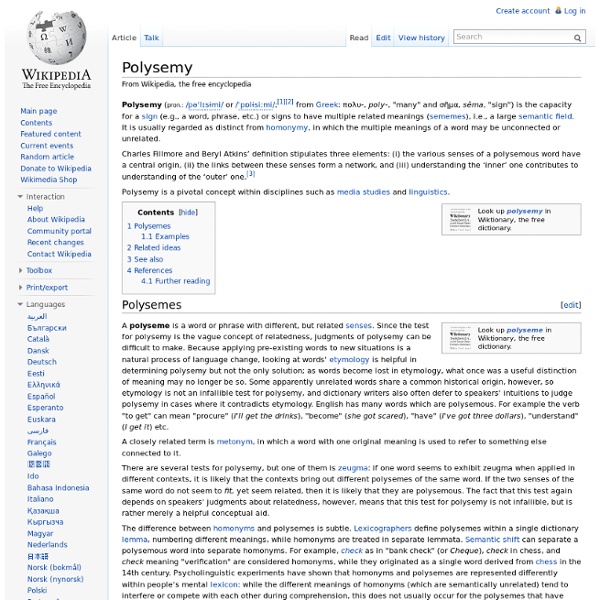 Charles Fillmore and Beryl Atkins’ definition stipulates three elements: (i) the various senses of a polysemous word have a central origin, (ii) the links between these senses form a network, and (iii) understanding the ‘inner’ one contributes to understanding of the ‘outer’ one.[3] Polysemy is a pivotal concept within disciplines such as media studies and linguistics. Polysemes[edit] A polyseme is a word or phrase with different, but related senses. In vertical polysemy a word refers to a member of a subcategory (e.g., 'dog' for 'male dog').[4] A closely related idea is metonym, in which a word with one original meaning is used to refer to something else connected to it. There are several tests for polysemy, but one of them is zeugma: if one word seems to exhibit zeugma when applied in different contexts, it is likely that the contexts bring out different polysemes of the same word. Examples[edit] Man Mole Bank However: a river bank is a homonym to 1 and 2, as they do not share etymologies.

Slapstick Slapstick is the recurse to humor involving exaggerated physical activity which exceeds the boundaries of common sense.[1][2][3] Origins[edit] History[edit] See also[edit] References[edit] External links[edit] "What's the Origin of Slapstick?" Metonymy For instance, "Hollywood" is used as a metonym for the U.S. film industry because of the fame and cultural identity of Hollywood, a district of the city of Los Angeles, California, as the historical center of film studios and film stars.[4] The national capital is often used to represent the government of a country, such as "Westminster" for Parliament of the United Kingdom, "Ottawa" for Parliament of Canada, or "Washington" for United States government.[5] Metonymy and related figures of speech are common in everyday talk and writing. Synecdoche and metalepsis are considered specific types of metonymy. Polysemy, multiple meanings of a single word or phrase, sometimes results from relations of metonymy. Both metonymy and metaphor involve the substitution of one term for another.[6] In metaphor, this substitution is based on some specific analogy between two things, whereas in metonymy the substitution is based on some understood association or contiguity.[7][8] Examples[edit] Notes[edit]

Pun The pun, also called paronomasia, is a form of word play that suggests two or more meanings, by exploiting multiple meanings of words, or of similar-sounding words, for an intended humorous or rhetorical effect.[1][2] These ambiguities can arise from the intentional use of homophonic, homographic, metonymic, or metaphorical language. A pun differs from a malapropism in that a malapropism uses an incorrect expression that alludes to another (usually correct) expression, but a pun uses a correct expression that alludes to another (sometimes correct but more often absurdly humorous) expression. Puns are used to create humor and sometimes require a large vocabulary to understand. Puns have long been used by comedy writers, such as William Shakespeare, Oscar Wilde, and George Carlin. Typology[edit] Puns can be classified in various ways: The homophonic pun, a common type, uses word pairs which sound alike (homophones) but are not synonymous. Customer: "I'd like a Caesar salad." Use[edit] Dr.

Malapropism The word malapropism comes ultimately from the French mal à propos meaning "inappropriate" via "Mrs. Malaprop", a character in the Richard Brinsley Sheridan comedy The Rivals (1775) who habitually misused her words.[2] Dogberryism comes from "Officer Dogberry", the name of a character in the William Shakespeare play Much Ado About Nothing. These are the two best-known fictional characters who made this kind of error—there are many other examples. Malapropisms also occur as errors in natural speech. Malapropisms are often the subject of media attention, especially when made by politicians or other prominent individuals. Etymology[edit] The word "malapropism" (and its earlier variant, "malaprop") comes from a character named "Mrs. The synonymous term "Dogberryism" comes from the 1598 Shakespearean play Much Ado About Nothing, in which the character Dogberry utters many malapropisms to humorous effect.[5][6] Distinguishing features[edit] Examples from fiction[edit] The fictional Mrs.

Spoonerism Caricature of Charles H. Workman. Caption reads "Through every passion raging". Most Spoonerims were not invented by Reverend William A. Etymology[edit] It is named after the Reverend William Archibald Spooner (1844–1930), Warden of New College, Oxford, who was notoriously prone to this mistake.[3][4] The term 'Spoonerism' was well established by 1921. "The boys of Aldro School, Eastbourne, [...] have been set the following task for the holidays: Discover and write down something about: The Old Lady of Threadneedle-street, a Spoonerism, a Busman's Holiday In 1937 The Times quoted a detective describing a man as "a bricklabourer's layer" and used "Police Court Spoonerism" as the headline.[6] A spoonerism is also known as a marrowsky, purportedly after a Polish count who suffered from the same impediment.[7] Examples[edit] "Three cheers for our queer old dean!" A newspaper column[4] attributes this additional example to Spooner: "A nosey little cook." Popular use[edit] Poetry[edit] Comedian F.

Comedic device List of comedic devices[edit] Repetition[edit] Hyperbole, or Overstatement[edit] Hyperbole, an overstatement, is a figure of speech in which statements are exaggerated or extravagant. Understatement[edit] An understatement is a figure of speech in which statements are purposely understated. Double entendre[edit] A double entendre is a spoken phrase that can be understood in either of two ways. Pun[edit] A pun consists of a deliberate confusion of similar words or phrases for humorous effect, whether humorous or serious. Juxtaposition[edit] Juxtaposition is a literary technique which causes the audience to compare two elements simply because they are placed next to each other. Mistaken identity[edit] Taboo[edit] There is a liberating element to saying something that nobody else would say in a civilised environment. Slapstick[edit] Slapstick is a type of comedy involving exaggerated physical violence. See also[edit] External links[edit]

Eggcorn In linguistics, an eggcorn is an idiosyncratic substitution of a word or phrase for a word or words that sound similar or identical in the speaker's dialect (sometimes called oronyms). The new phrase introduces a meaning that is different from the original, but plausible in the same context, such as "old-timers' disease" for "Alzheimer's disease".[1] This is as opposed to a malapropism, where the substitution creates a nonsensical phrase. Classical malapropisms generally derive their comic effect from the fault of the user, while eggcorns are errors that exhibit creativity or logic.[2] Eggcorns often involve replacing an unfamiliar, archaic, or obscure word with a more common or modern word ("baited breath" for "bated breath").[3] Examples[edit] ex-patriot instead of expatriate[5]mating name instead of maiden name[6]on the spurt of the moment instead of on the spur of the moment[2]preying mantis instead of praying mantis[7] See also[edit] References[edit] Further reading[edit]

Isolating language A closely related concept is the analytic language, which in the extreme case does not use any inflections to indicate grammatical relationships (but which may still form compound words or may change the meanings of individual words with derivational morphemes, either of which processes gives more than one morpheme per word). Isolating languages are in contrast to synthetic languages, where words often consist of multiple morphemes.[1] That linguistic classification is subdivided into the classifications fusional, agglutinative, and polysynthetic, which are based on how the morphemes are combined. Explanation[edit] Although historically languages were divided into three basic types (isolating, flectional, agglutinative), these traditional morphological types can be categorized by two distinct parameters: A language can be said to be more isolating than another if its correspondence between word and number of morphemes approaches 1:1 more than the other one. See also[edit] References[edit]

Capitonym A capitonym is a word that changes its meaning (and sometimes pronunciation) when it is capitalized; the capitalization usually applies due to one form being a proper noun or eponym.[citation needed] It is a portmanteau of the word capital with the suffix -onym. A capitonym is a form of homograph and – when the two forms are pronounced differently – also of heteronym. Although some pairs, such as march and March, are completely unrelated, in other cases, such as august and catholic, the capitalized form is a name that is etymologically related to the uncapitalized form. Capital letters may be used to differentiate between a set of objects, and a particular example of that object. In English[edit] Philosophical, religious, and political terms[edit] A particular example of where capitonyms are prominent is in terminology relating to philosophy, religion, and politics. Words for transcendent ideas in the Platonic sense are often capitalized, especially when used in a religious context.

Garden path sentence According to one current psycholinguistic theory, as a person reads a garden path sentence, the reader builds up a structure of meaning one word at a time. At some point, it becomes clear to the reader that the next word or phrase cannot be incorporated into the structure built up thus far; it is inconsistent with the path down which they have been led. Garden path sentences are less common in spoken communication because the prosodic qualities of speech (such as the stress and the tone of voice) often serve to resolve ambiguities in the written text. Examples[edit] Garden path sentences can be either simple or complex. Simple[edit] A second phrase can cause the reinterpretation of meaning (see paraprosdokian): Time flies like an arrow; fruit flies like a banana. Complex[edit] The horse raced past the barn fell. The reader usually starts to parse this as a basic noun phrase plus ordinary active intransitive verb plus "past the barn", but stumbles when reaching the word "fell". Parsing[edit]

Liberal welfare reforms David Lloyd George was one of the 'New Liberals' who passed welfare legislation During the 1906 General Election campaign neither of the two major parties made poverty an important election issue and no promises were made to introduce welfare reforms. Despite this, the Liberals led by Henry Campbell-Bannerman and later Herbert Asquith won a landslide victory and began introducing wide ranging reforms as soon as they took office.[3] Causes[edit] Previous social legislation[edit] The Conservative government in office before the Liberals came to power passed the Unemployed Workman's Act in 1905 and the Employment of Children Act in 1905. Liberal reforms 1906–1914[edit] Children[edit] In 1906, children were provided with free school meals. In 1907, the number of free scholarship places in secondary schools was increased. Elderly[edit] In 1908, pensions were introduced for those over 70. Workers[edit] Health Insurance[edit] Unemployment insurance[edit] Agriculture[edit] Reforms after 1910[edit]

Word play Word play or wordplay[1] is a literary technique and a form of wit in which the words that are used become the main subject of the work, primarily for the purpose of intended effect or amusement. Examples of word play include puns, phonetic mix-ups such as spoonerisms, obscure words and meanings, clever rhetorical excursions, oddly formed sentences, double entendres, and telling character names (such as in the play The Importance of Being Earnest, Ernest being a given name that sounds exactly like the adjective earnest). Word play is quite common in oral cultures as a method of reinforcing meaning. Examples of visual orthographic and sound-based word play abound in both alphabetically and non-alphabetically written literature (e.g. Chinese). Techniques[edit] Some techniques often used in word play include interpreting idioms literally and creating contradictions and redundancies, as in Tom Swifties: "Hurry up and get to the back of the ship," Tom said sternly. Examples[edit] But 'Bun' would.