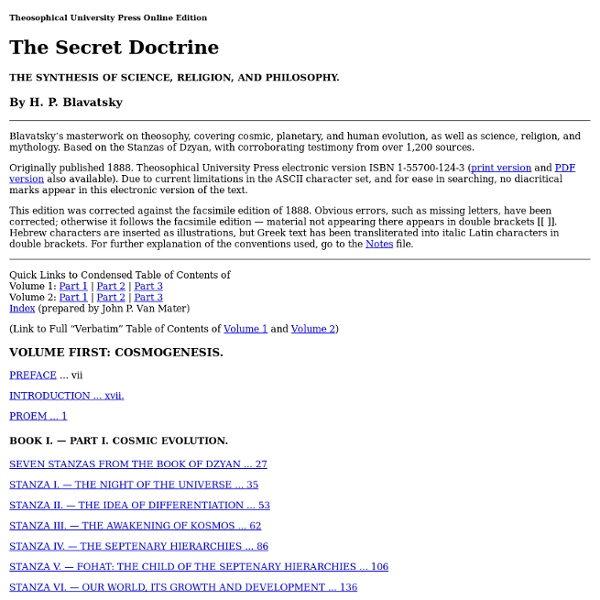 Theosophical University Press Online Edition By H. P. Blavatsky’s masterwork on theosophy, covering cosmic, planetary, and human evolution, as well as science, religion, and mythology. Originally published 1888. This edition was corrected against the facsimile edition of 1888. Quick Links to Condensed Table of Contents of Volume 1: Part 1 | Part 2 | Part 3 Volume 2: Part 1 | Part 2 | Part 3Index (prepared by John P. (Link to Full “Verbatim” Table of Contents of Volume 1 and Volume 2) PREFACE ... vii INTRODUCTION ... xvii. (continued in) Formation of Man: the Thinker ... 238 STANZA X. — Continued ... 271 (continued in) The Origin of the Satanic Myth ... 378 Western Speculations founded on the Greek and Puranic Traditions ... 402 (continued in) The many meanings of the “War in Heaven” ... 492 (continued in) The Septenary Element in the Vedas ... 605 The Seven Souls of the Egyptologists ... 630 (continued in) (c) Esoteric Geological Chronology ... 709 Index [[As prepared by John P. TUP Online Menu Related:  Luciferian/Satanic

Types of Satanism - LaVeyan Satanism, Theistic Satanism and Luciferianism Luciferians Many see Luciferianism as another branch of Satanism (and generally a theistic branch, although there are some who see Lucifer as symbolic rather than an actual being). However, Luciferians see themselves as a separate religion. Luciferians use the term "Lucifer" in its literal sense: "lightbringer" in Latin. He does not, however, present his gifts to everyone. Luciferians also stress the balance of light and dark and that each depends upon the other. Urantia Book | Urantia Foundation | Custodian and Publisher of The Urantia Book since 1955 OZ: Liber LXXVII "the law of the strong: this is our law and the joy of the world." —AL. II. 21 "Do what thou wilt shall be the whole of the Law." —AL. "thou hast no right but to do thy will. "Every man and every woman is a star." There is no god but man. 1. to live in the way that he wills to do: to work as he will: to play as he will: to rest as he will: to die when and how he will. 2. to drink what he will: to dwell where he will: to move as he will on the face of the earth. 3. to speak what he will: to write what he will: to draw, paint, carve, etch, mould, build as he will: to dress as he will. 4. "take your fill and will of love as ye will, when, where, and with whom ye will." 5. "the slaves shall serve." "Love is the law, love under will."

Ύπατο Συμβούλιο των Ελλήνων Εθνικών The Libri of Aleister Crowley Aleister Crowley (Oct. 12, 1875–Dec. 1, 1947) – however one judges him – was a fascinating man who lived an amazing life. He is best known as being an infamous occultist and the scribe of The Book of the Law, which introduced Thelema to the world. Crowley was an influential member in several occult organizations, including the Golden Dawn, the A∴A∴, and Ordo Templi Orientis. He was a prolific writer and poet, a world traveler, mountaineer, chess master, artist, yogi, social provocateur, drug addict and sexual libertine. The press loved to demonize him and dubbed Crowley “The wickedest man in the world.” — From “Aleister Crowley” on Thelemapedia See also: Θέλημα – Thelema There are so many documents on the site related to the Thelema of Aleister Crowley that it can sometimes be difficult to know where to start, so here are a few first steps Centres of Pestilence Commentaries on Liber AL vel Legis, The Book of the Law, by various authors Aleister Crowley Books Aleister Crowley books at Amazon

Western Philosophy - Mind Map Official Church of Satan Website Ordo Templi Orientis History - Bill Heidrick Ordo Templi Orientis was founded before 1902 e.v. by Karl Kellner and Theodore Reuss (also known as Merlin) in Germany, with a principal mailing address in Lugano, Switzerland by 1917 e.v. The immediate precursor organization was the Hermetic Brotherhood of Light, a mystical society founded in the mid 19th century, with branches in Europe and North America. Prior to the Hermetic Brotherhood of Light, O.T.O. "traditional" history includes the Weishaupt Illuminati of the late 18th century and the Crusading Order of Knights Templar of the 11th century as precursors. It must be pointed out that many other organizations also claim derivation from the Illuminati and 11th century Templars, without actual evidence. "Traditional" history is a euphemism for "mythology" in Masonic and mystical organizations; and, as such, "traditional" history expresses precursor relationships which are incapable of documentation and may be inaccurate. set forth for Metzger by Germer under Mellinger's tutelage.

Affiliation We were established in 1966 c.e. by Anton Szandor LaVey, who declared it the Year One, Anno Satanas, thus opening the floodgates to a revolution designed to smash the hypocrisy and unreason of organized religions and mystical philosophies of either Right or Left-Hand paths. We stand as a formidable threat to those who would halt progress in the name of spirituality and theism of any sort. We are explorers on the untrodden paths of science, human motivation and mystery—all that is most truly occult. Our primary goal is to clearly disseminate the philosophy created by Anton Szandor LaVey to those who have an interest in understanding the truth regarding our beliefs and practices, and to encourage individuals who embrace Satanism to utilize this perspective as a means for enhancing their lives and for leaving a legacy of creativity that demonstrates to human society the potency of our diabolical perspective. Join the Church of Satan We are looking for a few outstanding individuals.