Marco Tempest: The electric rise and fall of Nikola Tesla 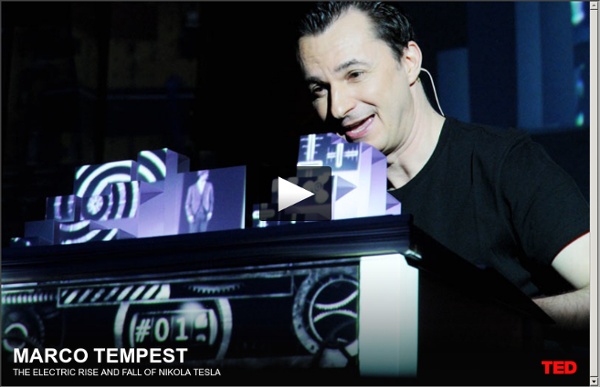 The 10 Best TED Talks of 2011 Watching videos online is usually considered fun, but generally a waste of time. Not so with TED videos, which are uniformly interesting, educational, inspiring, and enjoyable. If you haven't spent much time (or any) checking out TED videos, you should – and to help with that, I've compiled what seem to be the very best 10 TED videos of 2011. It was a grueling task, combing through the cream of the crop on the TED site, but somebody had to do it. Some of the talks may have been filmed prior to 2011 but all of the talks here were posted in 2011. Unless you were lucky enough to attend the TED event in question, it's still new to you. How I Became 100 Artists You don't need to be an artist to appreciate Shea Hembrey's "How I became 100 artists," but if you are it's even more amazing. A Modern Take on Piano, Violin, Cello If music is more your thing, then the "Modern Take on Piano, Violin, Cello" entry from the Ahn Trio is a must-watch (and listen). 3 Things I Learned While My Plane Crashed

Why Nikola Tesla was the greatest geek who ever lived - The Oatmeal - Pale Moon Additional notes from the author: If you want to learn more about Tesla, I highly recommend reading Tesla: Man Out of Time Also, this Badass of the week by Ben Thompson is what originally inspired me to write a comic about Tesla. Ben's also got a book out which is packed full of awesome. There's an old movie from the 80s on Netflix Instant Queue right now about Tesla: The Secret of Nikola Tesla. It's corny and full of bad acting, but it paints a fairly accurate depiction of his life.

15 TED Talks That Will Change Your Life Feel like getting inspired, motivated or just looking for a feel-good cry? Then look no further. There's no better way to start your day than with a fresh cup of coffee and a nice TED talk to make you feel ready to take on your day. But don't feel overwhelmed, we've rounded up 15 of the most inspirational, tear-jerking and downright beautiful TED talks out there. Did we miss one that you love? 1. This is an incredibly moving talk from a woman who has dedicated her life to researching psychiatry and schizophrenia. P.S. 2. Brené Brown's extremely personal talk explores the uncomfortable feeling of vulnerability, and how those who dare to be vulnerable are generally happier and feel more deserving of love. 3. "We've completely internalized and accepted collectively this notion that creativity and suffering are somehow inherently linked, and that artistry in the end will always ultimately lead to anguish — are you guys all cool with that idea?" 4. 5. 6. 7. 8. 9. 10. 11. 12. 13. 14. 15.