Graham's number. Graham's number, named after Ronald Graham, is a large number that is an upper bound on the solution to a problem in Ramsey theory. 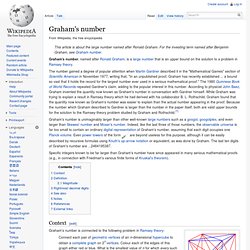 The number gained a degree of popular attention when Martin Gardner described it in the "Mathematical Games" section of Scientific American in November 1977, writing that, "In an unpublished proof, Graham has recently established ... a bound so vast that it holds the record for the largest number ever used in a serious mathematical proof. " The 1980 Guinness Book of World Records repeated Gardner's claim, adding to the popular interest in this number. According to physicist John Baez, Graham invented the quantity now known as Graham's number in conversation with Gardner himself.

While Graham was trying to explain a result in Ramsey theory which he had derived with his collaborator B. L. Graham's number is unimaginably larger than other well-known large numbers such as a googol, googolplex, and even larger than Skewes' number and Moser's number. Graviton. Theory[edit] The three other known forces of nature are mediated by elementary particles: electromagnetism by the photon, the strong interaction by the gluons, and the weak interaction by the W and Z bosons. 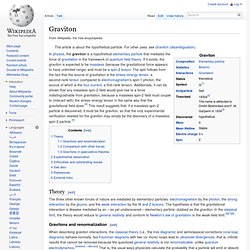 The hypothesis is that the gravitational interaction is likewise mediated by an – as yet undiscovered – elementary particle, dubbed as the graviton. In the classical limit, the theory would reduce to general relativity and conform to Newton's law of gravitation in the weak-field limit.[6][7][8] Gravitons and renormalization[edit] When describing graviton interactions, the classical theory (i.e., the tree diagrams) and semiclassical corrections (one-loop diagrams) behave normally, but Feynman diagrams with two (or more) loops lead to ultraviolet divergences; that is, infinite results that cannot be removed because the quantized general relativity is not renormalizable, unlike quantum electrodynamics. 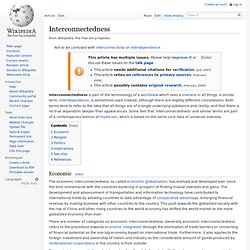 A similar term, interdependence, is sometimes used instead, although there are slightly different connotations. Both terms tend to refer to the idea that all things are of a single underlying substance and reality, and that there is no true separation deeper than appearances. Polysemy. Charles Fillmore and Beryl Atkins’ definition stipulates three elements: (i) the various senses of a polysemous word have a central origin, (ii) the links between these senses form a network, and (iii) understanding the ‘inner’ one contributes to understanding of the ‘outer’ one.[3] Polysemy is a pivotal concept within disciplines such as media studies and linguistics. 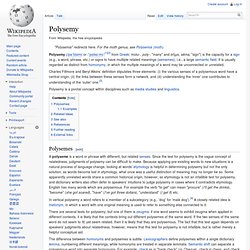 Polysemes[edit] A polyseme is a word or phrase with different, but related senses. Since the test for polysemy is the vague concept of relatedness, judgments of polysemy can be difficult to make. Because applying pre-existing words to new situations is a natural process of language change, looking at words' etymology is helpful in determining polysemy but not the only solution; as words become lost in etymology, what once was a useful distinction of meaning may no longer be so. Examples[edit] Man. Who is winning the 'crypto-war'? 15 March 2014Last updated at 20:12 ET By Gordon Corera Security correspondent, BBC News In the war over encryption between the NSA and privacy activists, who is winning? Ladar Levison sits exhausted, slumped on a sofa with his dog Princess on his lap.

He is surrounded by boxes after he moved into a new house in the suburbs of Dallas, Texas, the previous day. He describes his new home as a "monastery for programmers". Levison and co-workers plan to live and work there as they create a new email service which will allow people to communicate entirely securely and privately. Alfred North Whitehead. In his early career Whitehead wrote primarily on mathematics, logic, and physics. 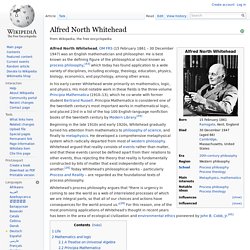 His most notable work in these fields is the three-volume Principia Mathematica (1910–13), which he co-wrote with former student Bertrand Russell. Principia Mathematica is considered one of the twentieth century's most important works in mathematical logic, and placed 23rd in a list of the top 100 English-language nonfiction books of the twentieth century by Modern Library.[44] Whitehead's process philosophy argues that "there is urgency in coming to see the world as a web of interrelated processes of which we are integral parts, so that all of our choices and actions have consequences for the world around us.

William James. William James (January 11, 1842 – August 26, 1910) was an American philosopher and psychologist who was also trained as a physician. 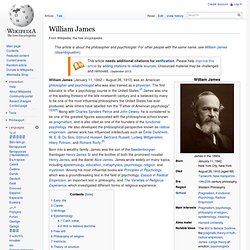 The first educator to offer a psychology course in the United States,[2] James was one of the leading thinkers of the late nineteenth century and is believed by many to be one of the most influential philosophers the United States has ever produced, while others have labelled him the "Father of American psychology".[3][4][5] Along with Charles Sanders Peirce and John Dewey, he is considered to be one of the greatest figures associated with the philosophical school known as pragmatism, and is also cited as one of the founders of the functional psychology. He also developed the philosophical perspective known as radical empiricism. James' work has influenced intellectuals such as Émile Durkheim, W. E. B. Early life[edit] William James was born at the Astor House in New York City. He took up medical studies at The Harvard Medical School in 1864. Karl Popper. Critical rationalism.

Critical rationalism is an epistemological philosophy advanced by Karl Popper. 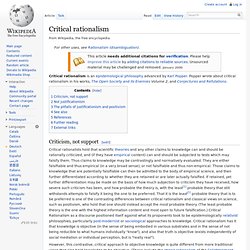 Popper wrote about critical rationalism in his works, The Open Society and its Enemies Volume 2, and Conjectures and Refutations. Criticism, not support[edit] Critical rationalists hold that scientific theories and any other claims to knowledge can and should be rationally criticized, and (if they have empirical content) can and should be subjected to tests which may falsify them. Thus claims to knowledge may be contrastingly and normatively evaluated. They are either falsifiable and thus empirical (in a very broad sense), or not falsifiable and thus non-empirical. However, this contrastive, critical approach to objective knowledge is quite different from more traditional views that also hold knowledge to be objective. 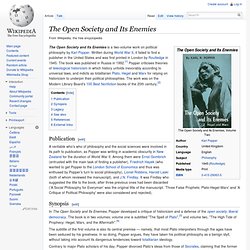 Written during World War II, it failed to find a publisher in the United States and was first printed in London by Routledge in 1945. The book was published in Russia in 1992.[1] Popper criticises theories of teleological historicism in which history unfolds inexorably according to universal laws, and indicts as totalitarian Plato, Hegel and Marx for relying on historicism to underpin their political philosophies.