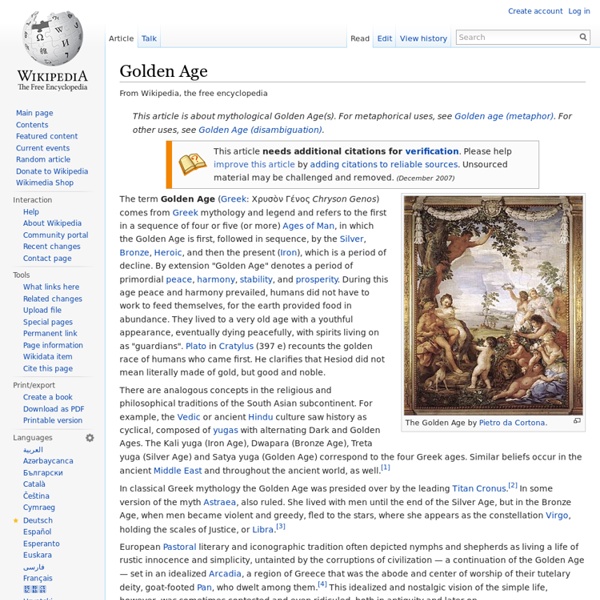 There are analogous concepts in the religious and philosophical traditions of the South Asian subcontinent. For example, the Vedic or ancient Hindu culture saw history as cyclical, composed of yugas with alternating Dark and Golden Ages. The Kali yuga (Iron Age), Dwapara (Bronze Age), Treta yuga (Silver Age) and Satya yuga (Golden Age) correspond to the four Greek ages. The Golden Age in Europe: Greece[edit] [Men] lived like gods without sorrow of heart, remote and free from toil and grief: miserable age rested not on them; but with legs and arms never failing they made merry with feasting beyond the reach of all devils. Plato in his Cratylus referred to an age of golden men and also expounded at some length on Ages of Man from Hesiod's Works and Days. Arcadia[edit] The Golden Age in Rome: Virgil and Ovid[edit] Ultima Cumaei venit iam carminis aetas; magnus ab integro saeclorum nascitur ordo: iam redit et Virgo, redeunt Saturnia regna; iam nova progenies caelo demittitur alto.

Sphinx Perhaps the first sphinx, Queen Hetepheres II from the fourth dynasty (Cairo Museum) A sphinx (Greek: Σφίγξ /sphinx/. Bœotian: Φίξ /Phix) is a mythical creature with, as a minimum, the body of a lion and a human head. In Greek tradition, it has the haunches of a lion, sometimes with the wings of a great bird, and the face of a human. It is mythicised as treacherous and merciless. In European decorative art, the sphinx enjoyed a major revival during the Renaissance. Generally the role of sphinxes is associated with architectural structures such as royal tombs or religious temples. Back of Sphinx, Giza Egypt Egyptian sphinxes[edit] The largest and most famous sphinx is the Great Sphinx of Giza, situated at the Giza Plateau adjacent to the Great Pyramids of Giza on the west bank of the Nile River and facing due east ( WikiMiniAtlas 29°58′31″N 31°08′15″E﻿ / ﻿29.97528°N 31.13750°E﻿ / 29.97528; 31.13750). Greek traditions[edit] The Riddle of the Sphinx[edit] Burmese depiction of the Manussiha

Pan (god) In Greek religion and mythology, Pan (/ˈpæn/;[1] Ancient Greek: Πᾶν, Pān) is the god of the wild, shepherds and flocks, nature of mountain wilds, hunting and rustic music, and companion of the nymphs.[2] His name originates within the Ancient Greek language, from the word paein (πάειν), meaning "to pasture."[3] He has the hindquarters, legs, and horns of a goat, in the same manner as a faun or satyr. With his homeland in rustic Arcadia, he is recognized as the god of fields, groves, and wooded glens; because of this, Pan is connected to fertility and the season of spring. The Roman Faunus, a god of Indo-European origin, was equated with Pan. The worship of Pan began in Arcadia which was always the principal seat of his worship. Representations of Pan on 4th century BC gold and silver Pantikapaion coins One of the famous myths of Pan involves the origin of his pan flute, fashioned from lengths of hollow reed. Pan is famous for his sexual powers, and is often depicted with a phallus.

Ages of Man The Ages of Man are the stages of human existence on the Earth according to Greek mythology. Both Hesiod and Ovid offered accounts of the successive ages of humanity, which tend to progress from an original, long-gone age in which humans enjoyed a nearly divine existence to the current age of the writer, in which humans are beset by innumerable pains and evils. In the two accounts that survive from ancient Greece and Rome, this degradation of the human condition over time is indicated symbolically with metals of successively decreasing value. Hesiod's Five Ages[edit] Lucas Cranach the Elder, The Silver Age The first extant account of the successive ages of humanity comes from the Greek poet Hesiod's Works and Days (lines 109–201). Ovid's Four Ages[edit] The Roman poet Ovid (1st century BC – 1st century AD) tells a similar myth of Four Ages in Book 1.89–150 of the Metamorphoses. Ovid emphasizes the justice and peace that defined the Golden Age. Historicity of the Ages[edit] See also[edit]

Achilles In Greek mythology, Achilles (/əˈkɪliːz/; Ancient Greek: Ἀχιλλεύς, Akhilleus, pronounced [akʰillěws]) was a Greek hero of the Trojan War and the central character and greatest warrior of Homer's Iliad. Achilles was said to be a demigod; his mother was the nymph Thetis, and his father, Peleus, was the king of the Myrmidons. Etymology[edit] Achilles' name can be analyzed as a combination of ἄχος (akhos) "grief" and λαός (Laos) "a people, tribe, nation, etc." In other words, Achilles is an embodiment of the grief of the people, grief being a theme raised numerous times in the Iliad (frequently by Achilles). The name Achilleus was a common and attested name among the Greeks soon after the 7th century BC.[1] It was also turned into the female form Ἀχιλλεία (Achilleía) attested in Attica in the 4th century BC (IG II² 1617) and, in the form Achillia, on a stele in Halicarnassus as the name of a female gladiator fighting an "Amazon". Birth[edit] Achilles in the Trojan War[edit] Telephus[edit]

List of legendary creatures (B) From Wikipedia, the free encyclopedia Buraq from a 17th-century Mughal miniature Greek mythology Greek mythology is explicitly embodied in a large collection of narratives, and implicitly in Greek representational arts, such as vase-paintings and votive gifts. Greek myth attempts to explain the origins of the world, and details the lives and adventures of a wide variety of gods, goddesses, heroes, heroines, and mythological creatures. These accounts initially were disseminated in an oral-poetic tradition; today the Greek myths are known primarily from Greek literature. Archaeological findings provide a principal source of detail about Greek mythology, with gods and heroes featured prominently in the decoration of many artifacts. Geometric designs on pottery of the eighth century BC depict scenes from the Trojan cycle as well as the adventures of Heracles. Sources Literary sources The poetry of the Hellenistic and Roman ages was primarily composed as a literary rather than cultic exercise. Archaeological sources Survey of mythic history Origins of the world and the gods

Hestia Origins and cults[edit] Hestia's name means "home and hearth", the oikos, the household, house, or family. . "An early form of the temple is the hearth house; the early temples at Dreros and Prinias on Crete are of this type as indeed is the temple of Apollo at Delphi which always had its inner hestia"[3] The Mycenaean great hall, such as the hall of Odysseus at Ithaca was a megaron, which had a central hearth. Myths and attributes[edit] "Hestia full of Blessings", Egypt, 6th century tapestry (Dumbarton Oaks Collection) Hestia's Olympian status is equivocal. The ambiguities in Hestia's mythology are matched by her indeterminate attributes, character and iconography. Homeric hymn 24, To Hestia, is a brief invocation of five lines:[17] Hestia, you who tend the holy house of the lord Apollo, the Far-shooter at goodly Pytho, with soft oil dripping ever from your locks, come now into this house, come, having one mind with Zeus the all-wise: draw near, and withal bestow grace upon my song.

Hecate Ancient Greek goddess of magic and crossroads Hecate was one of the main deities worshiped in Athenian households as a protective goddess and one who bestowed prosperity and daily blessings on the family.[5] In the post-Christian writings of the Chaldean Oracles (2nd–3rd century CE) she was regarded with (some) rulership over earth, sea, and sky, as well as a more universal role as Savior (Soteira), Mother of Angels and the Cosmic World Soul.[6][7] Regarding the nature of her cult, it has been remarked, "she is more at home on the fringes than in the center of Greek polytheism. Intrinsically ambivalent and polymorphous, she straddles conventional boundaries and eludes definition. Name and origin[edit] The origin of the name Hecate (Ἑκάτη, Hekátē) and the original country of her worship are both unknown, though several theories have been proposed. Greek origin[edit] R. Egyptian origin[edit] Anatolian origin[edit] Later development[edit] Iconography[edit] Sacred animals[edit] Sacred plants[edit]