Meet the Man Who Transforms Corpses into Diamonds 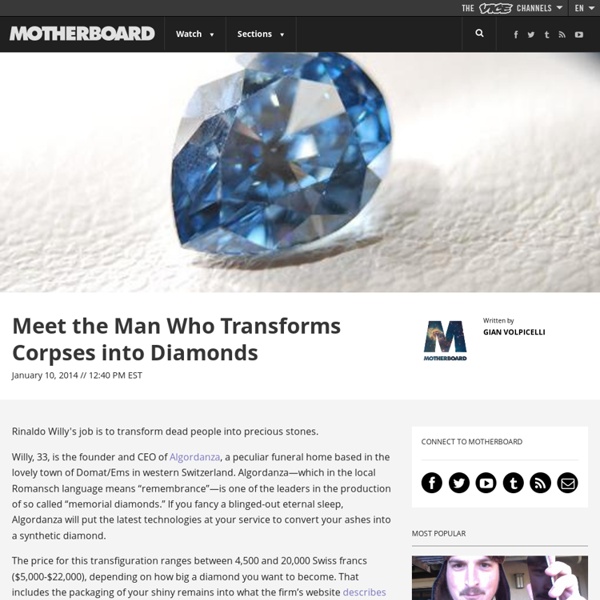 Rinaldo Willy's job is to transform dead people into precious stones. Willy, 33, is the founder and CEO of Algordanza, a peculiar funeral home based in the lovely town of Domat/Ems in western Switzerland. Algordanza—which in the local Romansch language means “remembrance”—is one of the leaders in the production of so called “memorial diamonds.” If you fancy a blinged-out eternal sleep, Algordanza will put the latest technologies at your service to convert your ashes into a synthetic diamond. The price for this transfiguration ranges between 4,500 and 20,000 Swiss francs ($5,000-$22,000), depending on how big a diamond you want to become. That includes the packaging of your shiny remains into what the firm’s website describes as a “noble wooden box.” Every year, 850 former-people enter Algordanza’s laboratory to emerge some years later as a precious gem. To further investigate, I caught up with the man himself, Rinaldo Willy. A memorial diamond mounted on a ring Let’s get a bit technical.

Robbie Maddison Just Rode a Wave in Tahiti… on a Motorcycle In the summer of 2015, Australian motorbike stunt rider Robbie Maddison realized a vision that was three years in the making. “Pipe Dream” by DC Shoes takes viewers to the stunning island of Tahiti where Maddison successfully rode the island’s legendary waves on a motorcycle. Maddison adds: “It’s not about being the first or being right, it’s about believing in yourself because you know something is possible.” DC Shoes Presents: ROBBIE MADDISON’S PIPE DREAM Three Feminist Geniuses Just Invented a Pair of Panties That Could Change the World Menstruation is a natural part of life, but it has long been and continues to be stigmatized. For many women, there's nothing worse than a noticeable leak during their period. But alongside the stigma-fueled embarrassment and shame, problems like lack of access to feminine hygiene products remain prevalent, especially in the developing world. Some girls in Uganda, for example, miss roughly 11% of their academic year because of their periods, according to a report on menstrual management. However, three women have created a way to change that.

Study Finds Nearly All Scientific Papers Controlled By Six Corporations When children grow up dreaming of becoming scientists they have the purest of aspirations and if they were left to pursue their own studies they would be able to accomplish the unimaginable. Unfortunately, to become a member of the scientific community one has to jump through many bureaucratic hoops until they are eventually inducted into an establishment which is tightly regulated and directed by warmongers and control freak aristocrats. People spend half of their lives taking classes, passing tests and filling out applications in hopes that one day they can become a scientist and cure a disease. After years of struggling to make the cut they realize that there is no funding for their charitable projects and if they dare step outside of the established guidelines they will be exiled from the scientific community. “Overall, the major publishers control more than half of the market of scientific papers both in the natural and medical sciences and in the social sciences and humanities.

Artists Sail 1000 Nautical Miles Collecting Plastic, Transforming it Into Works of Art Alexander Groves and Azusa Murakami of Studio Swine recently sailed 1000 nautical miles, collecting discarded plastic as they made their way from the Azores to the Canaries via the North Atlantic Gyre. Onboard was a ‘solar extruder’, a machine the two designed and built that melts and extrudes sea plastic by harnessing the power of the sun. The two then created five beautiful works of art from the discarded plastic in a wonderful project and film entitled, Gyrecraft. Groves and Murakami explain: Gyrecraft is an exploration into maritime crafts which exists in every coastal or island culture around the world each with its own unique identity, utilising what the sea provides.

The Cyborg Who Can 'Hear' What Other People Are Looking At Being recognised as one of the world’s first cyborgs is pretty cool, but now that cybernetics are getting more common and everyone’s starting to stick technology on their bodies through wearables or DIY implants, it takes constant innovation to stay ahead of the curve. So when I heard Neil Harbisson had a few updates on his unique antenna-like modification, I was keen to see what could push the boundaries of the human body more than giving yourself a new sense. The answer? Sharing in other people’s senses. Atacama Humanoid Is Human, Researchers Say The tiny humanoid discovered in Chile's Atacama Desert in 2003 is a human being, not an alien, researchers have concluded. The six-inch skeleton, nicknamed "Ata," was thought by some to be proof of extraterrestrial life, but Garry Nolan, a microbiology professor at Stanford School of Medicine, said his study of the skeleton shows it to be human, reports LiveScience. "Every nucleotide I've been able to look at is human," Nolan told LiveScience.

A Renaissance painting reveals how breeding changed watermelons Christie Images LTD 2015 Look in the bottom right corner of this painting. If you've never seen a watermelon like that before, you're not alone. This 17th-century painting by Giovanni Stanchi, courtesy of Christie's, shows a type of watermelon that no one in the modern world has seen. Stanchi's watermelon, which was painted sometime between 1645 and 1672, offers a glimpse of a time before breeding changed the fruit forever. Christie Images LTD 2015/Shutterstock Teen Invents Flashlight That Could Change The World Ann Makosinski was just another teenager with another science project when she joined her local science fair in Victoria, Canada, last year. Her invention, a flashlight that is powered solely from hand heat, took second place at the competition. Ann, 16, and her parents, both of whom are HAM radio operators and like to fiddle with electronics, were satisfied with that result.