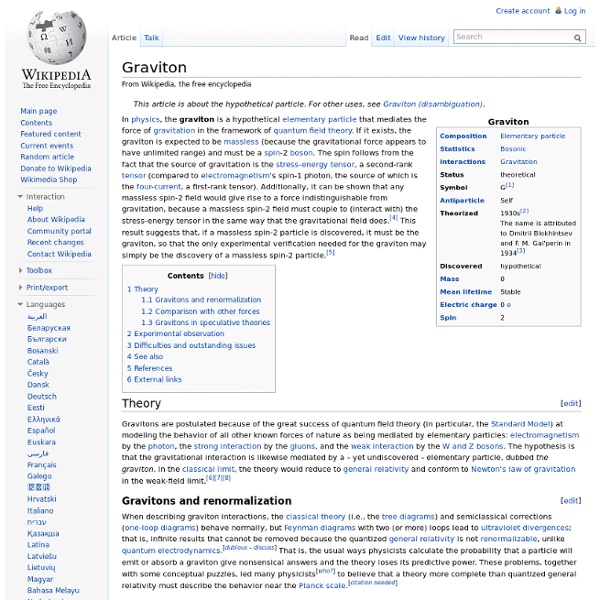 Theory[edit] The three other known forces of nature are mediated by elementary particles: electromagnetism by the photon, the strong interaction by the gluons, and the weak interaction by the W and Z bosons. The hypothesis is that the gravitational interaction is likewise mediated by an – as yet undiscovered – elementary particle, dubbed as the graviton. In the classical limit, the theory would reduce to general relativity and conform to Newton's law of gravitation in the weak-field limit.[6][7][8] Gravitons and renormalization[edit] When describing graviton interactions, the classical theory (i.e., the tree diagrams) and semiclassical corrections (one-loop diagrams) behave normally, but Feynman diagrams with two (or more) loops lead to ultraviolet divergences; that is, infinite results that cannot be removed because the quantized general relativity is not renormalizable, unlike quantum electrodynamics. Comparison with other forces[edit] Gravitons in speculative theories[edit] See also[edit] Related:  Leseliste

Tests of general relativity The very strong gravitational fields that must be present close to black holes, especially those supermassive black holes which are thought to power active galactic nuclei and the more active quasars, belong to a field of intense active research. Observations of these quasars and active galactic nuclei are difficult, and interpretation of the observations is heavily dependent upon astrophysical models other than general relativity or competing fundamental theories of gravitation, but they are qualitatively consistent with the black hole concept as modelled in general relativity. As a consequence of the equivalence principle, Lorentz invariance holds locally in freely falling reference frames. Experiments related to Lorentz invariance and thus special relativity (i.e., when gravitational effects can be neglected) are described in Tests of special relativity. Classical tests[edit] The chief attraction of the theory lies in its logical completeness. Perihelion precession of Mercury[edit]

Gravity Probe B - Special & General Relativity Questions and Answers It is true that, given enough energy, you could be propelled so fast that 1 year back home would pass for you in a few minutes; a ride across the Milky Way covering 100,000 light years could be done in a few seconds; or even a ride across the visible universe of 14 billion light years could be done in a second or less...given an ultimate source of power to get you to those speeds. For a photon, or any other particle traveling at ESSENTIALLY the speed of light, any arbitrarily long distance could be traversed in less than a second....but eternity is different. For you to get boosted to a speed where 'eternity would pass in an instant' you would travel essentially an infinite distance, and the energy you would need to accelerate you would be infinite as well. Return to the Special & General Relativity Questions and Answers page. All answers are provided by Dr.

Vis-viva equation Vis viva (Latin for "live force") is a term from the history of mechanics, and it survives in this sole context. It represents the principle that the difference between the aggregate work of the accelerating forces of a system and that of the retarding forces is equal to one half the vis viva accumulated or lost in the system while the work is being done. Vis viva equation[edit] For any Kepler orbit (elliptic, parabolic, hyperbolic or radial), the vis viva equation[1] is as follows: where: v is the relative speed of the two bodiesr is the distance between the two bodiesa is the semi-major axis (a > 0 for ellipses, a = ∞ or 1/a = 0 for parabolas, and a < 0 for hyperbolas)G is the gravitational constantM is the mass of the central body Note - the product of GM can also be expressed as the Greek letter μ. Derivation[edit] In the vis-viva equation the mass m of the orbiting body (e.g., a spacecraft) is taken to be negligible in comparison to the mass M of the central body (e.g., the Earth). Thus,

Tensor Cauchy stress tensor, a second-order tensor. The tensor's components, in a three-dimensional Cartesian coordinate system, form the matrix whose columns are the stresses (forces per unit area) acting on the e1, e2, and e3 faces of the cube. Tensors are used to represent correspondences between sets of geometric vectors. Because they express a relationship between vectors, tensors themselves must be independent of a particular choice of coordinate system. Tensors are important in physics because they provide a concise mathematical framework for formulating and solving physics problems in areas such as elasticity, fluid mechanics, and general relativity. Definition[edit] There are several approaches to defining tensors. As multidimensional arrays[edit] Just as a scalar is described by a single number, and a vector with respect to a given basis is described by an array of one dimension, any tensor with respect to a basis is described by a multidimensional array. as, Definition. . Examples[edit]

Quantum electrodynamics In particle physics, quantum electrodynamics (QED) is the relativistic quantum field theory of electrodynamics. In essence, it describes how light and matter interact and is the first theory where full agreement between quantum mechanics and special relativity is achieved. QED mathematically describes all phenomena involving electrically charged particles interacting by means of exchange of photons and represents the quantum counterpart of classical electromagnetism giving a complete account of matter and light interaction. History[edit] The first formulation of a quantum theory describing radiation and matter interaction is attributed to British scientist Paul Dirac, who (during the 1920s) was first able to compute the coefficient of spontaneous emission of an atom.[2] Difficulties with the theory increased through the end of 1940. QED has served as the model and template for all subsequent quantum field theories. Feynman's view of quantum electrodynamics[edit] Introduction[edit] or

Dimensional analysis Dimensional analysis is routinely used as a check on the plausibility of derived equations and computations. It is also used to categorize types of physical quantities and units based on their relationship to or dependence on other units. Great principle of similitude[edit] The basic principle of dimensional analysis was known to Isaac Newton (1686) who referred to it as the "Great Principle of Similitude".[1] James Clerk Maxwell played a major role in establishing modern use of dimensional analysis by distinguishing mass, length, and time as fundamental units, while referring to other units as derived.[2] The 19th-century French mathematician Joseph Fourier made important contributions[3] based on the idea that physical laws like F = ma should be independent of the units employed to measure the physical variables. Definition[edit] The term dimension is more abstract than scale unit: mass is a dimension, while kilograms are a scale unit (choice of standard) in the mass dimension.

Tests of special relativity Special relativity is a physical theory that plays a fundamental role in the description of all physical phenomena, as long as gravitation is not significant. Many experiments played (and still play) an important role in its development and justification. The strength of the theory lies in its unique ability to correctly predict to high precision the outcome of an extremely diverse range of experiments. Repeats of many of those experiments are still being conducted with steadily increased precision, with modern experiments focusing on effects such as at the Planck scale and in the neutrino sector. Their results are consistent with the predictions of special relativity. Special relativity is restricted to flat spacetime, i.e., to all phenomena without significant influence of gravitation. Experiments paving the way to relativity[edit] First-order experiments[edit] Second-order experiments[edit] Michelson-Morley interferometer Refutations of complete aether drag[edit] Lodge's ether machine.