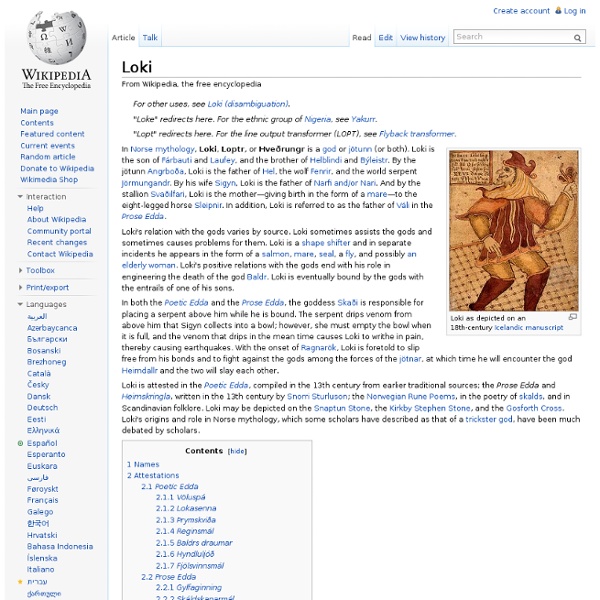 Loki, from an 18th-century Icelandic manuscript In both the Poetic Edda and the Prose Edda, the goddess Skaði is responsible for placing a serpent above him while he is bound. The serpent drips venom from above him that Sigyn collects into a bowl; however, she must empty the bowl when it is full, and the venom that drips in the meantime causes Loki to writhe in pain, thereby causing earthquakes. With the onset of Ragnarök, Loki is foretold to slip free from his bonds and to fight against the gods among the forces of the jötnar, at which time he will encounter the god Heimdallr and the two will slay each other. Loki is referred to in the Poetic Edda, compiled in the 13th century from earlier traditional sources; the Prose Edda and Heimskringla, written in the 13th century by Snorri Sturluson; the Norwegian Rune Poems, in the poetry of skalds, and in Scandinavian folklore. Names The etymology of the name Loki has yet to be solved. The name Hveðrungr (Old Norse '? Attestations Poetic Edda Related:  Film

Balius and Xanthus Mythology[edit] Poseidon gave the two horses to King Peleus of Phthia, as a wedding gift, when Peleus married the Ocean goddess Thetis. Peleus later gave the horses to his son Achilles who took them to draw his chariot during the Trojan War. At Iliad 17.474-8, Automedon, Achilles' charioteer, states that only Patroclus was able to fully control these horses. When Xanthus was rebuked by the grieving Achilles for allowing Patroclus to be slain, Hera granted Xanthus human speech allowing the horse to say that a god had killed Patroclus and that a god would soon kill Achilles too. Based on fragments from Alcman and Stesichorus, an alternative story of the horses can be derived.[1] The horses, named Xanthus and Cyllarus are the sons of Poseidon, who gave them to Hera as a gift. References[edit] Homer. External links[edit] Media related to Balius and Xanthus at Wikimedia Commons

22 Bullets Plot[edit] Three years ago mafia boss Charly Matteï retired and left the business to his old friend Tony Zacchia, and has led a peaceful life since, devoting himself to his wife and two children. His past catches up with him when he is ambushed by an eight-man hit squad in a parking lot and left for dead with 22 bullets in his body. On the hunt for the shooters, he finds himself confronted with his criminal past and resulting threat to his family. Marie Goldman is the policewoman investigating the shooting in the parking lot. In the end, Matteï is released as the cops do not have enough evidence to charge him. Cast[edit] Reno at the premiere of the film References[edit] External links[edit] The Horses of Helios The Horses of Helios, also known as The Four Bronze Horses of Helios,[1] is a bronze sculpture of four horses by Rudy Weller. It is one half of a commission installed in 1992 when the adjacent Criterion Theatre was refurbished. The other half, the Daughters of Helios or Three Graces, is a sculpture of three women leaping off the building six stories above. The sculpture was installed in 1992 in a fountain under a canopy at the base of the building at 1 Jermyn Street, on the corner where Piccadilly meets Haymarket, near Piccadilly Circus in London.[2] The building is adjacent to the Criterion Theatre, and was installed when the theatre was refurbished. References[edit] Piccadilly Circus, Secret London External links[edit]

Chinatown Ethnic enclave of expatriate Chinese persons A Chinatown (Chinese: 唐人街; pinyin: Tángrénjiē; Jyutping: tong4 jan4 gaai1) is an ethnic enclave of Chinese people located outside mainland China, Hong Kong, Macau or Taiwan, most often in an urban setting. Areas known as "Chinatown" exist throughout the world, including Europe, North America, South America, Asia, Africa, Australasia and the Middle East. The development of most Chinatowns typically resulted from mass migration to an area without any or with very few Chinese residents. Binondo in Manila, established in 1594, is recognized as the world's oldest Chinatown. Notable early examples outside Asia include San Francisco's Chinatown in the United States and Melbourne's Chinatown in Australia, which were founded in the mid-19th century during the California Gold Rush and Victorian gold rush, respectively. Definition[edit] History[edit] In Asia[edit] Several Asian Chinatowns, although not yet called by that name, have a long history.

Horses of Helios the Sun God | The Equinest Helios was the Greek Sun God and his job was to drove the sun from east to west in the sky on his four-horse chariot. Helios is closely identified with the mythology of Apollo. Helios at Night After sun set, Helios allowed his tired horses to graze in their western home. Late in the night he would board a golden barge made to transport his chariot & animals. Helios had a Sun Stable where he kept his horses along with other flying horses of Greek mythology including Pegasus & Apollo’s horses. The Chosen Few These horses were the favorite of Helios and most often used to pull his sun chariot. PhlegonAeosAethonPyrios Sun Stable Residents Helios did choose different horses from time to time & had a large stable of animals to choose from. Lampos – Used by ApolloActaeon – Used by ApolloChronosAsteropeBronteErytherosPegasusPhaeton Phaeton’s Story Phaeton was the son of Helios and an Ethiopian princess and unfortunately one day curiosity got the better of him. So Many Mythological Horses

The Villainess 2017 film by Jung Byung-gil The Villainess (Korean name 악녀; Ak Nyeo) is a 2017 South Korean action film directed by Jung Byung-gil, starring Kim Ok-vin.[2] The film had its world premiere at the 70th Cannes Film Festival in May 2017.[3][4][5] Plot[edit] In the opening scene, an unnamed highly skilled and trained assassin enters a hallway and kills numerous people with her gun and knives before being surrounded by cops and smiling a grim smile. The assassin is shown in a room in an unnamed facility. The facility turns out to be part of South Korea's intelligence agency and is run by a woman named Kwon-sook. Still at the facility, Yeon-soo is having a procedure to remove a tattoo from her shoulder and while this is happening, she has a flashback to the unnamed man with a mustache giving her the shoulder tattoo when she was 20-year-old Sook-hee. Kwon-sook gives Yeon-soo a folder with the info for her first "assignment." After a few meetings with each other, Yeon-soo asks Hyun-soo out.

Epithets in Homer A characteristic of Homer's style is the use of epithets, as in "rosy-fingered" Dawn or "swift-footed" Achilles. Epithets are used because of the constraints of the dactylic hexameter (i.e., it is convenient to have a stockpile of metrically fitting phrases to add to a name) and because of the oral transmission of the poems; they are mnemonic aids to the singer and the audience alike.[1] Epithets alter the meaning of each noun to which they are attached. They specify the existential nature of a noun; that is to say, Achilles is not called "swift-footed" only when he runs; it is a marker of a quality that does not change. List[edit] General[edit] Nations[edit] Individuals[edit] Shared[edit] See also[edit] List of kennings - kennings in Icelandic, Old Norse, and Old EnglishMakurakotoba — epithets in classical Japanese Notes[edit] ^ Parry 1928: 5-10^ John Curtis Franklin, Structural Sympathies in Ancient Greek and South-Slavic Heroic Singing.^ Parry 1971: 121 Sources[edit] Parry, Milman.

Ferdinand Cheval French postman known for building the sculpture of a castle on his own We ask you, humbly: don't scroll away. Hi reader. This is the 4th time we’ve interrupted your reading recently, but 98% of our readers don't give. Many think they’ll give later, but then forget. Thank you! Ferdinand Cheval (19 April 1836 – 19 August 1924) was a French postman who spent thirty-three years of his life building Le Palais idéal (the "Ideal Palace") in Hauterives.[1][2] The Palace is regarded as an extraordinary example of naïve art architecture. Origins[edit] Joseph Ferdinand Cheval, also known as Facteur Cheval (Postman/Mailman Cheval)[3] was born in Charmes-sur-l'Herbasse into a poor farming family.[4] He left school at the age of 13 to become a baker's apprentice, but eventually became a postman.[1][2] In 1858, Cheval married his first wife, Rosaline Revol. Palais idéal[edit] The starting point: the unusually-shaped stone that Cheval tripped over Burial[edit] Cheval wanted to be buried in his palace.