Why Nikola Tesla was the greatest geek who ever lived 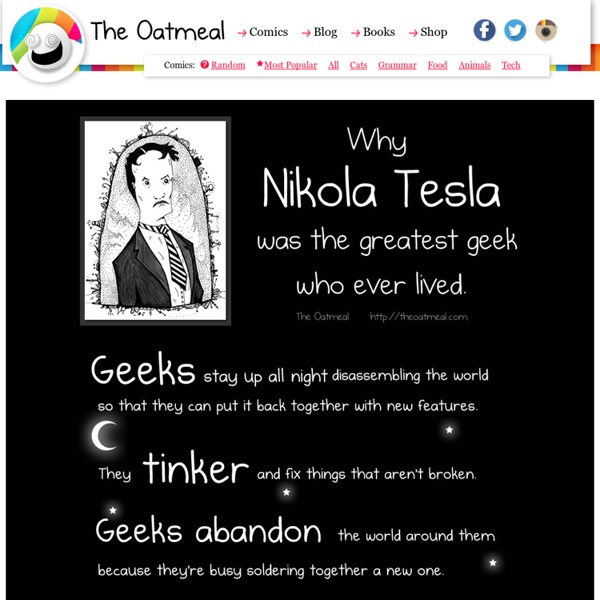 Additional notes from the author: If you want to learn more about Tesla, I highly recommend reading Tesla: Man Out of Time Also, this Badass of the week by Ben Thompson is what originally inspired me to write a comic about Tesla. Ben's also got a book out which is packed full of awesome. There's an old movie from the 80s on Netflix Instant Queue right now about Tesla: The Secret of Nikola Tesla. It's corny and full of bad acting, but it paints a fairly accurate depiction of his life. The drunk history of Tesla is quite awesome, too. History.com has a great article about Edison and how his douchebaggery had a chokehold on American cinema.

20 Most Influential Scientists Alive Today Scientists are perhaps the most influential people in the world today. They are responsible not only for the great practical advances in medicine and technology, but they also give us a deep understanding of what the world is and how it works. Their role in shaping the worldview of our culture is unrivaled. Light touch keeps a grip on delicate nanoparticles Using a refined technique for trapping and manipulating nanoparticles, researchers at the National Institute of Standards and Technology (NIST) have extended the trapped particles' useful life more than tenfold. This new approach, which one researcher likens to "attracting moths," promises to give experimenters the trapping time they need to build nanoscale structures and may open the way to working with nanoparticles inside biological cells without damaging the cells with intense laser light. Scientists routinely trap and move nanoparticles in a solution with "optical tweezers" -- a laser focused to a very small point.

Awesome pictures from around the world Someone sent me these in a chain email, it was horribly formatted. I also do not know who made the comments, or how accurate they are. I take zero credit in the pictures, I just wanted to compile them nicely for all to see. The world’s highest chained carousel, located in Vienna, the height of 117 meters. Thor’s Well – “the gates of the dungeon.” Can Going Without Money Hurt the Economy? One Man's Quest to Be Penniless Daniel Suelo is 51 years old and broke. Happily broke. Consciously, deliberately, blessedly broke. Not only does he not have debt, a mortgage or rent, he does not earn a salary. 8 Abandoned American Theme Parks “Open” for Exploration Amusement parks walk the fine line between fun-ish and semi-creepy. Maybe it’s the combination of sketchy rides, circus folk, questionable attractions, and way too many screaming kids, but there’s something a little unsettling about them. Add an ill-advised theme into the mix, and you’ve got a real summer-time winner.

20 Most Influential Women Intellectuals Women intellectuals have been playing an increasingly important role in shaping thought and culture. Here is SuperScholar’s list of the 20 most influential living women intellectuals. Margaret Atwood (1939– ), an iconic Canadian feminist novelist, expresses both the “goddess” and “activist” modes of the mid-twentieth century movement, via a confrontational style that gained converts by avoiding both violence and eccentricity. Aung San Suu Kyi (1945– ), a Nobel Peace Prize laureate and scholar living under house arrest and many other restrictions imposed by her native Burma’s (Myanmar’s) military rulers, leads a popular political movement and party whose non-violence and civil disobedience offer hope for eventual democratic government. Karen Armstrong (1944– ), formerly a Roman Catholic nun in her native Britain and widely considered a force for ecumenism, now considers herself a “creative monotheist,” whose many books offer iconoclasm regarding major monotheist religions.

Moving slabs [This Dynamic Earth, USGS] The layer of the Earth we live on is broken into a dozen or so rigid slabs (called tectonic plates by geologists) that are moving relative to one another. "Historical perspective" Investors - GTSO Resources New joint venture partner GTSO finalizes joint venture agreement with Chilerecicla, a top recycling company in Latin America, to expand its current operations in Chile to surrounding countries in Latin America. This new joint venture Chilerecicla E-Waste is a major step for GTSO Resources to expand its operations globally in an explosive region such as South America. Chilerecicla provides comprehensive management service and consultancy for the recycling of e-waste all over Chile and is rapidly expanding into other countries across Latin America. The corporate philosophy is to develop and promote sustainable business practices in companies producing or selling electronic equipment as well as proper disposal of e-waste for reuse.

Napoleon complex British propaganda of the time promoted the idea that Napoleon was short. In reality, his height was above average for the period. Napoleon complex, or "short man syndrome", is a pejorative slang term describing a type of psychological phenomenon which is said to exist in people, usually men, of short stature.[1] It is characterized by overly-aggressive or domineering social behaviour, and carries the implication that such behaviour is compensatory for the subjects' stature. The term is also used more generally to describe people who are driven by a perceived handicap to overcompensate in other aspects of their lives.

Why I decided to learn languages (14 and counting) Alex Rawlings, who won a competition to find Britain's most multi-lingual student in 2011, explains why learning foreign languages is so rewarding, and how his school helped set him on this path. The UK, my home country, can be a place of great contradictions. We’re famous for being reluctant to speak other languages and indignant about whether they even have a use.

right, i thought it was spam, as both of them are almost same by ashishbihani Apr 12

This is a non-fiction argumentative article on Nikola Tesla. Tesla was a 'geek' who created,found,and invented many great things but did not get recognition for it. It argues that Tesla is compared to Thomas Edison and stating that Tesla created the lightbulb rather than Edison. Tesla helped to invent alternating currents which drove the idea of the lightbulb. With help from 22 other men, Edison took credit for the invention rather then Tesla. This is a very comical non fiction piece that goes on to explain all the ideas that Tesla had and how he was a genius. It also explains how other scientists took credit for Tesla's ideas so he is not as well known. It is argued that he is one of the greatest scientists while using real facts found in history. It is a different approach at a non fiction article. by bridgets_sstories Apr 8

This article is an argumentative article on Nikola Telsa. The argument is on how he was the better scientist of his time, versus Thomas Edison. The argument is made using Telsa's inventions and findings in the scientific field. Most of the piece is an argument going between Edison and Telsa's contribution to science, and the later half applauds Tesla for his extraordinary work. While the text is very opinionated, it still uses actual facts making it a non-fiction piece. by hailey_g Apr 8