What is Economic Democracy? - The Next System Project. Video Games - China - Money - Online Games. Ultra-rich man's letter: "To My Fellow Filthy Rich Americans: The Pitchforks Are Coming" Brigid Schulte’s Overwhelmed and our epidemic of busyness. Mashable. America has gone through a rapid social experiment over the last 20 years. 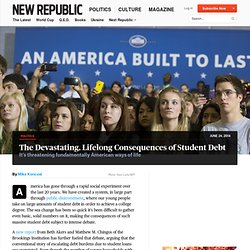 We have created a system, in large part through public disinvestment, where our young people take on large amounts of student debt in order to achieve a college degree. ‘Slomo’ Slomo came into my life at an opportune moment. 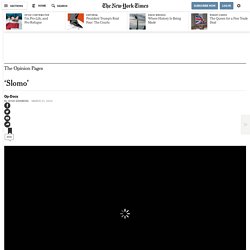 Having just rolled into my 30s, I was looking for both a film subject and some wisdom on how to approach the encroaching “middle third” of my life — the years when youthful idealism is so often blunted by adult responsibilities. Around this time, during a business trip to San Diego, my father had a chance meeting on the Pacific Beach boardwalk with John Kitchin, an old medical school classmate.

My dad barely recognized Dr. Finnish Education Chief: 'We Created a School System Based on Equality' - Christine Gross-Loh. Finnish education often seems paradoxical to outside observers because it appears to break a lot of the rules we take for granted. 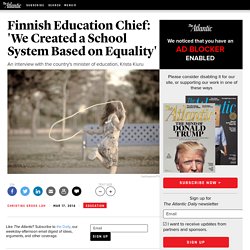 Finnish children don’t begin school until age 7. They have more recess, shorter school hours than many U.S. children do (nearly 300 fewer hours per year in elementary school), and the lightest homework load of any industrialized nation. There are no gifted programs, almost no private schools, and no high-stakes national standardized tests. Yet over the past decade Finland has consistently performed among the top nations on the Programme for International Student Assessment (PISA), a standardized test given to 15-year olds in 65 nations and territories around the world. An Economy That Benefits Ordinary People? What We Learned From the 1% by George Goehl and Bree Carlson. When thinking 40 years into the future, people step out of the current political situation, and our sense of what's possible becomes much more expansive. 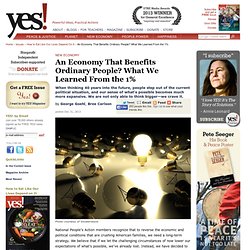 We are not only able to think bigger—we crave it. posted Dec 31, 2013 Photo courtesy of Shutterstock. National People’s Action members recognize that to reverse the economic and political conditions that are crushing American families, we need a long-term strategy. In Praise of the Utopian Political Imagination. Share French economist Thomas Piketty (Reuters/Charles Platiau) The big inequality news this week has been the publication of Thomas Piketty’s monumental book about the subject, Capital in the Twenty-First Century. 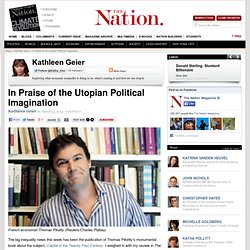 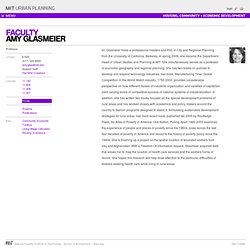 Glasmeier holds a professional masters and PhD in City and Regional Planning from the University of California, Berkeley. In spring 2009, she became the Department Head of Urban Studies and Planning at MIT. She simultaneously serves as a professor of economic geography and regional planning. She has two books on policies to develop and expand technology industries. Her book, Manufacturing Time: Global Competition in the World Watch industry, 1750-2000, provides considerable perspective on how different modes of industrial organization and varieties of capitalism yield varying levels of competitive success of national systems of industrialization. How to Think About the Federal "Nudge Squad" Fox News this week has the not very surprising news that the Obama Administration is looking for social scientists to help form a "Behavioral Insights Team" that, like the group of the same name in Britain, will develop policies that work with, rather than against, the mind's unconscious and irrational components. 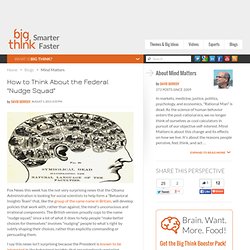 The British version proudly cops to the name "nudge squad," since a lot of what it does to help people "make better choices for themselves" involves "nudging" people to what's right by subtly shaping their choices, rather than explicitly commanding or persuading them. I say this news isn't surprising because the President is known to be interested in the behavioral insights that are relentlessly replacing "Rational Economic Man" as models for how people think and act. It's no surprise that Obama's government would move to harness behavioral insights to shape policy. New Economics Institute. Peter Turchin – The history of inequality. Today, the top one per cent of incomes in the United States accounts for one fifth of US earnings. 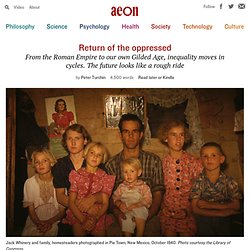 The top one per cent of fortunes holds two-fifths of the total wealth. Just one rich family, the six heirs of the brothers Sam and James Walton, founders of Walmart, are worth more than the bottom 40 per cent of the American population combined ($115 billion in 2012). Automation Anxiety. In Ulysses (1922), it’s been said, James Joyce packed all of life into a single Dublin day. 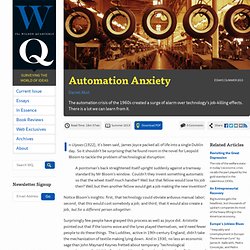 So it shouldn’t be surprising that he found room in the novel for Leopold Bloom to tackle the problem of technological disruption: A pointsman’s back straightened itself upright suddenly against a tramway standard by Mr Bloom’s window. Charmian Gooch: Meet global corruption's hidden players. Inequality is real, personal, expensive, and it was created. 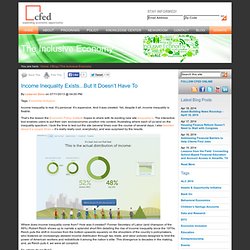