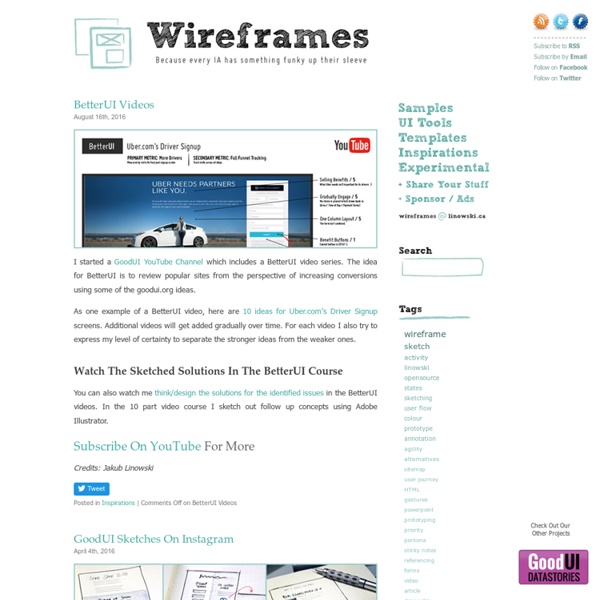 Well, this surely is a bit away from traditional wireframing and sketching, but I just needed to share these inspirational business podcasts somehow. Fact is, I’ve been listening to these for quite some time now and they have been driving a big chunk of my thinking recently. They are all very entrepreneurial and startup oriented in nature while highly motivational as well. Personally, I found them as a nice way to complement the morning commute while stirring lots of business thinking. The list goes on starting from my favorite at the top: The Business of Freelancing Podcast

Sketches, Wireframes & CSS It seems that I keep refining my interface design process for each new project that I work on. In this article I’d like to share with you my process of designing a user interface from sketch through to the implemented design for Apricado Music. Apricado is a service for independent musicians to sell their music online as a digital download. Step 1 – Start with a sketch. Reasons to start with a sketch: A sketchbook is a little more portable than a macbook and doesn’t run out of batteries. Wireframe : ressources gratuites Si vous n’utilisez pas de logiciels tels ceux de notre précédent article Wireframe et bien vous pouvez télécharger ces ressources et les imprimer, voire pour certains commander des cahiers entiers de wireframe de tablette par exemple. Mockup ! Les premiers sont des versions à imprimer/télécharger.

Art of the Menu About Art of the Menu, is a division of UnderConsideration, cataloguing the underrated creativity of menus from around the world. Art of the Menu uses Typekit to render Proxima Nova by Mark Simonson and Adelle by Type Together. The what, when and why of wireframes In the presentation I attempted to answer these questions; Wireframes • What are they? • Why do we use them? • When should they be used? • What are the different types? Christopher Tillman Neal Christopher Tillman Neal Seattle, WA | 510.926.5417 | chris-neal@alumni.ls.berkeley.edu I am driven by the sociology of computer-mediated communication with a solid understanding that focusing on the user optimizes user experience.

Bend 2 Squares Font 1001 Free Fonts first opened its doors in December 1998 and has since grown to become the most popular free fonts archive online. We receive more than 50,000 visitors daily and have received 150,000,000 visitors since 1998. Over 3,000,000,000 free fonts have been downloaded since 1998. We would like to thank you all for your continued support and hope you return shortly. Font Links

25 Awesome Adobe Fireworks Resources for Web and App Developers Adobe Fireworks' features and work-flow indisputably make it the industry pioneer and leader for web graphic prototyping and quick web site building. Even though, with each latest version, Adobe has slowly over-loaded it with new features. Despite the odd bug and the odd feature, it really is awesome! This post is not your typical Fireworks post. How to Write a Social Media Policy Why is having a social media policy in place so critical? Because virtually 100% of companies are now involved in social media—whether they acknowledge it or not. Even without any formal plan to use social media, every organization with more than a handful of employees (and many under that benchmark) is present in social media because people are talking about them. If no one else is discussing a company, its employees almost certainly are.

Free Wireframing Kits, UI Design Kits, PDFs and Resources - Smashing Magazine Advertisement To mock-up the user interface of a website, software or any other product, you’ll need some basic UI elements. And this is where wireframing kits and UI design kits come in handy.