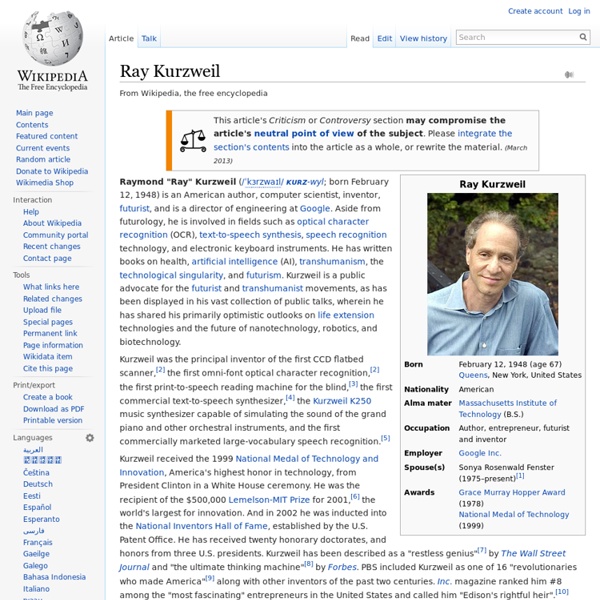 Raymond "Ray" Kurzweil (/ˈkɜrzwaɪl/ KURZ-wyl; born February 12, 1948) is an American author, computer scientist, inventor, futurist, and is a director of engineering at Google. Aside from futurology, he is involved in fields such as optical character recognition (OCR), text-to-speech synthesis, speech recognition technology, and electronic keyboard instruments. He has written books on health, artificial intelligence (AI), transhumanism, the technological singularity, and futurism. Kurzweil is a public advocate for the futurist and transhumanist movements, as has been displayed in his vast collection of public talks, wherein he has shared his primarily optimistic outlooks on life extension technologies and the future of nanotechnology, robotics, and biotechnology. Life, inventions, and business career[edit] Early life[edit] Ray Kurzweil grew up in the New York City borough of Queens. Kurzweil attended Martin Van Buren High School. Mid-life[edit] Later life[edit] Personal life[edit]

Liveblogging singularity summit Ray Kurzweil - the mind and how to build one - (Build 20100722150226) Ad Support : Nano TechnologyNetbook Technology News Computer Software Ray Kurzweil The Mind and How To Build One What does it mean to understand the brain? Where are we on the roadmap to this goal? Singularity Institute The Machine Intelligence Research Institute (MIRI) is a non-profit organization founded in 2000 to research safety issues related to the development of Strong AI. The organization advocates ideas initially put forth by I. J. Good and Vernor Vinge regarding an "intelligence explosion", or Singularity, which MIRI thinks may follow the creation of sufficiently advanced AI.[1] Research fellow Eliezer Yudkowsky coined the term Friendly AI to refer to a hypothetical super-intelligent AI that has a positive impact on humanity.[2] The organization has argued that to be "Friendly" a self-improving AI needs to be constructed in a transparent, robust, and stable way.[3] MIRI was formerly known as the Singularity Institute, and before that as the Singularity Institute for Artificial Intelligence.

solid perfume pocket watch locket Try as I might, I cannot seem to grasp even the most basic of feminine beauty rituals. I’m constantly struggling to master rudimentary hair and makeup techniques, and my one-time foray into the “subtle” art of perfume left everyone in the room with burning nostrils. This DIY solid perfume locket from artisanal perfumer Mandy Aftel is something I can definitely stand behind, though. Mandy only uses pure and natural ingredients to create her perfumes, and this solid scent can be easily applied with no risk of over-dousing.

Futurist Futurists or futurologists are scientists and social scientists whose specialty is futurology, or the attempt to systematically explore predictions and possibilities about the future and how they can emerge from the present, whether that of human society in particular or of life on Earth in general. Definition[edit] The term "futurist" most commonly refers to authors, consultants, organizational leaders and others who engage in interdisciplinary and systems thinking to advise private and public organizations on such matters as diverse global trends, possible scenarios, emerging market opportunities and risk management. (Futurist is not in the sense of the art movement futurism.) Visionary writers such as Jules Verne, Edward Bellamy and H. How to Hide Files in JPEG Pictures If you’re looking to hide files on your PC hard drive, you may have read about ways to encrypt folders or change the attributes on a file so that they cannot be accessed by prying eyes. However, a lot of times hiding files or folders in that way requires that you install some sort of software on your computer, which could then be spotted by someone else. I’ve actually written quite a few articles on how you can hide files and folders in Windows XP and Vista before, but here I’m going to show you a new way to hide files that is very counter-intuitive and therefore pretty safe!

Ben Goertzel - Wikipedia, the free encyclopedia - (Build 20100722150226) Ben Goertzel (born December 8, 1966, in Rio de Janeiro, Brazil) is Chief Scientist of financial prediction firm Aidyia Holdings; Chairman of AI software company Novamente LLC, which is a privately held software company, and bioinformatics company Biomind LLC, which is a company that provides advanced AI for bioinformatic data analysis (especially microarray and SNP data); Chairman of the Artificial General Intelligence Society and the OpenCog Foundation; Vice Chairman of futurist nonprofit Humanity+; Scientific Advisor of biopharma firm Genescient Corp.; Advisor to the Singularity University; Research Professor in the Fujian Key Lab for Brain-Like Intelligent Systems at Xiamen University, China; and general Chair of the Artificial General Intelligence conference series, an American author and researcher in the field of artificial intelligence. He is an advisor to the Machine Intelligence Research Institute (formerly the Singularity Institute) and formerly its Director of Research.[1]

Alvin Toffler Alvin Toffler (born October 4, 1928) is an American writer and futurist, known for his works discussing the digital revolution, communication revolution and technological singularity. He founded Toffler Associates, a management consulting company, and was a visiting scholar at the Russell Sage Foundation, visiting professor at Cornell University, faculty member of the New School for Social Research, a White House correspondent, an editor of Fortune magazine, and a business consultant.[3] Toffler is married to Heidi Toffler, also a writer and futurist. They live in the Bel Air section of Los Angeles, California, just north of Sunset Boulevard.