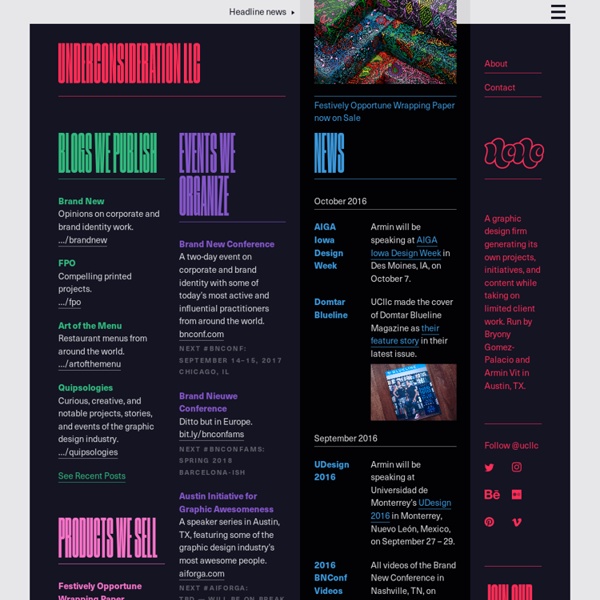 Best user interface designers on Earth - GoldtreeGoldtree User Interface designers are that rare breed of individuals that build those beautiful layouts that we spend 50 to 65% of our lives staring at. Some of them are like rock stars in the design communities and some of them are obscured behind corporate non-disclosure agreements that will make seasoned attorneys cringe in fear. Their work may probably never be seen in the public domain. You probably missed: Best User Interface Designs of Android L / Material Design

Focus Hub Photography Courses Blog For his latest multimedia project, Natural Beauty, James Houston was inspired by nature, with the goal to raise awareness and funds for the environment and sustainable living. Created in partnership with MILK and environmental non-profit Global Green USA, Houston shot a series of striking portraits featuring some of the world’s leading celebrities and models including Adrian Grenier, Emma Watson, Christy Turlington, Karlie Kloss, Arizona Muse and Anja Rubik. These captivating photographs bring together two of Houston’s great passions – the human form and the natural world.

25 Christmas Inspired Free Fonts Resources November 30, 2012 Hello creatives! December is officially on so the most celebrated time of the year in most countries is just a few days to go. For designers and creatives, Christmas is not just a season for giving and a moment to spend time with loved ones but also a nice opportunity for possible design projects for the holidays. So today in You The Designer, we give you a nice collection of 25 free fonts just perfect for those Christmas themed designs you might be working on.

32 Productivity Tips From The World's Top Designers Even if you're working your dream job, staying productive can be tough. That's why designers are such productivity experts: time after time, they overcome the temptation to slack so they can brainstorm new ideas, find fresh solutions, and get things done—all while hitting deadlines and keeping things under budget. We asked dozens of designers from Google, Argo Design, Huge, ustwo, Sagmeister and Walsh, Moving Brands, OKFocus, and more about their best tips for staying productive. The answers we got back range from the physical to the mental to the chemical. Staying productive is a personal thing, but we guarantee at least one of these tips will work for you.

Write for Cracked.com If you prefer writing bite-sized comedy, we're always looking for people to create or write the sorts of funny charts/infographics that are so popular on the internet these days (like Dreams: Inception vs. Reality [CHART]). You can post them right now. Here's how:If you want to make a chart or infographic about current events (news, politics, sports or other stuff going on in pop culture) post it here. If you have any other possible idea for an infographic or are not sure where it goes, post it here. If we like it, we'll put it on the front page and you'll get paid.

The 200 Best App & Web Design Tools & Resources (Categorized) This post is #21 in DailyTekk’s famous Top 100 series which explores the best startups, gadgets, apps, websites and services in a given category. Total items listed: 198. Time to compile: 8+ hours. Follow @DailyTekk on Twitter to make sure you don’t miss a week! Well we’re back at it again making another one of our infamous Top 100 Tech lists (many of which have been shared hundreds of thousands of times), except this time we’re aiming our sights at the world of graphic, app and web design (and we’ve doubled the scope to 200 amazing items). Creative Review - With the Tour de France starting in July, Yellow Jersey Press has reissued five classic cycling books with covers referencing some of the most famous colours in the sport... Our Ad of the Week is the Oreo Snack Hacks campaign, which sees the cookie brand invite three LA chefs to use the biscuits to make new, unexpected snacks – some that look pretty disgusting, others surprisingly tasty... Damien Florébert Cuypers has animated a series of shorts for furniture brand Herman Miller, in which 80-year-old Hilda Longinotti reflects on her 21-year tenure at design director George Nelson's New York studio. Design studio Kellenberger-White has created a hand painted font and identity system for arts festival Glasgow International. This week's round-up of new ads features some lovely print work, web work, ambient (is that phrase still used?) work, as well as some great films.

Neil Watson Have a look at the showcase of Neil Watson personal creative work and commercial commissions over the last 8 years working in retail, luxury and fashion. How to become an awesome designer in 365 days One of the old saying that motivate me is “Practice makes perfect”. Proverbs can be a bit of a cliché, but in some cases they can be true. I am a workaholic by nature, which obviously has its good and bad sides. Xbox 360 system software Xbox 360 Dashboard (or System Updates), is the updatable software and operating system for the Xbox 360. It resides on a 16 MB file system and has access to a maximum of 32 MB of the system's memory.[1] While the system software updates may sometimes provide updates to the system's firmware, it is unlikely that this occurs with many, if any, updates. The updates can be downloaded from the Xbox Live service directly to the Xbox 360 and subsequently installed. Microsoft has also provided the ability to download system software updates from their respective official Xbox website to their PCs and then storage media, from which the update can be installed to the system. The Xbox 360 game system allows users download applications that add to the functionality of the dashboard. The current public version of the Xbox 360 system software is 2.0.16747.0, released April 1, 2014.

Popup Vex is a modern dialog library which is highly configurable, easily stylable, and gets out of the way. You’ll love vex because it’s tiny (6kb minified, 2kb minifed + gzipped), has a clear and simple API, works on mobile devices, and can be customized to match your style in seconds. It supports built in CSS spinner for asynchronous dialogs. You can open multiple dialogs at once and close them individually or all at once. So you want to create a font. Part 1 By Alec Julien So you’re a brilliant designer, a master calligrapher, and you’ve learned all about serifs, side-bearings, and kerning. Now you want to create your own font. (What! You haven’t learned all about serifs, side-bearings, and kerning? Well, make sure you read all of the articles on iLT before you embark on font creation! 20 Pieces of Advice from 20 Illustrators 20 Pieces of Advice from 20 Illustrators In preparation for her awesome upcoming online workshop Building a Freelance Illustration Business, Illustrator Salli Swindell decided to reach out and get some thoughts from other artists. The question was “What’s one piece of advice you would share with other illustrators?”

Here Comes the Literotica Valentine's Day Story Contest! - Literotica Discussion Board -->If you'd like to participate in this contest, please read this entire post. If you don't read the whole thing, you may miss out on important rules, rendering your story ineligible for the contest!<-- You can begin submitting on (or a little before): January 20 The last day to submit is: February 5 at 11:59EST Winners will be announced on: February 12 This contest will coexist with the usual monthly contest. Stories may only win one or the other, not both contests simultaneously.