Chat Bot. Jürgen Röhm · Interaction Designer. I recently did some research on a UI pattern called “natural language form” and got quite excited about it. 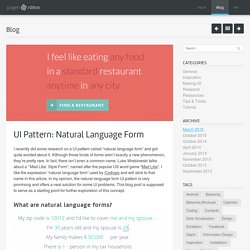 Although those kinds of forms aren’t exactly a new phenomenon, they’re pretty rare. In fact, there isn’t even a common name. Luke Wreblowski talks about a “‘Mad Libs’ Style Form”, named after the popular US word game “Mad Libs“. I like the expression “natural language form” used by Codrops and will stick to that name in this article. In my opinion, the natural language form UI pattern is very promising and offers a neat solution for some UI problems. 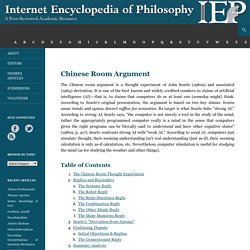 It is one of the best known and widely credited counters to claims of artificial intelligence (AI)---that is, to claims that computers do or at least can (someday might) think. According to Searle's original presentation, the argument is based on two key claims: brains cause minds and syntax doesn't suffice for semantics. Its target is what Searle dubs "strong AI. " According to strong AI, Searle says, "the computer is not merely a tool in the study of the mind, rather the appropriately programmed computer really is a mind in the sense that computers given the right programs can be literally said to understand and have other cognitive states" (1980a, p. 417). Searle contrasts strong AI with "weak AI. " Table of Contents 1.

But in imagining himself to be the person in the room, Searle thinks it's "quite obvious . . . 2. A. B. C. All Talk and No Buttons: The Conversational UI · An A List Apart Article. We’re witnessing an explosion of applications that no longer have a graphical user interface (GUI).

They’ve actually been around for a while, but they’ve only recently started spreading into the mainstream. They are called bots, virtual assistants, invisible apps. They can run on Slack, WeChat, Facebook Messenger, plain SMS, or Amazon Echo. They can be entirely driven by artificial intelligence, or there can be a human behind the curtain. Article Continues Below My own first encounter with a conversational interface was back in 1983.

We immediately realize that this computer is operating at a different level: it engages in conversation with Lightman, asks him how he feels, and offers to play some games. Fast-forward 30 years. First we sketched out a web page; then we built an Android app, then an iOS app, and finally an Outlook add-in. After building user interfaces for more than 15 years, for the first time I felt that the interface was seriously limiting what I was trying to do. Easy. Introduction to Artificial Intelligence for UX Designers. If you work in the world of product design, you’re probably hearing a lot about how artificial intelligence (AI) is going to change everything in the next few years. 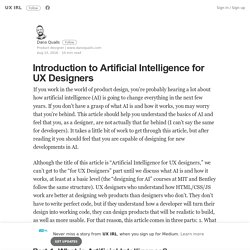 If you don’t have a grasp of what AI is and how it works, you may worry that you’re behind. This article should help you understand the basics of AI and feel that you, as a designer, are not actually that far behind (I can’t say the same for developers). It takes a little bit of work to get through this article, but after reading it you should feel that you are capable of designing for new developments in AI.

Although the title of this article is “Artificial Intelligence for UX designers,” we can’t get to the “for UX Designers” part until we discuss what AI is and how it works, at least at a basic level (the “designing for AI” courses at MIT and Bentley follow the same structure). A Designer's Guide To The $15 Billion Artificial Intelligence Industry. Physics can be difficult to grasp—even for adults. 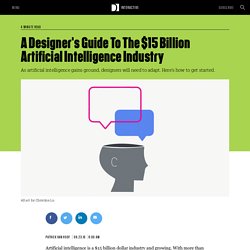 So how do you teach the subject's abstract ideas to middle schoolers? Show some of the concepts in action. That's the idea behind Peer, an experimental project from New York-based design firm Moment that uses mixed reality to teach middle schoolers scientific ideas such as aerodynamics, sound waves, gravity, and acceleration.

The project, though purely conceptual, is a tantalizing hint at where technology in the classroom could be headed next. A lesson in aerodynamics, for instance, would start when students strap on a VR headset, like Google Cardboard or Daydream. This isn't the only lesson the Peer team, composed of designers Andrea Everman, Sarah Mitrano, Ian Morrow, and Daniel Park, imagines—similar hardware could be used to test the acceleration of pinewood derby cars. Peer's design incorporated his feedback. Could mixed reality be education's next big tech tool, a follow-up to the iPads that infiltrated schools everywhere? Meetup Star d'UX - Diffusion en direct de UX-REPUBLIC.