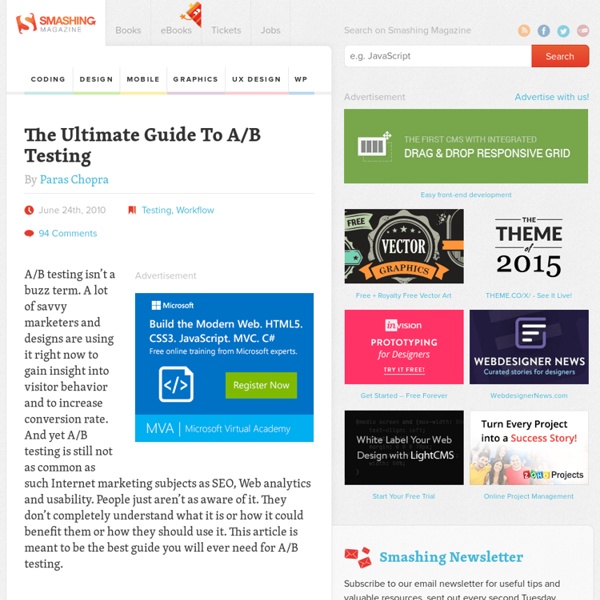 Advertisement A/B testing isn’t a buzz term. A lot of savvy marketers and designs are using it right now to gain insight into visitor behavior and to increase conversion rate. And yet A/B testing is still not as common as such Internet marketing subjects as SEO, Web analytics and usability. People just aren’t as aware of it. What Is A/B Testing? At its core, A/B testing is exactly what it sounds like: you have two versions of an element (A and B) and a metric that defines success. This is similar to the experiments you did in Science 101. 1Large version2 A/B testing on the Web is similar. What To Test? Your choice of what to test will obviously depend on your goals. Even though every A/B test is unique, certain elements are usually tested: Create Your First A/B Test Once you’ve decided what to test, the next step, of course, is to select a tool for the job. You can set up an A/B test in one of two ways: Do’s And Don’ts Don’ts Do’s Know how long to run a test before giving up. Which Test Won? (al)

WebScarab Getting Started WebScarab has a large amount of functionality, and as such can be quite intimidating to the new user. But, for the simplest case, intercepting and modifying requests and responses between a browser and HTTP/S server, there is not a lot that needs to be learned. Initially, I will assume that you have full unrestricted access to the Internet (that is, you are not behind a proxy). This is what WebScarab looks like at startup. Firstly, the toolbar provides access to the various plugins, as well as the Summary window (main view), and messages (log) window. The Summary window is split into two parts. In order to start using WebScarab as a proxy, you need to configure your browser to use WebScarab as a proxy. WebScarab defaults to using port 8008 on localhost for its proxy. You should see something similar to the next image. Here you can see the tree of URL's, which represents the site layout, as well as the individual conversations that have passed through WebScarab.

Test Driven Development in XCode — Jayway Team Blog by Christian Hedin - Testing Test Driven Development, or TDD for short, is a simple software development practice where unit tests, small focused test cases, drive the development forward. This is most easily explained by the Three Rules of TDD that dictate the following: You are not allowed to write any production code unless it is to make a failing unit test pass.You are not allowed to write any more of a unit test than is sufficient to fail; and compilation failures are failures.You are not allowed to write any more production code than is sufficient to pass the one failing unit test. That means that test cases are written before any production code. Not all tests are written up front, it’s rather that a small test is written, then a small piece of production code is written that only allows that test to pass. Many people consider TDD to encourage clean code, simple architectures and a stable system that’s actually testable. Creating the Calculator project Writing test cases Wrapping up

Sahi Welcome to JUnit.org! | JUnit.org Michael Bolton&#039;s Blog | testingReflections.com Observations on software testing and quality from DevelopSense Traceability matrix A requirements traceability matrix may be used to check to see if the current project requirements are being met, and to help in the creation of a request for proposal,[1] software requirements specification,[2] various deliverable documents, and project plan tasks.[3] Common usage is to take the identifier for each of the items of one document and place them in the left column. The identifiers for the other document are placed across the top row. When an item in the left column is related to an item across the top, a mark is placed in the intersecting cell. To ease the creation of traceability matrices, it is advisable to add the relationships to the source documents for both backward traceability and forward traceability. Sample traceability matrix[edit] See also[edit] References[edit] Jump up ^ Egeland, Brad (April 25, 2009). External links[edit]

Reasons to Repeat Tests - James Bach - Satisfice, Inc. by James Bach (with help from colleagues Doug Hoffman, Michael Bolton, Ken Pugh, Cem Kaner, Bret Pettichord, Jim Batterson, Geoff Sutton, plus numerous students who have participated in the "Minefield Debate" as part of my testing class. The minefield analogy as I talk about it was inspired by Brian Marick's talk Classic Testing Mistakes.) Testing to find bugs is like searching a minefield for mines. If you just travel the same path through the field again and again, you won't find a lot of mines. Actually, that's a great way to avoid mines. The minefield analogy is really just another way of saying that testing is a sampling process, and we probably want a larger sample, rather than a tiny sample repeated over and over again. But what do I mean by repeat the same test? Therefore, by a repeated test, I mean a test that includes elements already known to be covered in other tests. If you disagree with this idea, or if you agree with it, please read further. Here's how I think it applies:

appsec - Can I block based on Mac Address ? - IT Security - Stack Exchange An old topic, but none of the answers are complete. I'm assuming it's no problem to bump this. In short, the answer is no, you usually can't block based on MAC address. And if you could, it would be useless. To understand why, you must know a thing or two about how the internet works. Communication between devices is commonly done via the Ethernet protocol (wiki), and despite the source and destination being identified by IP, actual communication is done per MAC. If the client wants to send a packet to the server, it first checks whether the server is in the same subnet. Source IP: 192.168.1.100 (belongs to: Client) Destination IP: 10.1.1.1 (belongs to: Server) Source MAC: 01:01:01:02:02:02 (belongs to: Client) Destination MAC: 02:01:01:02:02:02 (belongs to: R1) Then R1 is like "Oh, that IP is somewhere on the internet". Moving forward, R2 will not tamper with any of the IPs like R1 did because it is not a NAT router (like most consumers have).